Was Beethoven Black? Was His African Heritage Whitewashed? - Ron Powell. In the 15th and 16th century, written history underwent a massive campaign of misinformation and deception. 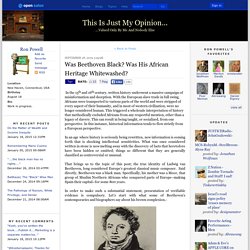 Deep Racism: The Forgotten History Of Human Zoos. Racism is deeply embedded in our culture. 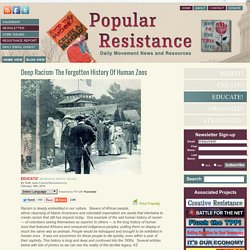 Slavery of African people, ethnic cleansing of Native Americans and colonialist imperialism are seeds that intertwine to create racism that still has impacts today. One example of the sad human history of racism — of colonizers seeing themselves as superior to others — is the long history of human zoos that featured Africans and conquered indigenous peoples, putting them on display in much the same way as animals. People would be kidnapped and brought to be exhibited in human zoos.

It was not uncommon for these people to die quickly, even within a year of their captivity. This history is long and deep and continued into the 1950s. An Albino Model Has Had To Explain Why He's Black. And Not. At The Same Time. What Happens When 3 Black Women Ask People To Touch Their Hair? Archbishop of Canterbury urges Britain to open doors to persecuted Iraqi Christians. In 2003, before the allied invasion, there were about a million Christians, in Iraq. 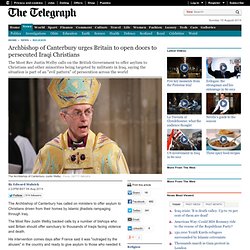 About three quarters have left since amid the civil war and targeted attacks by jihadists. On Thursday Islamic State fighters swept aside resistance to seize the last remaining Christian towns of northern Iraq. All Christians were told to leave the city of Mosul last month, with the 20 too old to leave said by the church to have been forcibly converted to Islam. What Happened When One Woman Had Her Picture Photoshopped In 25 Different Countries. “Make me look beautiful.” 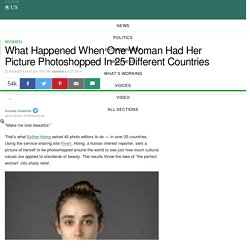 That’s what Esther Honig asked 40 photo editors to do — in over 25 countries. Using the service-sharing site Fiverr, Honig, a human interest reporter, sent a picture of herself to be photoshopped around the world to see just how much cultural values are applied to standards of beauty. The results throw the idea of “the perfect woman” into sharp relief. Honig found that individuals from every country applied a distinct perspective on beauty to her image.

5 year old niglet found dead. 5 Types of “Conscious” Black People To Avoid If You Want To Grow. It is my theory that the black conscious community is nothing more than a “thought trap”. 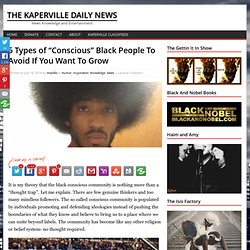 Let me explain. There are few genuine thinkers and too many mindless followers. The so called conscious community is populated by individuals promoting and defending ideologies instead of pushing the boundaries of what they know and believe to bring us to a place where we can unite beyond labels. The community has become like any other religion or belief system- no thought required. There are more people talking about what we should be doing in our communities than there are doing anything to help our communities.

Just like in any “ism”, to be accepted in the black conscious community, you have to think, believe, and regurgitate, the same old information that everyone else does…oh and say hotep at the beginning and end of every conversation. It wasn’t until I began to disassociate myself from the black con-science community that I began to think. 15 Controversial Pulled Ads. Ads are often meant to provoke the viewer (think baby-faced Brooke Shields with nothing between her and her Calvins) but sometimes viewers feel a little too provoked. 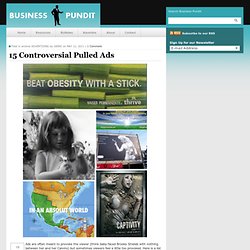 Here is a list of fifteen controversial advertisements that were pulled due to negative reactions. ICBC Anti-Drunk Driving Campaign Image Source Back in May of 2010, the Insurance Corporation of British Columbia, Canada, Police Services and the Superintendent of Motor Vehicles launched an ad campaign comprised of three ads that compared getting caught driving under the influence to getting caught doing something else embarrassing.

Like, for example, police catching you measuring your manhood. Sure, someone catching you measuring yourself is awkward, but a DUI? Rachel Ray for Dunkin’ Donuts In 2008, Rachel Ray, queen of the quick and easy meal, fairly inoffensive person all things considered, shot what seemed like a pretty simple commercial for Dunkin’ Donuts coffee. Verizon Ad. 41 Mind-Blowingly Racist Vintage Ads You Need To See. If You Have To Tell Your Kids This Stuff, Then You Probably Aren't A White Person. Theresa May's immigration bill is a valuable tool for racist landlords. When my mum first came to Britain from Jamaica in the 60s, overt racism was just a normal part of her day-to-day experience. 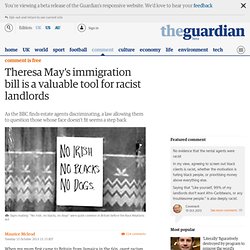 She never tires of telling me about the famous "No blacks, no Irish, no dogs" signs that landlords put up on properties. In those days before equality regulation, bigotry didn't need to hide behind plastic smiles – it was allowed to roam free and unashamed. The Race Relations Act 1976 was supposed to put an end to all that, and the Equalities Act 2010 reinforced the message that discriminating against someone because of the colour of their skin was unacceptable. Among other measures, the act made it "unlawful for a person who has the authority to dispose of premises to discriminate against or victimise someone else … by not letting or selling the premises to them".

Study: Whites Think Black People Feel Less Pain. Government ready to hit football with bill to push through reforms. The government has issued a stark final warning to football, making it clear that it is already drawing up legislation in an effort to force the game into long overdue reforms, including becoming more diverse and involving fans in the running of clubs. 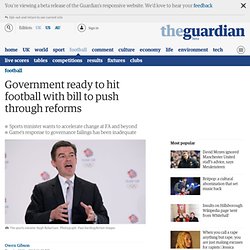 In a letter to the culture, media and sport select committee, which published its initial report on the game's governance failings in July 2011 and then in January this year made clear its displeasure at football's inadequate response, the sports minister, Hugh Robertson, reveals he has obtained permission from the Parliamentary Counsel to draw up the draft bill. While successive sports ministers have attempted to threaten and cajole the Football Association and the game at large into action, Robertson is the first to begin working up a draft bill.

EDL marches on Newcastle as attacks on Muslims increase tenfold in the wake of Woolwich machete attack which killed Drummer Lee Rigby - Crime - UK. Muslim leaders have accused far-right extremists of trying to capitalise on the “sick and barbaric” murder of Lee Rigby to fuel racial hatred. 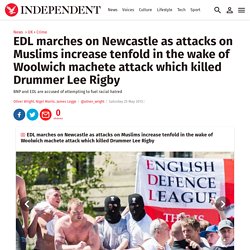 Islamophobic hate crimes are running at more than 10 times their usual rate, with more than 140 reported to a government-backed hotline in the 48 hours since the Woolwich killing. They include nine attacks on mosques, assaults, racial abuse and anti-Muslim graffiti. An improvised petrol bomb was thrown at a mosque in Milton Keynes during Friday prayers, while attacks have also been reported in Gillingham, Braintree, Bolton and Cambridge. The British National Party leader, Nick Griffin, who visited Woolwich yesterday, provoked widespread disgust for tweeting that the alleged killers should be wrapped in “pig skin” and shot again.

The English Defence League, which has said the killing shows Britain is “at war” with Islamic extremism, staged a march today in Newcastle, sparked by plans to open an Islamic school. Was Beethoven Black? Was His African Heritage Whitewashed? - Ron Powell. Great White Desert.