Music revolution hits Delhi jail. It may not have been Johnny Cash playing Folsom prison but it was about as close as India could get: 1,000 or so prisoners, most serving long sentences for serious violent crimes, in the yard of Tihar, Delhi's high-security prison, with a stage, a sound system, a shiny pink-and-white marquee for dignitaries, soft drinks and biscuits. 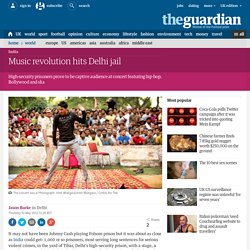 Bollywood numbers belted out by the jail band, a hip-hop collective and the Indian capital's best-known (indeed only) ska outfit provided the entertainment. The concert, the first of its kind, was part of a new initiative by local prison authorities to use music to rehabilitate hardened prisoners. "The only other thing we had was a concert of classical Bengali music. This is the first time we are trying something western," said Neeraj Kumar, the director general of Delhi's prisons and the man ultimately responsible for 12,000 prisoners.

Kumar explained he wanted music to be an essential part of the prison routine. Additional reporting by Aparna Alluri. Dancing Makes You Smarter. For centuries, dance manuals and other writings have lauded the health benefits of dancing, usually as physical exercise. 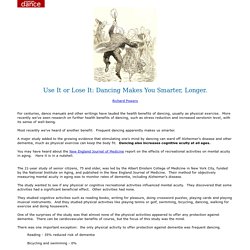 More recently we've seen research on further health benefits of dancing, such as stress reduction and increased serotonin level, with its sense of well-being. Most recently we've heard of another benefit: Frequent dancing apparently makes us smarter. A major study added to the growing evidence that stimulating one's mind by dancing can ward off Alzheimer's disease and other dementia, much as physical exercise can keep the body fit. Dancing also increases cognitive acuity at all ages. You may have heard about the New England Journal of Medicine report on the effects of recreational activities on mental acuity in aging. Why Is Dancing So Good for Your Brain? Dancing Shown To Help Boost Happiness And Mental Health - Prevention.com. So you think you can’t dance? 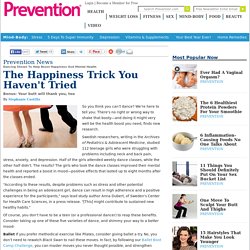 We're here to tell you: There's no right or wrong way to shake that booty—and doing it might very well be the health boost you need, finds new research. Swedish researchers, writing in the Archives of Pediatrics & Adolescent Medicine, studied 112 teenage girls who were struggling with problems including neck and back pain, stress, anxiety, and depression. Half of the girls attended weekly dance classes, while the other half didn't. The results? The girls who took the dance classes improved their mental health and reported a boost in mood—positive effects that lasted up to eight months after the classes ended. 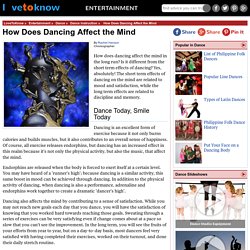 Is it different from the short term effects of dancing? Yes, absolutely! The short term effects of dancing on the mind are related to mood and satisfaction, while the long term effects are related to discipline and memory. Dance Today, Smile Today Dancing is an excellent form of exercise because it not only burns calories and builds muscles, but it also contributes to an overall sense of happiness. Endorphins are released when the body is forced to exert itself at a certain level. Dancing also affects the mind by contributing to a sense of satisfaction. How Does Dancing Affect the Mind More Permanently. Health & Fitness Experts - Google Drive. Psychological effects of dance - Google Drive. Mental And Cognitive Benefits Of Dancing Makes You Smarter. Health, Senior, Santa Monica Posted Nov. 11, 2012, 1:07 am Special To The Mirror By Mark Underwood If you’ve ever watched ABC’s hit TV show “Dancing with the Stars,” then you know that dancing is hard work. 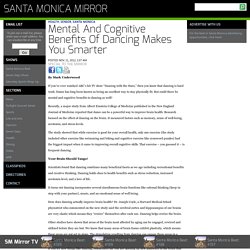 Dance has long been known as being an excellent way to stay physically fit. Recently, a major study from Albert Einstein College of Medicine published in the New England Journal of Medicine reported that dance can be a powerful way to improve brain health. The study showed that while exercise is good for your overall health, only one exercise (the study included other exercise like swimming and biking and cognitive exercise like crossword puzzles) had the biggest impact when it came to improving overall cognitive skills.

Your Brain Should Tango! Scientists found that dancing combines many beneficial facets as we age including recreational benefits and creative thinking. Dance therapy for mental patients. Dancing may be a way to tone the body, but it is also a dynamic way to exercise the mind, say health experts. 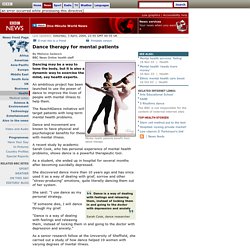 An ambitious project has been launched to use the power of dance to improve the lives of people with mental illness to help them. The Reach4Dance initiative will target patients with long-term mental health problems. Dance and movement are known to have physical and psychological benefits for those with mental illness. A recent study by academic Sarah Cook, who has personal experience of mental health problems, shows dance is a powerful therapeutic tool. As a student, she ended up in hospital for several months after becoming suicidally depressed. She discovered dance more than 10 years ago and has since used it as a way of dealing with grief, sorrow and other "stress-producing" emotions, quite literally dancing them out of her system. She said: "I use dance as my personal strategy. "If someone dies, I will dance through my grief. Self esteem Much of the work will be done with women. Eh252lab.pdf.