5 things you should know about Immigration in Minnesota - Minnesota Compass. July, 2013 While Minnesota still has proportionally fewer immigrants than the U.S. as a whole (7% compared with 13% nationally), the state’s foreign-born population is actually increasing faster than the national average—in Minnesota, it has tripled since 1990, but only doubled nationally. 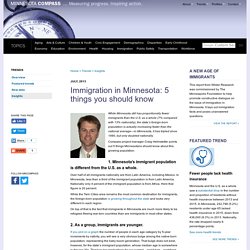 Compass project manager Craig Helmstetter points out 5 things Minnesotans should know about this growing population. 1. Minnesota’s immigrant population is different from the U.S. as a whole. Over half of all immigrants nationally are from Latin America, including Mexico. While the Twin Cities area remains the most common destination for immigrants, the foreign-born population is growing throughout the state and looks very different in each region. On top of that is the fact that immigrants in Minnesota are much more likely to be refugees fleeing war-torn countries than are immigrants in most other states. 2. 3. 4. 5.

Almost by definition immigrants are a diverse group. Immigration Overview - Minnesota Compass. Quickly access information about Minnesota's diverse and burgeoning immigrant population While Minnesota still has proportionally fewer immigrants than the U.S. as a whole (8% compared with 13% nationally), the state’s foreign-born population is actually increasing faster than the national average—in Minnesota, it has tripled since 1990, but only doubled nationally. 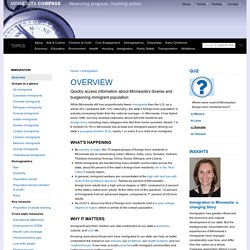 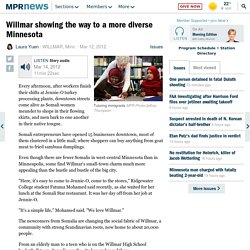 Somali entrepreneurs have opened 15 businesses downtown, most of them clustered in a little mall, where shoppers can buy anything from goat meat to fried sambusa dumplings. Even though there are fewer Somalis in west-central Minnesota than in Minneapolis, some find Willmar's small-town charm much more appealing than the hustle and bustle of the big city. "Here, it's easy to come to Jennie-O, come to the stores," Ridgewater College student Fatuma Mohamed said recently, as she waited for her lunch at the Somali Star restaurant. It was her day off from her job at Jennie-O. "It's a simple life," Mohamed said. From an elderly man to a teen who is on the Willmar High School basketball team, Somalis say the city has embraced them. STORIES — Promise. Promise Peter Garrard Beck Promise Immigrants: Portraits and Stories. 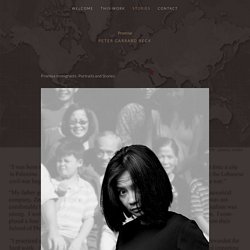 5 immigration stories to watch in 2017. In 2016, immigration issues took center stage in the United States, thanks to a presidential campaign and the influx of refugees and migrants escaping violence in the Middle East and Central America. 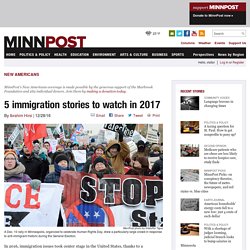 In response, many Republican leaders proposed tougher laws restricting entry of certain groups. President-elect Donald Trump, for instance, vowed to erect a wall along the U.S. -Mexico border, deport unauthorized immigrants and bar Muslim refugees from entering the country. If Trump follows through on those campaign pledges, his immigration policy proposals will impact many of the 400,000 foreign-born Minnesotans and their loved ones. Looking ahead to 2017, with a new administration coming to the White House and new officials taking seats at the State Capitol, immigration issues will remain crucial. 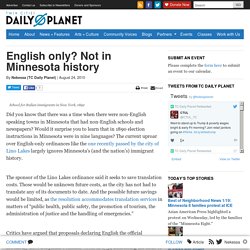 Would it surprise you to learn that in 1890 election instructions in Minnesota were in nine languages? The current uproar over English-only ordinances like the one recently passed by the city of Lino Lakes largely ignores Minnesota’s (and the nation’s) immigrant history. The sponsor of the Lino Lakes ordinance said it seeks to save translation costs. Those would be unknown future costs, as the city has not had to translate any of its documents to date. And the possible future savings would be limited, as the resolution accommodates translation services in matters of “public health, public safety, the promotion of tourism, the administration of justice and the handling of emergencies.” Critics have argued that proposals declaring English the official language of cities or states are hostile to immigrants.