Nand2tetris. Programming Language Awareness Centre. The Computer Magazine Archives : Free Texts : Free Download, Borrow and Streaming. Byte magazine was a microcomputer magazine, influential in the late 1970s and throughout the 1980s because of its wide-ranging editorial coverage. 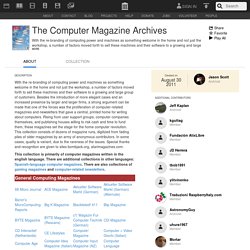 Whereas many magazines from the mid-1980s had been dedicated to the MS-DOS (PC) platform or the Mac, mostly from a business or home user's perspective, Byte covered developments in the entire field of "small computers and software", and sometimes other computing fields such as supercomputers and high-reliability computing. Coverage was... From Wikipedia: Compute! (ISSN 0194-357X) was an American computer magazine that was published from 1979 to 1994, though it can trace its origin to 1978 in Len Lindsay's PET Gazette, one of the first magazines for the Commodore PET computer. In its 1980s heyday Compute! Amiga Format was a British computer magazine for Amiga computers, published by Future plc. Digit is an Indian monthly technology magazine published by 9.9 Media. Processor Newspaper, the official paper of Processor.com. 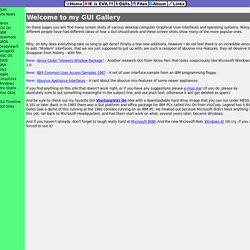 Many different people have had different ideas of how a GUI should work and these screen shots show many of the more popular ones. Why, oh why does everything take so long to get done? Finally a few new additions, however I do not feel there is an incredible amount to add. "Modern" interfaces, that we are just supposed to put up with, are such a cesspool of abusive mis-features, they all deserve to disappear from history - with fire. New: Xerox Cedar "Viewers Window Package" - Another research GUI from Xerox Parc that looks suspiciously like Microsoft Windows 1.0. New: IBM Common User Access Samples 1987 - A set of user interface sample from an IBM programming floppy. New: Abusive Appliance Interfaces - A rant about the abusive mis-features of some newer appliances. 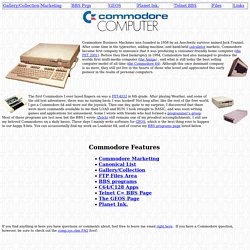 After some time in the typewriter, adding machine, and hand-held calculator markets, Commodore became first company to announce that it was producing a consumer-friendly home computer (the PET 2001). Before they filed bankruptcy in 1994, Commodore had also managed to produce the worlds first multi-media computer (the Amiga) , and what is still today the best selling computer model of all time (the Commodore 64). Although this once dominant company is no more, they still yet live in the hearts of those who loved and appreciated this early pioneer in the realm of personal computers. 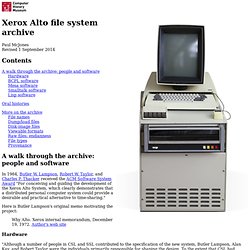 Hardware "Although a number of people in CSL and SSL contributed to the specification of the new system, Butler Lampson, Alan Kay, and Robert Taylor were the individuals primarily responsible for shaping the design. Charles P. "The concept and structure of the Alto are due primarily to Chuck Thacker, Ed McCreight, Butler Lampson, and Alan Kay. Vintage Computer Festival. Computer History Simulation Project. Long-lines.net. Textfiles.com. Computer History Museum. W1TP MUSEUM.