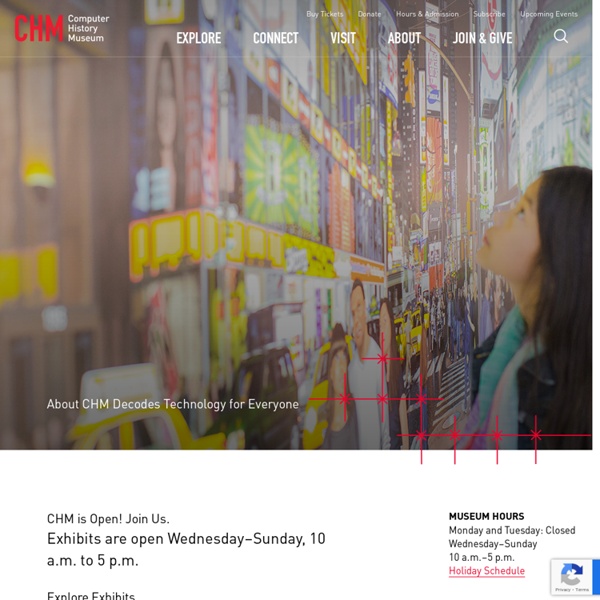 Revolutionaries Season 3 Now on KQED! Revolutionaries, the 12-part interview series produced by the Computer History Museum, in association with KQED Silicon Valley, returns for a third season. The series airs on KQED Plus on Tuesdays at 7pm, starting January 21, with an in-depth look at the sailing technology used by the 34th America’s Cup winners Oracle Team USA. The series features intriguing conversations with renowned Silicon Valley leaders and innovators with valuable insights into the process, risks, and rewards of technological innovation.

Which Of These Internet Pioneers Was Pivotal In Creating A Decentralized, Communication-Centered Internet? Answer: Robert Taylor Today it seems like an absolutely elementary concept: geographically distant computer networks are the most useful when they are all connected. It’s the fundamental underpinning of the Internet as we now know it: thousands of small networks around the world linked together into a greater network. It’s what makes sharing everything from scientific research to pictures of your cat incredibly easy and lightning fast. In the early days of computing, however, networks were in their own little silos.

Xerox Alto source code Paul McJones Revised 1 September 2014 Contents A walk through the archive: people and software Hardware BCPL software Mesa software Smalltalk software Lisp software 35 cool and fun things to try with your PC Spreadsheets, word processing and databases. Limiting a modern PC to running these bread and butter tasks is like buying a Ferrari and driving it to the corner shop. The question is, with a fast processor, a quick internet connection and a little imagination, what can a PC really do?

Computer History John Kopplin © 2002 The first computers were people! That is, electronic computers (and the earlier mechanical computers) were given this name because they performed the work that had previously been assigned to people. "Computer" was originally a job title: it was used to describe those human beings (predominantly women) whose job it was to perform the repetitive calculations required to compute such things as navigational tables, tide charts, and planetary positions for astronomical almanacs. Imagine you had a job where hour after hour, day after day, you were to do nothing but compute multiplications. Boredom would quickly set in, leading to carelessness, leading to mistakes.

How the ZX Spectrum helped bring about famed pop parody Frank Sidebottom Walk down any British high street in the 1980s, and you’d be bombarded by an array of computers for sale. The Commodore 64, Dragon 32 and Acorn Electron formed a wave of microcomputers, so-called for their small size and cost. The best remembered of all the “micros” arguably came from Cambridge based company Sinclair Research Ltd. The 50 Best How-To Geek Windows Articles of 2010 Even though we cover plenty of other topics, Windows has always been a primary focus around here, and we’ve got one of the largest collections of Windows-related how-to articles anywhere. Here’s the fifty best Windows articles that we wrote in 2010. Want even more? You should make sure to check out our top 20 How-To Geek Explains topics of 2010, or the 50 Windows Registry hacks that make Windows better.

Aho/Ullman Foundations of Computer Science This book has been taken out of print by W. H. Freeman. You are welcome to use it if you like.