C1T2abc. Is God male. Panentheism to an 8 year old. Does God have a gender? DISCUSSION - BBC Newsnight. Gender of God. The gender of God can be viewed as a literal or as an allegorical aspect of a deity. 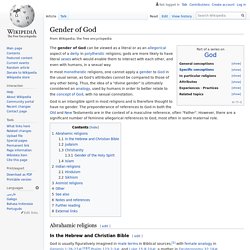 In polytheistic religions, gods are more likely to have literal sexes which would enable them to interact with each other, and even with humans, in a sexual way. In most monotheistic religions, one cannot apply a gender to God in the usual sense, as God's attributes cannot be compared to those of any other being. Thus, the idea of a "divine gender" is ultimately considered an analogy, used by humans in order to better relate to the concept of God, with no sexual connotation. Why is God not female? Only 1% of British Christians believe that God is female. Why Do We Call God "Father"? Why do we address God as “Father,” instead of “Mother”? 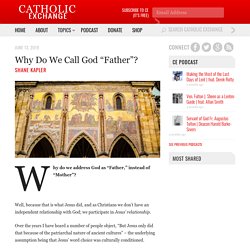 Well, because that is what Jesus did, and as Christians we don’t have an independent relationship with God; we participate in Jesus’ relationship. Over the years I have heard a number of people object, “But Jesus only did that because of the patriarchal nature of ancient cultures” – the underlying assumption being that Jesus’ word choice was culturally conditioned. Can we call God 'Mother'? Abba Isn’t Daddy – The Traditional Aramaic Father’s Day Discussion. It is traditional that I bring up the common myth that the Aramaic word “abba” means “daddy” around this time of year, but I must admit that this is the first year in a long time that sightings of that anecdote among the blogs are few. 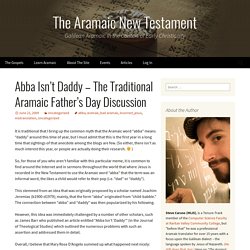 (So either, there isn’t as much interest this year, or people are actually doing their research. So, for those of you who aren’t familiar with this particular meme, it is common to find around the Internet and in sermons throughout the world that where Jesus is recorded in the New Testament to use the Aramaic word “abba” that the term was an informal word, the likes a child would refer to their pop (i.e. “dad” or “daddy”). WHY GOD IS FATHER AND NOT MOTHER. Is God really male? Grammatical gender in Hebrew and gender in the spiritual realm - ColorQ's Bible Story Corner. In the Hebrew Bible (and in translations to languages with a she/he dichotomy) God is referred to as "he". 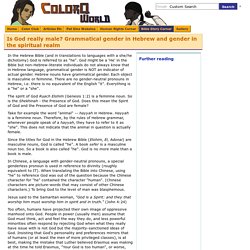 God might be a 'He' in the Bible but non-Hebrew-literate individuals do not always know that in Hebrew language, grammatical gender is NOT an indicator of actual gender. Hebrew nouns have grammatical gender. Each object is masculine or feminine. Zagano discusses women deacons on Salt+Light TV. Extract Mulieris Dignitatem - Philosophical Investigations. Commentary and Introduction Mulieris Dignitatem (the Dignity of Women) explains a Catholic Response to the Women’s movement as it entered its second wave – the deconstruction of biblical texts by feminist theologians such as Rosemary Ruether, Elisabeth Fiorenza, Phyllis Trible and Mary Daly. 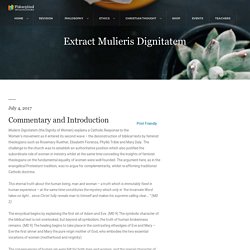 The challenge to the church was to establish an authoritative position which also justified the subordinate role of women in ministry whilst at the same time conceding the insights of feminist theologians on the fundamental equality of women were well founded. The argument here, as in the evangelical Protestant tradition, was to argue for complementarity, whilst re-affirming traditional Catholic doctrine. This eternal truth about the human being, man and woman – a truth which is immutably fixed in human experience – at the same time constitutes the mystery which only in ‘the Incarnate Word takes on light… since Christ fully reveals man to himself and makes his supreme calling clear….” Female Images of God in the Bible. Genesis 1:27 Women and Men created in God’s image “Humankind was created as God’s reflection: in the divine image God created them; female and male, God made them.” 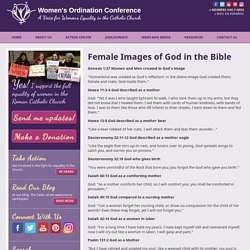 Hosea 11:3-4 God described as a mother God: “Yet it was I who taught Ephraim to walk, I who took them up in my arms; but they did not know that I healed them. I led them with cords of human kindness, with bands of love. Is God male? Flashcards. Boston Collaborative Encyclopedia of Western Theology: Sallie McFague. McFague, Sallie Contents The Theology of Sallie McFague (Wesley J. 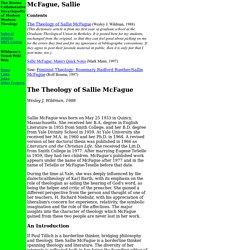 Wildman, 1988) (This dictionary article is from my first year of graduate school at the Graduate Theological Union in Berkeley. It is posted here for my students, unchanged from the original, so that they can feel good about picking on me for the errors they find and for my ignorance of bibliographic conventions. If they agree to post their juvenile material in public, then it is only fair that I post mine, too.) Sallie McFague: Mann's Quick Notes (Mark Mann, 1997) See: Feminist Theology: Rosemary Radford Ruether/Sallie McFague (Rolf Bouma, 1997) Sallie McFague - Wikipedia. Sallie McFague (1933-) is an American feminist Christian theologian, best known for her analysis of how metaphor lies at the heart of how we may speak about God. 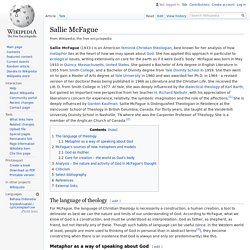 She has applied this approach in particular to ecological issues, writing extensively on care for the earth as if it were God’s ‘body’. McFague was born in May 1933 in Quincy, Massachusetts, United States. She gained a Bachelor of Arts degree in English Literature in 1955 from Smith College, and a Bachelor of Divinity degree from Yale Divinity School in 1959. She then went on to gain a Master of Arts degree at Yale University in 1960 and was awarded her Ph.D. in 1964 - a revised version of her doctoral thesis being published in 1966 as Literature and the Christian Life.

She received the Litt. The language of theology[edit] For McFague, the language of Christian theology is necessarily a construction, a human creation, a tool to delineate as best we can the nature and limits of our understanding of God. [edit] LP1 McFagueNotes.