How To Recreate The Classic Pong Game Using Arduino. Pong was the first ever videogame that reached the mass market. 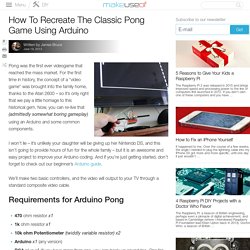 For the first time in history, the concept of a “video game” was brought into the family home, thanks to the Atari 2600 – so it’s only right that we pay a little homage to this historical gem. Now, you can re-live that (admittedly somewhat boring gameplay) using an Arduino and some common components. I won’t lie – it’s unlikely your daughter will be giving up her Nintendo DS, and this isn’t going to provide hours of fun for the whole family – but it is an awesome and easy project to improve your Arduino coding.

And if you’re just getting started, don’t forget to check out our beginner’s Arduino guide. We’ll make two basic controllers, and the video will output to your TV through a standard composite video cable. Requirements for Arduino Pong 470 ohm resistor x11k ohm resistor x110k ohm Potentiometer (twiddly variable resistor) x2Arduino x1 (any version)RCA plug x1 (if you have more than one, you can hook up sound too. How To Make a Simple Arduino Alarm System. Advertisement Detect movement, then scare the heck out of an intruder with a high pitched alarm sounds and flashing lights. 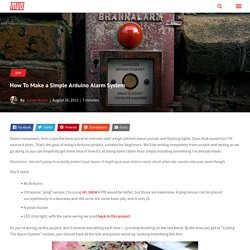 Does that sound fun? Of course it does. That’s the goal of today’s Arduino project, suitable for beginners. Victorinox Swiss Army Knife Whittling Book. Error 403. Instructions - Crafteeo. Southern Guardian Helmet Build Northern Guardian Helmet Build The 3-Step Build Process There are three major steps to the build process: (1) Preparation: Punch out or cut out all the pieces then curl or fold them, (2) Build: assemble the cutout pieces into a helmet, sword or shield, and (3) Paint: decorate your helmet, sword or shield. 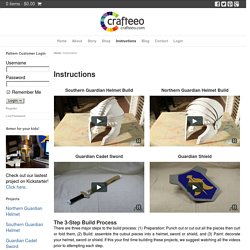 If this your first time building these projects, we suggest watching all the videos prior to attempting each step. Step 1: Preparation Step 2: Build. Simple robots. This is an example of a writing robot Handwriting is quite a difficult task for robots, but children find the result interesting. 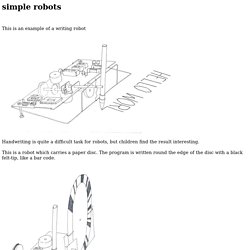 This is a robot which carries a paper disc. The program is written round the edge of the disc with a black felt-tip, like a bar code. The disc is carried by the robot rather like music on a music stand, it bears on one of the robot's axles,which rotates it so that the code passes in front of a simple light pen. This works a relay which reverses the motor driving the other axle. This next one is similar, but uses an electronic memory to store the program which it scans by rotating once on the paper disc, there is a downwards-pointing light pen at the end. A read/write switch is then pressed and a felt-tip placed in the pen holder situated between the two axles, the robot then draws in accordance with the program it remembered from the paper disc. ASCII Art Generator - Make your picture into text. Triz. Pracownia Dynamiki Morza. Bałtyk - temperatura wody z modelu HIROMB. Cardboard Boxes, Cardboard Houses i Shigeru Ban. 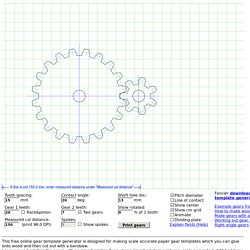 The gear generator program that I created and sell doesn't need the scale calibration, and can paginate across many pages for larger gears. How to make instant book. InventorArtist » Continuous Rotation Servo Hack. I needed motors for a small robot and I wanted to keep it simple and inexpensive. 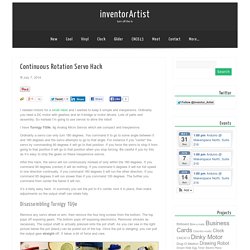 FullSolderComic_EN.pdf. Playful Bookbinding and Paper Works. October 7, 2011 How to make 2 basic Pop-ups Since I have devoted my last few posts to pop-ups, I’ve decided to put together a brief introduction to this magical bit of paper engineering. 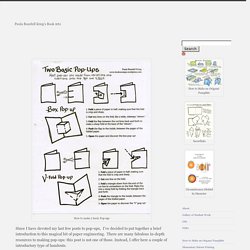 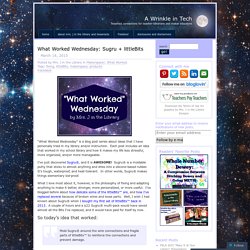 J in the Library in Makerspace! , What Worked. Tags: fixing, littleBits, makerspace, products trackback “What Worked Wednesday” is a blog post series about ideas that I have personally tried in my library and/or instruction. Some printable paper rulers. Here are some rulers you can print out. 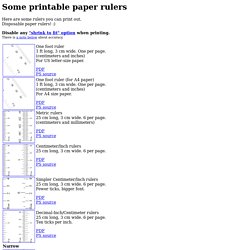 Disposable paper rulers! :) Disable any "shrink to fit" option when printing.There is a note below about accuracy. Free online dice maker, dice generator, worksheets and dice to print. From Tools for Educators: Create your own custom dice with pictures, text or both images and text. 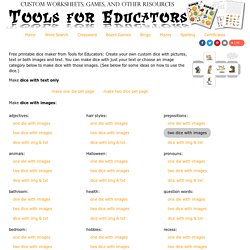 You can make dice with just your text or choose an image category below to make dice with those images. (See below for some ideas on how to use the dice.) Print Free Graph Paper. How It Works (ebook) Nico71's Lego Technic Creations.