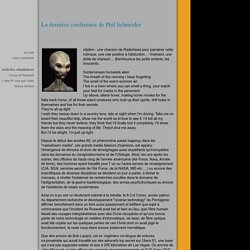 Subterranean homesick alien The breath of the morning I keep forgetting The smell of the warm summer air I live in a town where you can smell a thing, your watch your feet for cracks in the pavement Up above, aliens hover, making home movies for the folks back home, of all those wierd creatures who lock-up their spirits, drill holes in themselves and live for their secrets. They're all up-tight I wish they swoop down in a country lane, late at night when I'm driving. Take me on board their beautiful ship, show me the world as id love to see it. I'd tell all my friends but they never believe, they think that I'd finally lost it completely. I'd show them the stars and the meaning of life. 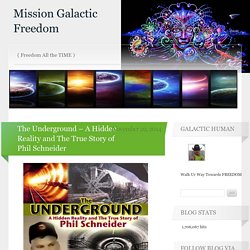 Previous to his death he had been on tour across the United States speaking out about various subjects including his involvement with building a secret underground base in Dulce, New Mexico for the military. During this time, he said to have had an encounter with a violent E.T race in the late 1970’s which would change his whole world reality immediately after. This documentary explores some of the information Phil Schneider spoke about to the public in the 1990’s by examining each claim in detail with expert opinions from Richard Dolan, Richard Sauder, Neil Gould and Cynthia Drayer (Phil’s Ex-Wife). Dulce, NATO, NORAD, Area-51, Denver Airport, Montauk, & DUMBS (Phil Schneider) Phil Schneider et la fusillade avec des extraterrestre à Dulce en 1979. Phil Schneider's Last Amazing NWO Lecture Before He Was Killed! (Before It's News) Glenn Canady (Friend me!) 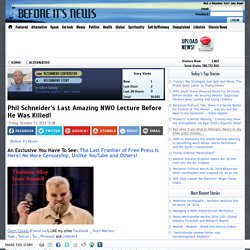 LIKE my other Facebook , Truth Warriors Page , Twitter , Tsu , Pinterest and LinkedIn! Watch the first video on www.project.nsearch.com to open a Doorway to God! Those who join Project Nsearch will discover ways to make extra income and get free ebooks on natural cures, free energy and spreading more truth! I teach others how to make real extra income on my Newsletter. Underground Bases, Child and Human Abductions, Kidnappings and More. Underground Bases, Missing Children and Extra-Terrestrials What You Need to Know for Your Future By James Casbolt, former MI6 agent – July 4, 2006 After the completion of my last article ‘MI6 are the lords of the global drug trade’ I must now present the full picture as to what the intelligence community drug trafficking money is being used for. 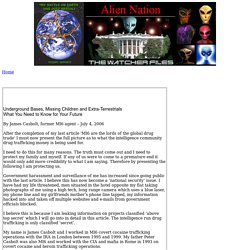 I need to do this for many reasons. The truth must come out and I need to protect my family and myself. If any of us were to come to a premature end it would only add more credibility to what I am saying. Government harassment and surveillance of me has increased since going public with the last article. Philip Schneider, Murder By Suicide? Philip Schneider was born April 23, 1947 and died (many assume murdered) in January 1996. 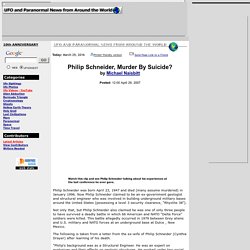 Now Philip Schneider claimed to be an ex-government geologist and structural engineer who was involved in building underground military bases around the United States (possessing a level 3 security clearance, “Rhyolite 38”). Not only that, but Philip Schneider also claimed he was one of only three people to have survived a deadly battle in which 66 American and NATO “Delta Force” soldiers were killed. This battle allegedly occurred in 1979 between Grey aliens and U.S. military and NATO forces at an underground base at Dulce , New Mexico. Philip Schneider, Murder By Suicide? - page 2. Schneider was found dead in his Wilsonville, Oregon apartment on January 17, 1996. 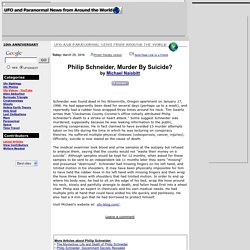 He had apparently been dead for several days (perhaps up to a week), and reportedly had a rubber hose wrapped three times around his neck. Tim Swartz writes that "Clackamas County Coroner's office initially attributed Philip Schneider's death to a stroke or heart attack. " Some suggest Schneider was murdered; supposedly because he was leaking information to the public, unveiling conspiracies. Philip Schneider: Government Secrets Revealed. By Ashley O’Toole Introduction The proverb says dead men tell no tales. 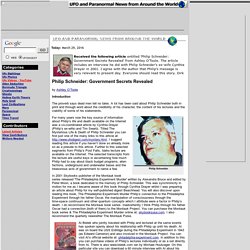 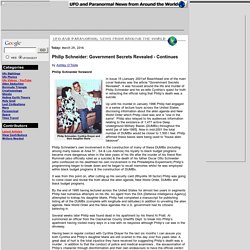 It was focused around the life and murder of Philip Schneider and his ex-wife Cynthia’s quest for truth in retracting the official ruling that Philip’s death was a suicide. Up until his murder in January 1996 Philip had engaged in a series of lecture tours across the United States disclosing information about the alien agenda and New World Order which Philip cited was and is “one in the same”.

Philip also relayed to his audiences information relating to the existence of 1,477 active Deep Underground Military Bases (DUMBs) throughout the world [as of late-1995]. It was from this point on, after cutting up his security card (Rhyolite 38 factor) Philip was going to come clean and reveal the truth about the alien agenda, New World Order, DUMBs and black budget programs. 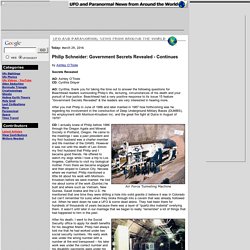 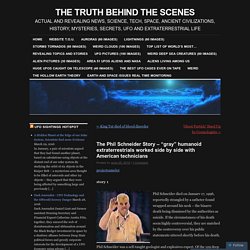 If the circumstances of his death seem highly controversial, they are matched by the controversy over his public statements uttered shortly before his death. Phil Schneider was a self-taught geologist and explosives expert. Of the 129 deep underground facilities Schneider believed the US government had constructed since World War II, he claimed to have worked on 13. Schneider maintained that numerous previous attempts had been made on his life, including the removal of the nuts from one of the front wheels of his automobile. Some of Schneider’s more major accusations are worthy of attention: 1) The American government concluded a treaty with “gray” aliens in 1954. 2) The space shuttle has been producing special alloys in orbit. Philip Schneider .... who was he?...and was he assassinated?? (Before It's News) Philip Schneider …. who was he? …and was he assassinated??

Philip Schneider (April 23, 1947 – January 1996) claimed to be an ex-government geologist and structural engineer who was involved in building underground military bases around the United States (possessing a level 3 security clearance, “Rhyolite 38″), and to be one of only three people to have survived a deadly battle in which 66 American and NATO “Delta Force” soldiers were killed. This battle allegedly occurred in 1979 between Grey aliens and U.S. military and NATO forces at an underground base at Dulce, NM [(c.f.: "The Dulce Wars: Underground Alien Bases & the Battle for Planet Earth" By Branton, "Underground Alien Bases" by Commander X and "Reality of the Serpent Race & The Subterranean Origin of the UFOs" by both)]. Background. Phil Schneider: Assassinated After Disclosure. (Before It's News) Picture of Phil Schneider Deceased with his own catheter wrapped around his neck.

This film, created by J. Ryan Daniel (me), features Phil Schneider at the Preparedness Expo in 1995 with added features along with rare photos and footage as he lectures. See more info below. Phil Schneider is an ex-government geologist and structural engineer who was involved in building underground military bases around the United States, (possessing a level 3 security clearance, “Rhyolite 38“), and to be one of only three people to have survived a deadly battle in which 66 American and NATO “Delta Force” soldiers were killed.