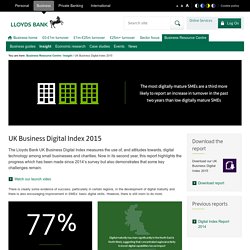 Now in its second year, this report highlights the progress which has been made since 2014’s survey but also demonstrates that some key challenges remain. Future of Skills & Lifelong Learning. 2017 NMC Horizon digital literacy impact study. The digital future of work: What skills will be needed? Robots have long carried out routine physical activities, but increasingly machines can also take on more sophisticated tasks. 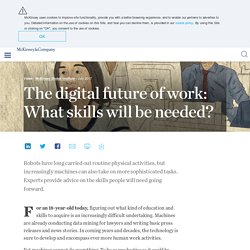 Experts provide advice on the skills people will need going forward. For an 18-year-old today, figuring out what kind of education and skills to acquire is an increasingly difficult undertaking. Machines are already conducting data mining for lawyers and writing basic press releases and news stories. In coming years and decades, the technology is sure to develop and encompass ever more human work activities. Yet machines cannot do everything. In this video, one in a four-part series, experts from academia and industry join McKinsey partners to discuss the skills likely to be in demand and how young people today can prepare for a world in which people will interact ever more closely with machines. 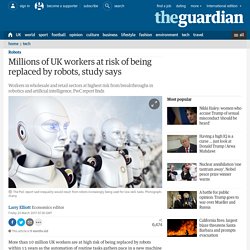 A report by the consultancy firm PwC found that 30% of jobs in Britain were potentially under threat from breakthroughs in artificial intelligence (AI). In some sectors half the jobs could go. The report predicted that automation would boost productivity and create fresh job opportunities, but it said action was needed to prevent the widening of inequality that would result from robots increasingly being used for low-skill tasks. Automation will affect one in five jobs across the UK. Robots will destroy our jobs – and we're not ready for it.

The McDonald’s on the corner of Third Avenue and 58th Street in New York City doesn’t look all that different from any of the fast-food chain’s other locations across the country. 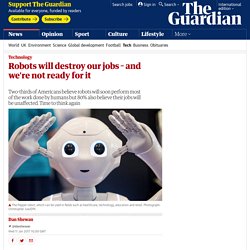 Inside, however, hungry patrons are welcomed not by a cashier waiting to take their order, but by a “Create Your Taste” kiosk – an automated touch-screen system that allows customers to create their own burgers without interacting with another human being. It’s impossible to say exactly how many jobs have been lost by the deployment of the automated kiosks – McDonald’s has been predictably reluctant to release numbers – but such innovations will be an increasingly familiar sight in Trump’s America.

Once confined to the pages of futuristic dystopian fictions, the field of robotics promises to be the most profoundly disruptive technological shift since the industrial revolution. Many of us recognize robotic automation as an inevitably disruptive force. Somehow, we believe our livelihoods will be safe. AI and robots will take our jobs - but better ones will emerge for us. An increasingly popular concern is that robots will eat up labour’s share of income at an accelerating rate, leaving ordinary workers impoverished and unemployed. 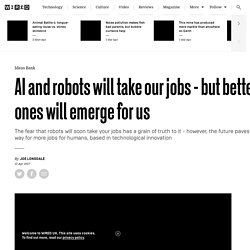 A common dinner conversation topic in Silicon Valley is universal basic income, and the typical argument advanced for UBI is that we are destined to indefinitely continue losing jobs faster than we replace them. Variants on this theme have circulated since the dawn of the Industrial Revolution. Improvements in farming technology have been greeted with skepticism since ancient times for these reasons. Mechanical contraptions for sewing and other tasks were decried as potentially ruinous to workers in Elizabethan England. Around the same time that working-class Luddite Rebellion and Captain Swing protestors rioted and destroyed machinery, upper-class Victorians issued treatises on the bleak prospects for most workers.

Will a robot take your job? Subscribe to WIRED Read more about the Taylor Review on Modern Employment Practices. CBI/Pearson education & skills survey 2017. Big Brother isn't just watching: workplace surveillance can track your every move. How can an employer make sure its remote workers aren’t slacking off? 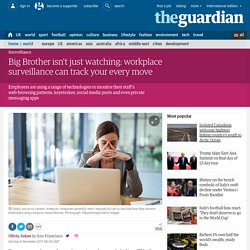 In the case of talent management company Crossover, the answer is to take photos of them every 10 minutes through their webcam. How the gig economy chews up and spits out millennials. Doug Robertson took an UberLux to his wedding. 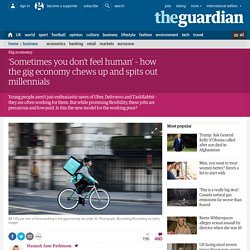 This is the ride-hailing app’s top-tier service – vehicles include Rolls-Royces, Mercedes and Bentley Flying Spurs. The driver made Robertson and his partner feel special, delivered them early and let the couple blast out Mama Cass on the stereo. Robertson, who is 28, is a big fan of Uber at a time when people’s views on the so-called “gig economy” are becoming more divided and entrenched. This has become evident in the reaction to Transport for London’s decision not to renew Uber’s licence due to the company “demonstrating a lack of corporate responsibility” in relation to driver background checks and harassment claims. Over the weekend, I used at least three services that fall under the gig-economy umbrella: Uber, Deliveroo and TaskRabbit. When it comes to working in the gig economy, Huws is clear: young people aren’t usually in it by choice.

Will Diggle, 22, is in the first year of a master’s at the Royal College of Music.