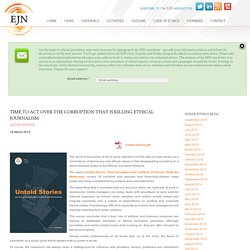 The report, Untold Stories: How Corruption and Conflicts of Interest Stalk the Newsroom, covers 18 countries and exposes how financially-stricken news media are being overwhelmed by political and corporate forces. The report finds that in countries both rich and poor, there are ‘dark arts’ at work in newsrooms: media managers are doing deals with advertisers to carry paid-for material disguised as honest news; reporters and editors accept bribes and irregular payments; and a culture of dependence on political and corporate friends makes it increasingly difficult to separate journalism from propaganda and impartial reporting from public relations.