How to Travel Cheap in Europe Via Wanderu: Visit 15 Cities for Under $500 - Thrillist. Remember when the dollar was worth about four cents on the euro and American tourists were paying, like, $14 for ketchup? 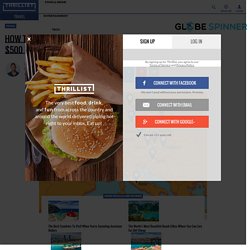 Trying to visit more than one city across the pond seemed exorbitant to the point of comedy. But favorable exchange rates have turned the tide -- the era of the dirt-cheap Euro trip is back, baby! There's no shortage of world-class destinations you can actually afford to visit right now. Thanks to a slew of sleek new bus companies, you can actually loop around 15 of Europe's grand capital cities for 500 bucks. Underrated Places to Visit for Vacation Travel in the US - Thrillist. When you think of the Florida Keys, you think of Key West in all of its excesses, both natural and man-made. 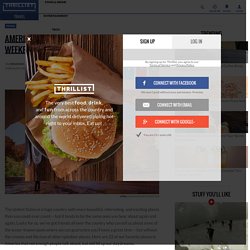 But farther up the island chain is the Keys’ best-kept secret. Islamorada gives you art galleries, sophisticated dining and lodging, and renowned fishing on both the ocean and gulf sides. It’s water sports by day and honky-tonk by night, with a more laid-back vibe than Key West. Best Winter Getaways From NYC in New York State - Thrillist. Lake Placid is best known for hosting the Winter Olympics twice, and you can trust that it’s capitalized on that legacy. 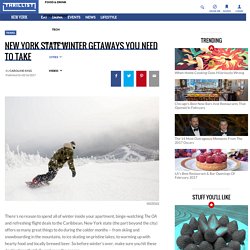 Visitors can not only get a glimpse of the history at the museums and former sports venues, but also have the opportunity to partake in some of the winter sports seen at the Games. The village is also full of natural beauty, including two lakes (Mirror Lake and Lake Placid) and the snowy Adirondack mountains. What to do: Before you go, watch Miracle, the 2004 movie that tells the true story of the USA’s ice hockey team during the 1980 Games, who defeated the Soviets in a surprise victory during their quest for the gold medal. Then visit the Herb Brooks Arena, named after the head coach of the underdog Americans. Ice skate on Mirror Lake; take a gondola ride up and/or ski down Whiteface Mountain; bobsled or luge at the Olympic Sports Complex; and visit the Lake Placid Olympic History Museum.

Best Places to Visit in the World for Vacation or Weekend Trips 2017 - Thrillist. A bibliophile's paradise set in Britain's finest natural scenery On the Wales side of the English border, along the River Wye, sits Hay-on-Wye, a mecca for bibliophiles the world over. 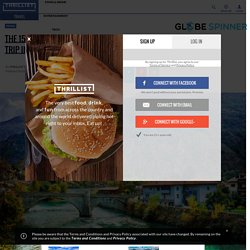 The town of roughly 1,600 book-loving souls inspired Lonesome Dove author Larry McMurtry to collect thousands of antiquarian books in the empty buildings of his rural Texas hometown. Hay-on-Wye's biggest local annual event, the Hay Festival, is one Bill Clinton once described as "Woodstock of the mind. " In turn, the booksellers in this little town celebrate language and knowledge from around the globe -- mysteries, crime dramas, historical romances -- with a fervor that makes the whole place a veritable open-air library.

Not so long ago, more than 60 bookstores thrived here. 10 Destinations You Can Visit for Under 25 Dollars a Day - Thrillist. Cheapest night accommodation: $16Cheapest daily food cost: $3 Kampala is a passed-over African capital for one obvious reason: President Idi Amin Dada, aka Forest Whitaker at his most terrifying. 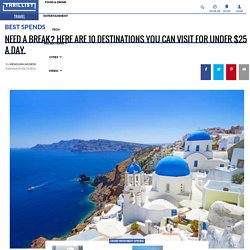 But the hilly city abutting Lake Victoria continues to come into its own, especially culturally. Easy Ways to Make Money While Traveling - Thrillist. Roadtrippers - Maps Built for Travelers. Best Countries to Visit for Backpacking & Young World Travelers - Thrillist. Why to go when you're young: Italy truly has it all. 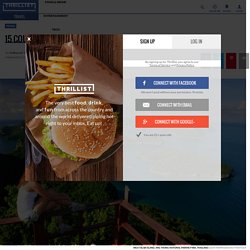 The Great American Bucket List: 50 Things You Must Do in the US Before You Die - Thrillist. America is big. 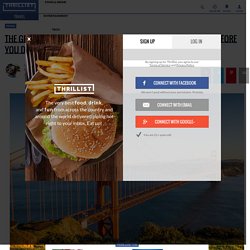 Life is short. And whether you're the kind of traveler who strays off the beaten path or one who hits the biggest damn tourist trap no matter the number of selfie sticks, you have to admit that some places across this great land of ours absolutely MUST be visited before you die. Even if you're not starring in a buddy movie with Morgan Freeman. But where are they? Cheap Flights and Vacation Deals From NYC to Escape for Under $400 - Thrillist. 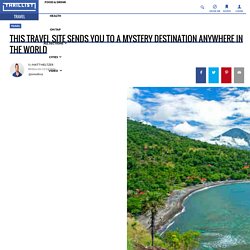 How much? Oh, yes. That. Per Jubel co-founder José Pablo Toscano: "It varies between 10 to 15% of base costs depending on how much effort is put into crafting their experience. We don't rely on hotel commission. What if the trip's a dud? Car rental companies and youth hostels still bring an element of chance, so Jubel can improvise. Best Countries for American Expats to Live Abroad - Thrillist. Why you'd want to live there: Here's the norm in France: 35-hour workweek, 90-minute lunch breaks, wine at pretty much every meal, no open-container laws, unpasteurized cheese, great soccer... living the dream, in short. 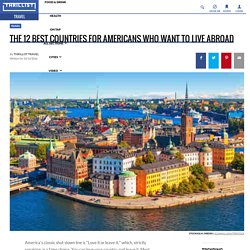 Recent terror attacks have the politics in a jumble, but if you want calm, simply grab a coffee by the Seine to pass all the time you have off. In addition to the short workweek, French employees are given five weeks of paid leave along with 12 federal holidays a year. Prowl the restaurants of Lyon, the museums of Paris, the beaches of Cannes, the vineyards of Champagne. Reasons to Take a Cheap Croatia Vacation to the Dalmatian Coast Now - Thrillist. English-Speaking Countries in Asia, Europe & the Americas - Thrillist. How many people speak English: 70%What it's like as an English speaker: After living in Berlin for over a decade, my German went from being basic to a more advanced basic. 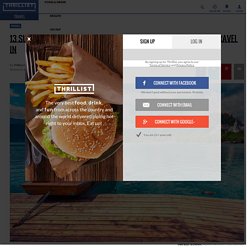 Buying a house, getting a job, starting a company, and making friends, although challenging, proved doable for an Anglophone. This is because most Germans are proud of their English and love using it when possible. Most Underrated Place in California, Florida, Texas, New York, and Every US State. Flickr/Destination Worcester WorcesterWhy you need to go: From the Berkshires to the Cape, Newburyport to Northampton, the Bay State has no shortage of amazing places to visit.

But are any of them really considered underrated anymore? The Best Airbnb in America's Top 25 Getaway Cities. Airbnb Historic Apartment by Forsyth Park Design DistrictRate: $199/nightWhat you get: Entire apartment (accommodates six); two bedrooms; one bathroom Savannah is small (and walkable) enough that it doesn't much matter where you stay, you'll still be in the thick of the action.

All the better though that this newly renovated 2BR garden-level rowhouse that dates back to the 1800s is, well, actually right in the heart of this historic district -- steps from Forsyth Park (did somebody say Saturday farmers market?) Best US Cities to Spend a Weekend - Nashville, Austin, Charleston, Providence. Sometimes you just want to get away and explore a totally new city.

And for that, we've got you covered. This year at Thrillist, we're rolling out massive, comprehensive travel guides to great American cities like NOLA, San Diego, Miami, Austin, and Vegas (spoiler: all on this list). From bars and restaurants, iconic foods, and live tunes, to museums, outdoor activities, and where to stay (not to mention beaches, parks, and ease of getting around), we know what it takes to have a damn good time in a new place.

Which is why we tapped our crack staff of writers and editors across the country to whittle down 300-plus American cities (with populations over 90k) to the absolute 25 best for spending three days. Underrated Southern Towns You Need to Be Spending a Lot More Time In. Best State Parks in America to Visit. Traveling the World: Survival Skills You Need. As we specialize in our careers, the skills we need for world travel tend to lie dormant. The good news is, you can resurrect and sharpen them -- a great way, also, to get to know some forgotten parts of your character. So before you quit that job you do so well, consider polishing the following superpowers. In China and India -- and a bunch of other places, but for sure in China and India -- outsiders are stared at relentlessly by local men, women, children, everyone.

Some people may try to take pictures with or of you, simply because they've never seen anybody with a different skin color. This can feel like a curious, friendly kind of attention; other times it's less pleasant. How to Travel as a Couple: Tips for Traveling Without Fighting. So before you buy anything, just talk about who's going to pay for what.

The easiest thing is to split everything 50/50 to ensure no one gets screwed or gets stuck with paying the astronomically high fee it costs to get into a couples brothel in Berlin. They have that, right? Of course they do. Keep track of your expenses with Venmo, split everything evenly with Splitwise, or just go the old-fashioned route of writing shit down. Best Places to Visit: Underrated Vacations in America. 10 Things You Should Be Able To Say Before You Die. 4 Flares Facebook 0 Twitter 0 Google+ 4 StumbleUpon 0 Pin It Share 0. Summer Vacations That Give You More Bang for Your Buck. Islands You Can Rent on Airbnb. Overlooked Countries You Need to Visit - Thrillist. Best Hikes in the World for Drinking: Mexico, Germany, California, More - Thrillist. The Camino de Santiago (or, for Anglophones, the St.

James Way) is easily among the world's most famous hiking trails. Small American Cities With Amazing Architecture. Best Small US Cities With World-Class Food Scenes. The Top 50 Cities to See in Your Lifetime  Buena Vista Images via Getty Images With our ever-expanding bucket lists, it’s sometimes easy to lose sight of the essentials. The World's Coolest All-Inclusive Resorts. Places to Visit in Europe: Beautiful European Villages. Best Places to Visit in Europe: Alternatives to Popular Cities.