The Top 50 Cities To See In Your Lifetime 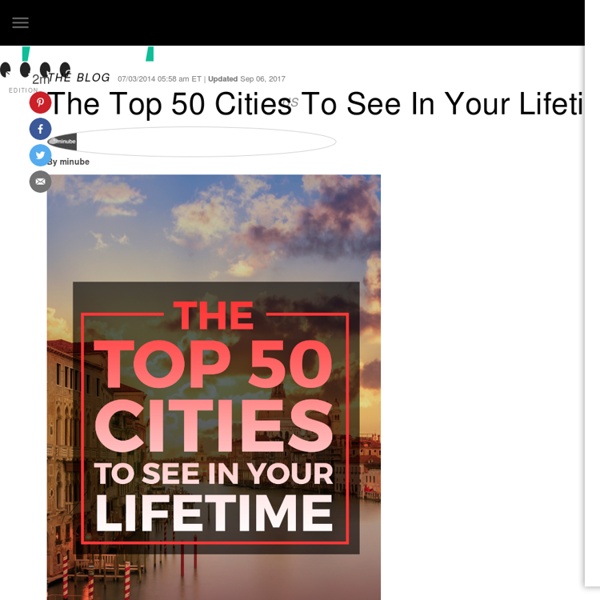 13 Ways To Travel When You Have No Money I recently asked subscribers of my newsletter about the number one thing that holds them back from traveling. The near universal answer? Money The 15 Best Travel Destinations in 2015 With 2014 coming to a close, it’s time to reflect and take a look at the up and coming trending destinations for the new year. Sure, its tempting to want to go back to the old favourites – London, Paris, New York… but what about discovering somewhere new? Somewhere off the beaten path, a travel destination yet to be fully discovered, an underrated city, or an experience only few will ever tick off their bucket lists? Here are the 15 best travel destinations in 2015 – put ’em at the top of your lists and beat the crowds, these destinations are set to boom in 2015 and beyond…

8 Ways to Save on Travel in 2015 Photo Interested in 37 newfangled apps that will save you 0.01 percent on travel for the coming year? I didn’t think so. At some point, you have to stop trying to find every new tool for and shortcut to bargains as they appear and just wait to see which ones stick. By now, you surely know some basics: You probably use meta-search sites to compare airfare and hotel prices; you’ve either tried or consciously avoided “sharing economy” services like Uber; you know that most domestic car rental reservations can be canceled with no penalty should you find a better rate even on the day of the trip. Google's Greatest Travel Hack Will Make Flights MUCH Easier We're not sure why we've never heard about this before -- but as they say, it's better late than never. Unless you're dealing with a late flight, that is. When you're in a hurry to find your personal flight info, it turns out you can turn to Google. Reddit user jasenlee pointed out the trick: If you're logged into your Gmail account and type the words "Flight Status" into Google, the search engine will pull up your personal flight info including your confirmation number, seat, terminal, every email associated with that flight and more. Some users report that Google even tells them the weather in their destination, and when to leave for the airport in order to catch their plane.

7 Ways Traveling Scientifically Changes Your Personality For The Better Traveling is probably one of the only activities that most people can agree they love. I mean, who doesn’t want to discover unfamiliar territory while immersing themselves in a new culture? Who wouldn’t want to explore far-off places, places they wouldn’t get to see under any other circumstances? For those who love traveling, did you know long-term adventures can actually alter your personality? Well, Dr. Julia Zimmermann and Researcher Franz Neyer set out to prove just that in a paper published in the Journal of Personality and Social Psychology.

ITA Matrix Is The Magic Cheap Flights Site You've Never Heard Of When shopping for plane tickets, we won't settle for anything but the cheapest deal. We've got our usual lineup of fare-finding sites to check, yet a nagging feeling always leaves us wondering if we really found the lowest price possible. Is there any way to know for sure? Yes, there is. 50 Unpredictable And Non-Clichéd Places To Travel To In Your 20s There are certain destinations we all dream of traveling to one day: Paris, Rome, Bangkok, Rio de Janeiro, Jerusalem, Tokyo, New York City, Buenos Aires, Beijing, Stockholm. They’re magical cities with cultures and histories that have shaped the dynamic fabric of our globalized world. Travel snobs will tell you these places are so inundated with tourists that you won’t really enjoy visiting them. These individuals have lost sight of how privileged they are to travel in the first place. Regardless of how crowded these places may be, there’s nothing quite like staring up at the ceiling of the Sistine Chapel, emerging from the NYC subway for the first time and staring down at the streets of Paris from the top of the Eiffel Tower. In truth, it’s almost impossible to visit anywhere these days that’s completely untouched by tourism.

A Same-Day Flight Change Is The Cheap Way To Fix Any Travel Woe Even if you've cross-checked your sources, called your airline and waited until the precise optimal date to book your flight, a sense of panic can set in after the final ticket purchase is made. You're locked. You're loaded. How We Traveled The World On $40 A Day, And You Can Too  When we tell people that we traveled to 302 cities in 33 countries across 6 continents for our honeymoon, they generally assume we are millionaires--far from it. We just decided that life was too short, the world was too big, and the value of travel too great to wait until retirement, so we made it happen. We started saving, researching, and honing our travel-hacking skills, and eventually found a way to explore the world for less than $40 per-person/per-day, all in! Here's how: 1.

Where to Go in 2017 - Bloomberg Today’s fast-changing, hyper-globalized world has no shortage of incredible travel opportunities. This year, we’ve done all the legwork for you in rooting out the best, pinpointing the biggest hotel openings and cultural events of the year—along with the places you’ll want to see now, before they change forever. And because it’s not enough to figure out where to go, we’re also helping you decide when to plan each trip, according to hotel price data from Google and insights from our preferred destination specialists across the globe. 10 Secrets The Airlines Don't Want You To Know  Once you’ve experienced a $200 price spike in the middle of your ticket search, your fourth 45-minute flight delay of the day, or your bag going MIA in Miami, you can’t help but think: what are these airlines hiding from me? It turns out, A LOT. Sure, some of it’s coincidence, and you get an $8 voucher for an airport breakfast. But that overpriced breakfast is not an adequate salve — and in fact, you’ve got a right to more than that. Here are 10 secrets airlines don’t want you to know. Credit: Flickr/401(K) 2012

6 Google Flights Tricks That Are Better Than Any Travel Agent Latitudestock - TTL via Getty Images Chances are you're familiar with Google Flights. The flight search engine does everything you assume it would, like locate flights based on your ideal outbound time, inbound time and number of stops. After all, it's the same technology that powers both KAYAK and Orbitz. The site also includes a whole host of features that aren't so easy to imagine, probably because they're so unimaginably amazing. In some cases, this online tool can beat out any human travel agent. 8 Travel Apps That Work Better Than A Guidebook  Skip pricey bus or walking tours on your next trip and instead download these apps, which offer historical insight and cool bits of trivia about areas around the world. Bonus: you won't have to lug around a guidebook. Walking tours are a great way to learn about an area. Unfortunately, guided tours are often expensive and require that you stick with the group and your guide, with little to no time to do your own exploring. But some apps are looking to replace those guides, giving you the ability to take a tour at your own pace for just a few dollars. Here are eight worth checking out.