Norwegian Opening of Parliament 2019. Announcement on the Ceremonies of the Accession to the Throne of His Majesty the Emperor. Between Tuesday, October 22 to Thursday, October 31 the following ceremonies will be held. 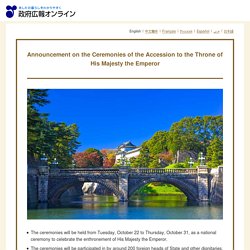 A banquet hosted by the Prime Minister and his spouse will also be held. Ceremony of the Enthronement of His Majesty the Emperor at the Seiden (State Hall) It is a ceremony in which the enthronement is officially proclaimed and the representatives from home and abroad express their felicitations. It will take place in the Imperial Court on Tuesday, October 22. Announcement on the Ceremonies of the Accession to the Throne of His Majesty the Emperor. Royal Musings: To Be Royal or Not to Be Royal ... that is the question. I am sure everyone knows that the Duchess of Sussex is expecting a baby in the spring. 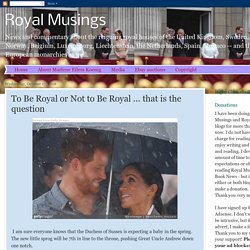 The new little sprog will be 7th in line to the throne, pushing Great Uncle Andrew down one notch. There have been discussions on both sides of the Pond about how the couple's children will be styled. Will the child be royal or will he or she be styled as a child of a duke. It is a conundrum that will be answered before the Duchess gives birth. Reporters React to Prince Harry & Meghan Markle’s Letter to the Press and Their Lawsuit. Wow. 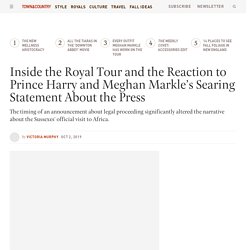 What a statement. What a way to end a 10-day milestone royal tour. For the journalists in Johannesburg covering the final leg of the Sussexes' trip to Africa, the subtle ping of a message dropping totally belied the scale of the news that was to follow. Just when we thought that we were on the home stretch, ahead of the final day of the trip (confession, I was ready for bed), word that the couple were launching legal action against the Mail on Sunday kick-started a whole new cycle of coverage. Harry’s 565 words read in some ways like the email many of us draft in haste but never send. Prince Harry: ‘I lost my mother and now I watch my wife falling victim to the same powerful forces’ LONDON — Meghan Markle, the wife of Britain’s Prince Harry, has started legal proceedings against the Mail on Sunday newspaper over the publication of a private letter that her lawyers said was “unlawful.” 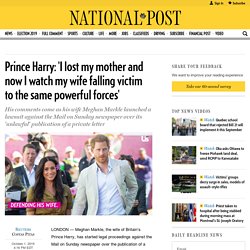 In a lengthy, emotional statement, Prince Harry said on Tuesday that the couple had taken legal action in response to what he called “bullying” by some sections of the British press. “Though this action may not be the safe one, it is the right one,” he said. “My deepest fear is history repeating itself. I’ve seen what happens when someone I love is commoditised to the point that they are no longer treated or seen as a real person.

I lost my mother and now I watch my wife falling victim to the same powerful forces.” The day the Queen Mother died and the newsreader who announced the story – Royal Central. By H.M. 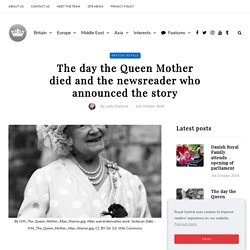 _The_Queen_Mother_Allan_Warren.jpg: Allan warrenderivative work: Sodacan (talk) - H.M. _The_Queen_Mother_Allan_Warren.jpg, CC BY-SA 3.0, Wiki Commons Peter Sissons, who worked on some of the biggest royal stories of the 20th and 21st centuries in his role as a leading newscaster, has died. Danish Royal Family attends opening of parliament – Royal Central. Yesterday, the Danish Royal Family attended the official opening of the Danish Parliament at Christiansborg Palace in Copenhagen. 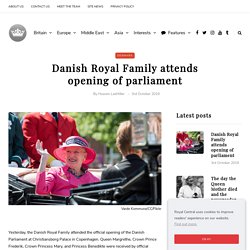 Queen Margrethe, Crown Prince Frederik, Crown Princess Mary, and Princess Benedikte were received by official members of the Parliament at noon when the first session of the parliamentary year began. The opening of the Parliament takes place each year on the first Tuesday of October. This year, Prince Joachim and Princess Marie didn’t attend the ceremony. Indeed, the couple is now living in Paris, France as Prince Joachim is currently undertaking a year-long high-level military training at the Centre des Hautes Etudes Militaires and at the Institut des Hautes Etudes de Defense Nationale. The day before, Prince Joachim and Princess Marie represented Queen Margrethe at the state funeral of former French President Jacques Chirac in Paris. Will Princess Beatrice Change Her Royal Title?

Dave Benett/Getty Images Now that Princess Beatrice is engaged to her beau, Edoardo Mapelli Mozzi, there’s only one question on our mind: Will she change her royal title after the wedding? 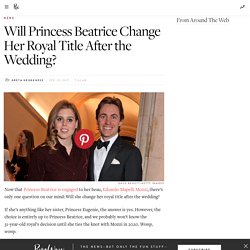 If she’s anything like her sister, Princess Eugenie, the answer is yes. However, the choice is entirely up to Princess Beatrice, and we probably won’t know the 31-year-old royal’s decision until she ties the knot with Mozzi in 2020. Womp, womp. You see, it all comes down to whether or not Princess Beatrice wants to include her soon-to-be husband in her royal title.

Prince Harry Is Taking Over This Instagram Account. CAMFED - Campaign for Female Education sur Twitter : "WOW! What an incredible reunion between CAMFED Alumnae (#CAMA) and Prince Harry today in Malawi! We are so thrilled to have the opportunity to update him on CAMA’s achievements since we last met last y. HRH, President of QCT, has arrived here in Malawi! What a welcome from #CAMA! #Royalvisitmalawi #sussexroyaltour… All Saints Church, Harewood. HRH Princess Mary and the Lascelles family are buried, near to the altar in the family vault. The church has many memorials to the Earl's and the Lascelles family.… Queen Frederica's Diamond Clip Brooches. Prince Mateen of Brunei. Prisma sur Twitter : "On September 28th, Emperor Naruhito and Empress Masako attended the 74th National Sports Festival's opening ceremony in Hitachinaka, Ibaraki Prefecture. Emperor Naruhito's speech included sympathies & wishes for speedy recovery from.

Victoria Murphy sur Twitter : "Prince Harry today: “It has been an honour to retrace my mother’s steps today. I lost her twenty-two years ago, but the memory of her is with me daily and her legacy lives on which is why I am so happy to name the centre - “ Meghan Markle clutches Archie as she prepares to fly to Johannesburg for next leg of royal tour. The Duchess of Sussex and baby Archie have left Cape Town and headed to the next stop on their 10-day royal tour, while Prince Harry has jetted off to Malawi. 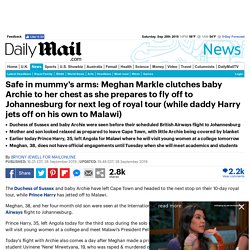 Meghan, 38, and her four-month old son were seen at the International Airport before their scheduled British Airways flight to Johannesburg. Prince Harry, 35, left Angola today for the third stop during the solo section of the royal tour, where tomorrow he will visit young women at a college and meet Malawi's President Peter Mutharika. Today's flight with Archie also comes a day after Meghan made a private visit to a memorial for South African student Uyinene 'Nene' Mrwetyana, 19, who was raped & murdered on August 24. The Duchess of Sussex and baby Archie, pictured together at Cape Town International Airport today before their scheduled British Airways flight, have travelled to Johannesburg for the next part of the 10-day royal tour Archie was last seen on Wednesday during tea with Archbishop Desmond Tutu in Cape Town. 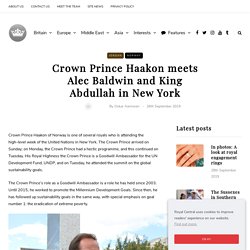 Princess Beatrice declared she was 'so excited' and 'can't wait to be married' as her engagement to her millionaire property tycoon boyfriend was announced yesterday. 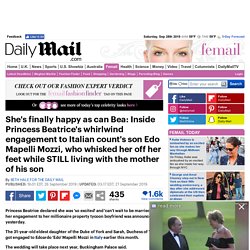 The 31-year-old eldest daughter of the Duke of York and Sarah, Duchess of York, got engaged to Edoardo 'Edo' Mapelli Mozzi in Italy earlier this month. The wedding will take place next year, Buckingham Palace said. Their official colour engagement portraits, showing the couple gazing into each other's eyes, were taken by Beatrice's sister Princess Eugenie. Beatrice and Edo endured a rocky start to their romance after news of their relationship apparently came as a surprise to his ex-fiancee Dara Huang, mother of his two-year-old son Christopher Woolf. Yesterday Ms Huang said: 'I wish the best for Edo and Beatrice and look forward to uniting our families.' Here, we tell the inside story of the latest royal romance . . . Let your style bloom in Princess Beatrice's Zimmermann dress Congratulation to Princess Beatrice!

One of the most fun things about running a royal jewelry website is definitely the way my readers share their royal jewel experiences with me. I'm always so honored when readers contact me and offer to share photos they've taken at various jewelry exhibitions, and I was thrilled when Annika reached out recently to share photos she took on a recent visit to Rosenborg Castle in Denmark. The treasures of Rosenborg are way to numerous to include comprehensively here, so I'll hit some of the highlights.

This display includes a double-stranded pearl necklace that belonged to Caroline Mathilda, the tragic queen consort of King Christian VII. The diamond earrings here also belonged to her. This jeweled hair ornament features a diamond crescent and pearl feathers. One of the most fun things about running a royal jewelry website is definitely the way my readers share their royal jewel experiences with me. Facebook. #katemiddleton #princewilliam #duchessofcambridge #princegeorge #princesscharlotte…” Royal Family on Instagram: “Princess Anne’s engagement to Mark Phillips - then Lieutenant in the Queen’s Dragoon Guards, was announced on 29 May 1973. . . . . . . .…”

The Duke and Duchess of Sussex are due to embark on their royal tour of Africa this autumn, where they are expected to undertake around 35 engagements from Monday 23 September to Wednesday 2 October. The couple, who are travelling with baby Archie, will spend the first three days in Cape Town, South Africa before Harry travels to Botswana alone for a one-day private working visit. The Duke will then resume the tour, which is being carried out at the request of the Foreign and Commonwealth Office, in Angola. Harry will later spend two days in Dirico, Huambo and Luanda before travelling to Malawi where he will be reunited with his wife Meghan and their four-month-old son.

The couple will end their tour in Johannesburg, South Africa. But the royal couple won't be travelling alone as they'll be bringing their dream team along for the trip to make sure everything runs smoothly – and HELLO! Meghan and interim private secretary Samatha Cohen Assistant private secretary Heather Wong. Meghan Markle and Prince Harry announce details of their Africa tour with baby Archie. Sept. 22 is just over two weeks away, and in next to no time we’ll see Prince Harry, Duchess Meghan and Archie Harrison on their royal tour!

We’ve all been anxious to hear when the family of three will head to the continent, along with where they’ll be travelling and now Buckingham Palace have satisfied royal watchers’ curiousity by releasing their itinerary! Meghan, Harry and Archie will set off for South Africa on Sept. 22, and will arrive the next day. They’ll spend three days in Cape Town, South Africa, and Harry will head to Botswana for Sept. 26. From Sept. 27 to 28, he’ll be in Angola, and will spend three days in Malawi from Sept. 28 to 30. He will split Oct. 1 in Malawi and South Africa, where he will rejoin Meghan and Archie in Johannesburg before the tour ends Oct. 2. The tour will also incorporate tree planting, conservation, and visits to organizations that work in fields such as empowerment for women and girls, HIV/AIDS and international peacekeeping. Kate Middleton's cute comment to Princess Charlotte as she walks into school on first day.

It was an exciting day for the Cambridge family as Princess Charlotte joined her big brother at school for the first time. Prince William and Kate dropped both kids off at Thomas's Battersea just after 8am this morning, and they both looked very proud of their little girl. The Duchess had some encouraging words for Charlotte as they walked through the school doors after being greeted by their teacher, and they were about Prince George. 403 Forbidden. 403 Forbidden.