The true story behind Kate Middleton's new glow and edgy fashion sense. There is definitely a brand-new glow surrounding the Duchess of Cambridge. 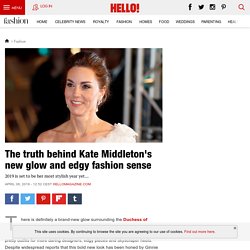 Over the past few months, the mother-of-three has won praise from fashionistas after trading in her trusty nude court shoes and pretty outfits for more daring designers, edgy pieces and skyscraper heels. Despite widespread reports that this bold new look has been honed by Ginnie Chadwyck-Healey, HELLO! Can reveal that, while the former Vogue staffer has given occasional advice, Kate's much-admired wardrobe continues to be the work of her long-time PA and stylist, Natasha Archer.

Natasha is on maternity leave following the birth of son Theo in December, but she planned outfits for the Duchess ahead of her time away and works behind the scenes as needed. "Natasha has been meticulously organised in her work, styling the Duchess despite her pregnancy and maternity leave," a royal source told HELLO! PA and stylist, Natasha Archer, continues to style Kate. Royal secret: Prince William's been working on Her Majesty's Secret Service for three weeks. He is used to carrying out his duties in public but for the past three weeks, the Duke of Cambridge has been quietly at work on a top-secret assignment. 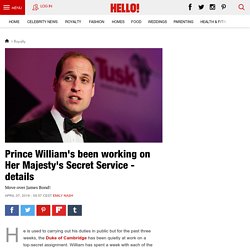 William has spent a week with each of the three branches of the UK’s Intelligence Services – MI5, MI6 and GCHQ – working full-time alongside operatives and agents to get an understanding for their crucial roles. Speaking at the end of the placement, the Duke said: "Spending time inside our security and intelligence agencies, understanding more about the vital contribution they make to our national security, was a truly humbling experience. These agencies are full of people from everyday backgrounds doing the most extraordinary work to keep us safe. They work in secret, often not even able to tell their family and friends about the work they do or the stresses they face.

Meghan Markle’s natural birth plans revealed - details. The Duchess of Sussex will be giving birth in the next few weeks, and as we eagerly await the exciting arrival of Prince Harry and Meghan's first child, there has been a lot of speculation about where she will deliver and who will be in the delivery room with her. 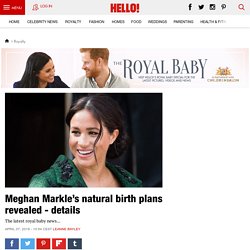 The Mail on Sunday has reported that Meghan is opting for as natural a birth as possible and will not be enlisting the help of the Royal Household gynaecologists. In fact, HELLO! Understands that while the Duchess is hoping to have as little medical intervention as possible when she gives birth to her first child, the Queen’s medics will be on hand should their assistance be needed.

Royals teasing each other - Kate Middleton, Meghan Markle's funniest one-liners. Despite following protocol and acting with respect and dignity at all times, the royals are also known for having a sharp sense of humour - especially when it comes to teasing each other. 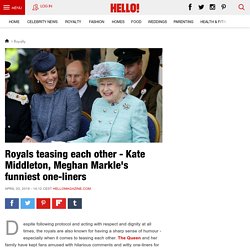 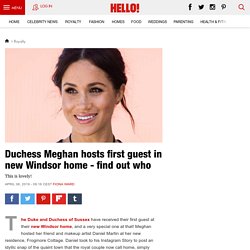 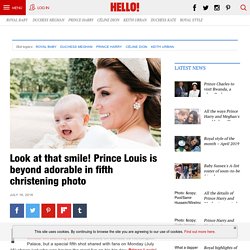 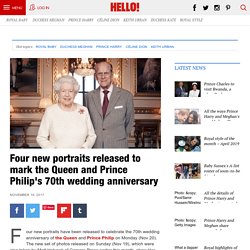 The new set of photos released on Sunday (Nov 19), which were also taken by Matt Holyoak of Camera Press earlier this month, show Her Majesty, 91, and the Duke of Edinburgh, 96, posing against a platinum-textured background. The monarch looks lovely in a cream day dress by Angela Kelly and her Scarab brooch pinned to her chest; the brooch, in yellow gold, carved ruby and diamond, was a personal gift from the Duke to the Queen in 1966. On Saturday (Nov 18), the palace released a single portrait of the couple posing in the White Drawing Room at Windsor Castle. Prince George's christening takes place at St James' Palace in the Chapel Royal. 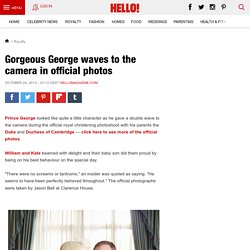 William and Kate beamed with delight and their baby son did them proud by being on his best behaviour on the special day. "There were no screams or tantrums," an insider was quoted as saying. "He seems to have been perfectly behaved throughout. " The official photographs were taken by Jason Bell at Clarence House. When the Queen greeted her great-grandchild, he also seemed to give her a wave, although a sleight of hand by William may have been responsible for this greeting. William has previously said that George, whose christening took place on his 94th day in the world, is "pretty loud". Video: Spirited Prince George steals the show at royal christening. At only two-months old, Princess Charlotte of Cambridge has been lavished with more attention than most people receive in a lifetime. 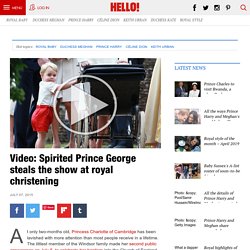 The littlest member of the Windsor family made her second public appearance on July 5, to celebrate her baptism into the Church of England - but not without a little jig from big brotherPrince George. Here, we’ve pulled together some of the most beautiful and adorable moments shared on the special day between proud parents the Duke and Duchess of Cambridge and their children, calm baby Charlotte and spritely toddler George. As the sun shone on the Queen’s Sandringham estate in Norfolk, hundreds of well-wishers lined the street leading up to St. Mary Magdalene Church to catch a glimpse of the Royal Family as they made their way into the service. Princess Charlotte stars in beautiful christening photos taken by Mario Testino. 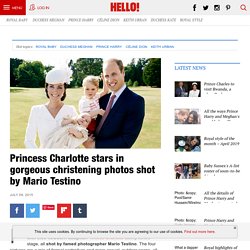 If there’s one thing the royal children have, it’s a variety of interests – and likely a few things they can teach the future royal baby! Sarah Ferguson and Prince Andrew's incredibly unique relationship - a closer look. Sarah Ferguson accompanied ex husband Prince Andrew to the Grand Prix while on an official trip in Bahrain last Sunday. The pair were official guests of their host the Bahrain Crown Prince, along with their daughter Princess Beatrice and her boyfriend Edoardo Mapelli Mozzi. For Sarah and Andrew, it was the first time they had officially travelled overseas together in 25 years. Fans have always admired how the former couple remain such good friends since divorcing over 22 years ago. The foundation OF their bond is twofold; friendship and family.

Both parents are devoted to their daughters Beatrice and her younger sister Princess Eugenie. We take a closer look inside Sarah and Andrew's unbreakable bond… READ: Princess Beatrice and boyfriend Edoardo Mapelli Mozzi pictured with Sarah Ferguson for the first time. Prince Harry, Meghan Markle's babymoon: Details. Duchess Meghan is officially on maternity leave and her beau Prince Harry has pared down his royal engagements, so the two finally found some time to enjoy a chic babymoon! The Sussexes had a quick, well-deserved reprise from the limelight, and reportedly spent some time at one of Hampshire’s most luxurious hotels, the Georgian-era home known as Heckfield Place.

Harry and Meghan enjoyed a quiet walk through the Redwoods Tree Walk in New Zealand while on royal tour. Photo: © Pool/Samir Hussein/WireImage. Royal grief - Kate Middleton, the Queen and Prince Harry open up about losing a loved one. Prince Harry and Meghan Markle officially move into new home in Windsor. The Duke and Duchess of Sussex have officially left Kensington Palace and have moved into their new home in Windsor, Frogmore Cottage, HELLO! Can confirm. With just days to go before Harry and Meghan welcome their first child, it's certainly a busy period for the royal couple. The 37-year-old Duchess is expected to give birth later this month, although Meghan has previously revealed that she is due at the end of April or the beginning of May.

They will be able to enjoy a quieter life away from the cameras in their new home, while learning to adjust to parenthood. An exterior view of Frogmore Cottage Royal chef Darren McGrady, who worked for Princess Diana until her death, used to live near Frogmore Cottage in staff quarters and previously told HELLO! The Real Story Behind Kate And Meghan’s Royal Relationship. Royal Caribbean Tour Recap: The Prince of Wales and the Duchess of Cornwall end tour in the Cayman Islands.

@ClarenceHouse/Twitter. The Windsor Titles: The Duke of Gloucester. Duke and Duchess of Sussex surprise favourite Aussie, Daphne, on her 99th birthday. Why Prince Harry and Meghan Markle Are Moving to Windsor. Prince Harry and Meghan Markle will have this ONE item in their new home. The Duke and Duchess of Sussex are just weeks away from moving into their new home together in Windsor, and there's one thing they're bound to receive as a moving in gift – which would also serve as a sweet memento from their royal wedding.

The Duke of York, who is a keen photographer, has already tried his hand at tweeting and taking selfies, and this week uploaded the behind-the-scenes picture onto his social media page, which is usually reserved for official announcements. The Duchess of Cornwall has revealed her dream gift - and Prince Charles might find it hard to get. Christmas shopping is about to get a little tricky for Prince Charles, after his wife the Duchess of Cornwall revealed the gift she'd like most - and it's something a bit more special than a scented candle. Prince Andrew shares new photo from inside Buckingham Palace. All the times Meghan Markle, Princess Eugenie and the royal family shared a glimpse at home life. Inside Prince William and Kate Middleton's home at Kensington Palace. Prince Harry and Meghan Markle's new house: Everything you need to know about Frogmore Cottage.

Meghan & Harry □ supporters on Instagram: “WOW! Look at this! The precious moment Baby Sussex kicked Meghan’s lungs out of her □ He/she really wants to come out to meet us people! No…” Login. Login. Login. Login. Why Kate Middleton’s Christmas with George, Charlotte and Louis will break with her family tradition. The royals including the Queen and Sophie Wessex head to Sunday service before we next see them on Christmas Day. Royal family Christmas cards from around the world in 2018 - HELLO! Canada. Meghan Markle's exciting 2019: Baby, birthdays, patronages and more - HELLO! Canada. Royal Nicknames: See which pet names the British royals use for each other - HELLO! Canada. Princess Eugenie congratulated following new announcement. Kate Middleton, Meghan Markle and more royals arriving for Queen's pre-Christmas lunch: Photos - HELLO! Canada.

@buckinghampalaceshop on Instagram: “From 26 October 2018 to 6 January 2019 the outfits worn by The Duke and Duchess of Sussex for their wedding at St George's Chapel, will go…” @buckinghampalaceshop on Instagram: “This second photograph of The Prince of Wales and his family has also been released by @clarencehouse to celebrate HRH’s 70th birthday. The…” Kate Middleton’s Best Looks Ever. Prince George and Cousin Savannah Had a Cheeky Laugh at Princess Eugenie's Wedding. Thesun.co. Prince Harry and Meghan Markle to set up home at Nottingham Cottage at Kensington Palace.

Thesun.co. Harry set to split from big brother Wills as he and Meghan move away from Kensington to set up home in Windsor. Emily Andrews sur Twitter : "Exclusive: Harry & Meghan are moving out of Kensington Palace next year. They’ve been given a new house by the Queen and it will be their official residence. It’s currently undergoing a large refurbishment to turn it back from. Prince Harry and Meghan Markle's New Home Sounds Like a Total Dream. Why Prince Philip Reportedly Encouraged Prince Charles’ Affair.

How Kate Middleton Put Those Rumors of a Feud With Meghan to Bed Once and for All. Why Prince Philip Reportedly Encouraged Prince Charles’ Affair. See Meghan Markle and Prince Harry's New Home, Frogmore Cottage. Prince Harry ‘Feels Very Imprisoned at Kensington Palace’ The Cambridges on Instagram: “#throwback Baby George & his parents! □□ Wishing you a good start of the week□ - #RoyalFamily #Royals #PrinceWilliam #KateMiddleton…” The Cutest Pictures Of The Royal Children. All the Pictures You Have to See from Pippa Middleton's Wedding. The Best Photos From Princess Eugenie's Wedding.