Image of the Day. A crowning start ~ Stunning Florida #sunrise on 5th September 2019 ~ Thanks to @SpaceCoastSkies #crepuscular #StormHour… Dorian might make landfall in the Carolinas after moving along Florida coast. Landfall in Charleston, Wilmington or the Outer Banks is not out of the question, CNN meteorologist Judson Jones said. 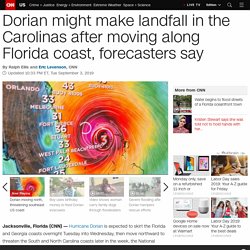 "The hurricane is forecast to track dangerously close to the Carolinas," Jones said. "Any wobble to the West and the chances of landfall in South and North Carolina is more likely. Currently, a few of the forecast models have shown a slight westward trend, which is something meteorologists will continue to watch closely. " Officials in the Carolinas are clearly worried about the Category 2 storm, which ravaged the Bahamas and is packing sustained winds of 110 mph. "There is a real triple threat when high tides and heavy rains and storm surge happens at the same time," Charleston Mayor John Tecklenberg said Tuesday night on CNN. The National Weather Service in Wilmington upgraded its storm surge and hurricane watches to warnings on Wednesday. "Please heed any evacuation orders from local emergency officials where you live," Cooper said. Boy uses birthday money to feed Hurricane Dorian evacuees. 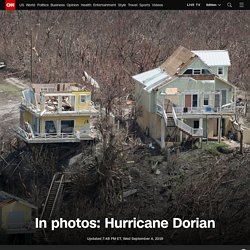 Scott Olson/Getty Images Updated 7:48 PM ET, Wed September 4, 2019 Hurricane Dorian battered the Bahamas when it took a slow pass over the islands beginning early Sunday, obliterating houses and knocking out power. When it made landfall on Sunday afternoon, it was a Category 5 hurricane with winds of 180 mph. It's the strongest storm to ever hit the Bahamas. The hurricane had already lashed the Virgin Islands, toppling trees and power lines and leading authorities to declare a state of emergency. Dorian is moving slowly toward the US mainland, and forecasts show a range of possible landfall sites. 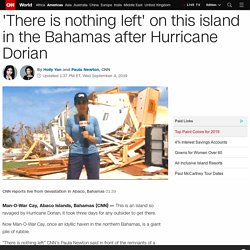 "There is nothing left" CNN's Paula Newton said in front of the remnants of a building. "We're talking about damage (to) 90% to almost 100% of everything that is here. " Man-O-War is part of the Abaco Islands, where at least 20 people were critically injured by the hurricane, Bahamian officials said. At least seven Bahamians have been killed by Dorian, and the prime minister expects the death toll to rise. Search crews weren't able to reach hard-hit areas for days. Even now, going door-to-door to look for survivors isn't an option because in many places, there are no more doors. Paula Newton reported from Man-O-War Cay, and Holly Yan reported and wrote from Atlanta. Now Man-O-War Cay, once an idyllic haven in the northern Bahamas, is a giant pile of rubble. In photos: Hurricane Dorian. A man bought 100 generators to help the Bahamas. They're being delivered by boat. 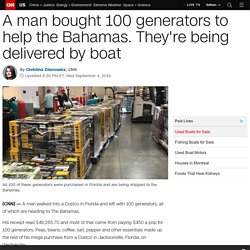 Peas, beans, coffee, salt, pepper and other essentials made up the rest of his mega purchase from a Costco in Jacksonville, Florida, on Wednesday. All of it is going to those in need on the hard-hit islands of Grand Bahama and Abaco, he said. "About 100 generators and a truck load of food and chainsaws are all going over by boat on Thursday to Marsh Harbour in The Bahamas. It's terrible and I'm sure you've seen the photos," a farmer from Jacksonville told CNN on Wednesday. The man wishes not to be named. "It's important that we help each other out. The world knows about this man's good deed because someone else was at that Costco buying a generator, as his was going out. "I had to go up there to him and say, 'Thank you for doing this,'" Alec Sprague said. Live updates: Hurricane Dorian threatens the US after devastating the Bahamas. Tides are expected to continue to increase overnight and could cause major tidal flooding in Charleston, South Carolina, city officials said Wednesday. 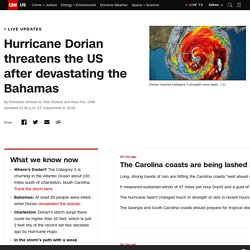 City emergency management officials said if conditions deteriorate significantly, rescue operations may be temporarily suspended for the safety of first responders. Motorists are encouraged to avoid the peninsula until the storm passes, officials said. Charleston Mayor John Tecklenburg told CNN the city has had training with major storms over the past four years and it is prepared for Dorian. “That being said, it is starting to whip up.

We’re expecting real high tides tonight," he said. “Our biggest concern is that combination of heavy rain and high tide and storm surge all at the same time, which can bring water right into our city," Tecklenburg said. Charleston County is under a mandatory evacuation order. 190904092432 desktop dorian satellite loop 20190904 9a.