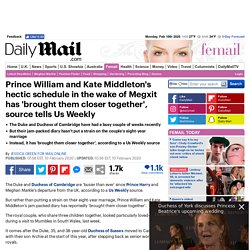 Exploring Royal Scotland: The Royal Yacht Britannia – Royal Central. In honour of The Queen’s Holyrood Week, we’re taking a look at royal history in and around Edinburgh. 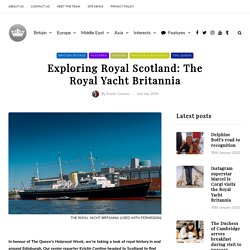 Our senior reporter Kristin Contino headed to Scotland to find out more about some favourite royal spots. “Britannia is the one place where I can truly relax,” The Queen once said, and when you tour the ship for yourself, you can understand exactly why. The decommissioned yacht, now permanently docked in Edinburgh’s Leigh neighbourhood, is one of Scotland’s most popular tourist attractions, but for 44 years, it was the floating palace of Britain’s royal family. BREAKING: King Albert of Belgium concedes he has an illegitimate daughter – Royal Central. By Voka Kamer van Koophandel Limburg CC BY 2.0 via Wikimedia Commons The former King of Belgium, Albert II, has publicly conceded that Delphine Boël is his illegitimate daughter. 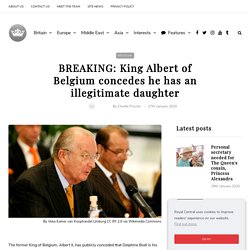 Queen Elizabeth Appoints Prince William to New Position. Kate Middleton given stern telling off by Camilla just days after Harry scolded Meghan. Camilla appeared to tell the chatty duo to pay attention and turn around to the face the front at the ceremony. 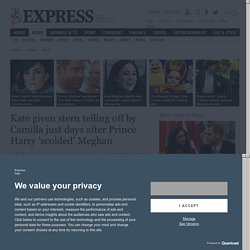 After Argentine-born Maxima was tapped in the shoulder, she and Kate looked straight ahead for the procession. Order of the Garter is a service founded by Edward III in 1348 recognising contributions to public service. The Queen chooses recipients personally without consulting ministers and a second order “Stranger Knight” was introduced in 1813 when George III was on the throne and is bestowed upon foreign royals. Queen Maxima was in attendance as husband King Willem-Alexander was bestowed the title, King Felipe VI of Spain was also there to receive the title. Queen shock: How THIS royal is her least favourite grandchild - it’s not who you expect. The Queen and the young royals tend to rank well in popularity polls. 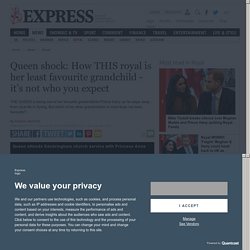 For instance, in a recent Express.co.uk poll, the Queen was voted the most popular member of the Royal Family, while Prince Charles and Camilla, Duchess of Camilla were named the least popular. But which members of the Queen’s family does she like the most? Queen Elizabeth II has reigned for 68 years this year. Throughout that time, she has seen her family grow enormously welcoming four children of her own and subsequently eight grandchildren and eight grandchildren.

Kate Middleton given stern telling off by Camilla just days after Harry scolded Meghan. The Queen's beloved Scottish residence Balmoral launches safari tours. The Queen's Scottish residence of Balmoral is said to be one of her favourite places in the entire world, and now visitors can get the opportunity to discover exactly what it is the royals love so much about the country estate. 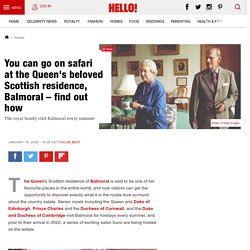 Senior royals including the Queen and Duke of Edinburgh, Prince Charles and the Duchess of Cornwall, and the Duke and Duchess of Cambridge visit Balmoral for holidays every summer, and prior to their arrival in 2020, a series of exciting safari tours are being hosted on the estate. WATCH: Take a look inside the royal residences Promising to show the best of the Balmoral estate, the tours run between April and August, and take a maximum of six guests on a Land Rover safari starting in front of the historic castle before travelling through the estate farm and into the old Caledonian Pine Forest. The three-hour trip continues with a drive high up the Lochnager mountain, before heading back down via the monuments and historical buildings of Easter Balmoral.

The royals' most extravagant birthday parties from Prince Harry to Princess Eugenie. The Duchess of Cambridge celebrated her 38th birthday this month and the next royal to celebrate being another year older will be the Countess of Wessex, who turns 55 on Monday. 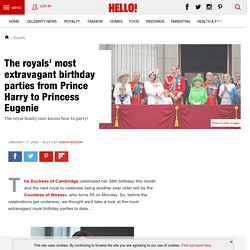 So, before the celebrations get underway, we thought we'd take a look at the most extravagant royal birthday parties to date… Princess Olympia's 21st birthday Princess Olympia's 21st birthday was certainly an extravagant affair. With a revolution theme and a guest list jam-packed with royals, it's said that the event had a Marie Antoinette feeling – we'd expect no less from the Crown Prince and Princess of Greece's daughter! In fact, the princess shared her birthday with her father, who turned 50. Four gowns Kate could rewear at the BAFTAs – Royal Central. Picture by i-Images / Pool In an effort to lessen their carbon footprint and promote sustainability, the British Academy of Film and Television Arts (BAFTA) has asked attendees of their BAFTA Film Awards to rewear an outfit they’ve worn in the past or to choose another sustainable option. 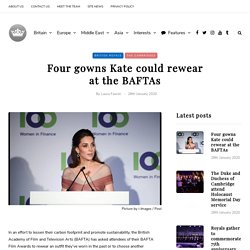 The Duke and Duchess of Cambridge will attend the awards as the Duke is president of BAFTA. The commitment to sustainability is a great fit for the Duke who just weeks ago announced a new initiative of The Royal Foundation called The Earthshot Prize, which will recognise “visionaries” who are helping to solve “Earth’s greatest environmental problems”. The bells at Westminster Abbey ring out to mark the Duchess of Cambridge’s 38th birthday – Royal Central.

The bells at Westminster Abbey tolled on Thursday afternoon to celebrate the Duchess of Cambridge turning 38-years-old. 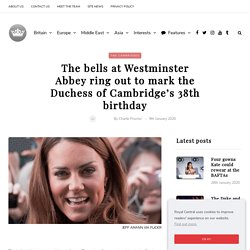 Westminster Abbey often chimes it’s bells on big royal occasions, most recently in November to celebrate the 72nd wedding anniversary of The Queen and the Duke of Edinburgh. The fact that Catherine has now been recognised by the bells at Westminster Abbey shows her increasingly important role within the British Royal Family. To mark the Duchess turning 38-years-old, Buckingham Palace shared a trio of photos of Catherine with the Queen.

Kensington Palace Releases New Photo for Kate Middleton’s 38th Birthday. It’s been quite the week for the royal family. 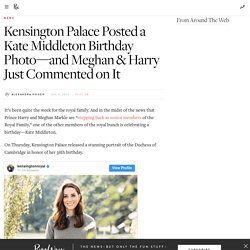 And in the midst of the news that Prince Harry and Meghan Markle are “stepping back as senior members of the Royal Family,” one of the other members of the royal bunch is celebrating a birthday—Kate Middleton. On Thursday, Kensington Palace released a stunning portrait of the Duchess of Cambridge in honor of her 38th birthday. "Thank you everyone for all your lovely messages on The Duchess of Cambridge's birthday! " the caption read. Kate Middleton and Prince William host glamorous reception for UK-Africa Investment Summit. Kensington Palace (@kensingtonroyal) @dianacambridgesgallery on Instagram: “Wishing you all an amazing Sunday! I hope your Sunday will be a fun one, so you feel energized for your Monday activity. It's…”

Some of Prince George's birthday photographs through out the years. Can't wait to see what his sixth birthday photograph is going to be. Any guess? My guess would be three photographs of him at Kensington Palace/Anmer Hall taken by his mother, The Duchess of Cambridge Indonesian: Beberapa foto ulang tahun Pangeran George. Aku gak sabar menanti bagaimana foto ulang tahun ke enam nya nanti. Tebakan ku bakal ada tiga foto diambil di Istana Kensington/ Anmer Hall oleh mama nya, The Duchess of Cambridge. @dianacambridgesgallery on Instagram: “This will remain my forever favourite photograph of the family. Prince Louis looked happy and comfortable in the arms of his grandfather…”

On a statement released by Kensington Palace, it was said that: The Duke and Prince Harry are grateful for the many flowers, letters, and messages they have received about their mother and wanted to say thankyou for those who made the journey to Kensington Palace. GALA magazine on Instagram: “Här hedrar prins Harry och prins William prinsessan Diana - se bilder på galamagazine.se □Stella Pictures #prinswilliam #prinsharry…”

VRT NWS on Instagram: “Prinsen William en Harry herdenken hun overleden moeder.” Royal Family: Charlotte and George join Sandringham service. Media playback is unsupported on your device Prince George and Princess Charlotte mingled with the crowds as they attended the Royal Family's Christmas Day church service for the first time. Prince Philip, who was released from hospital on Tuesday, did not attend. A large crowd gathered to greet the Queen and family members as they attended the service at St Mary Magdalene Church in Sandringham. Prince Andrew, who stepped back from royal duties last month, kept a low profile at the event.

Prince George Will Star in the Queen's Annual Program. Kate Middleton Reveals that William Used to Cook for Her at University. Prince Charles & Camilla Parker Bowles First Tour of 2020. Chris Jackson/Getty Images. Prince Charles & Camilla Parker-Bowles Features a Shot From Their Royal Tour of Cuba. (24) Queen Beatrix's announcement of abdication (English subtitles) Pictures Of Prince George And Princess Charlotte At Royal Family Christmas Service Are Delightful. Prince Harry, Meghan Markle Spending Holidays In Canada. Prince Harry and Meghan Markle have finally revealed where they are spending their holiday amid their break from royal duties. A spokesperson for the couple confirmed Friday, according to multiple news outlets and royals reporter Omid Scobie, that they are spending time in Canada, which is where the Duchess of Sussex lived when filming her show “Suits.” HuffPost has reached out for further comment. “The decision to base themselves in Canada reflects the importance of this Commonwealth country to them both,” the statement said.

The only daughter of the then Crown Prince Vajiralongkorn and his consort and later wife, Sujarinee Vivacharawongse, she has four elder brothers, as well as an elder half-sister, Princess Bajrakitiyabha, and a younger half-brother. Following her parents’ divorce in 1996, she moved abroad with her mother and siblings to the United Kingdom, but her father ordered her abduction and return to Thailand. Princess Sirivannavari graduated with a Bachelor of Arts degree from Chulalongkorn University and a Masters in design from École de la chambre syndicale de la couture parisienne.