[Tropical Aquariums] Arowana: The fish that triggered a saga of theft, murder, black markets and international disputes... all because of its resemblance to a dragon : HobbyDrama. Algae-farming fish domesticate tiny shrimp to help run their farms. Humans are experts at domesticating other species and our world would be unrecognizable without it. 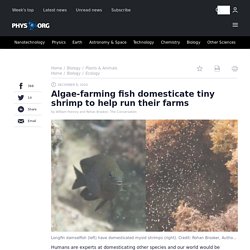 There would be no cities, no supermarkets, and no pets. Domestication is a special kind of cooperative relationship, where one species provides prolonged support in exchange for a predictable resource. While humans have domesticated various plants and animals, these relationships are surprisingly rare in other species. It's true some insects (ants, beetles, and termites among them) domesticate fungi, but few other examples exist outside the insect world.

In our new study, we describe what appears to be first example of a non-human vertebrate domesticating another animal. Farming fish domesticate shrimps On the coral reefs off the coast of Belize, in Central America, longfin damselfish create, manage and feed from algae farms. We found this unusual, as most farming damselfishes chase away anything that ventures near their farm. Tadpoles: The Big Little Migration. Underwater Cave Exploration T-T. Untitled. Untitled. Psychedelic Fishes from the World’s First Natural History Encyclopedia of Marine Creatures Illustrated in Color. “Who has known the ocean? 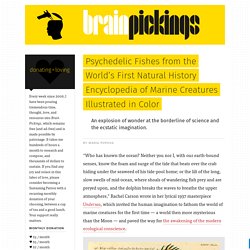 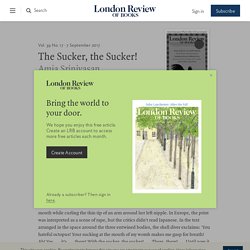 A second, smaller octopus inserts its beak into the woman’s mouth while curling the thin tip of an arm around her left nipple. The Jellyfish Problem. Detail from Kunstformen der Nature © Bridgeman Images. 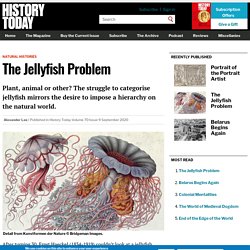 Unknown Phylum. Any suggestions? The following has been relayed to me by Miss Gwenith Penry, who has very kindly given me permission to post these images online. 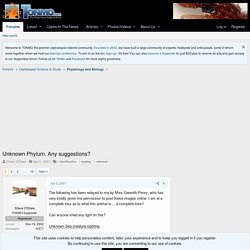 I am at a complete loss as to what this animal is ... a complete loss!! Can anyone shed any light on this? Unknown Sea creature sighting During the 09.30 dolphin watching cruise on the 27/03/2007 an unidentified animal was spotted. Company: Ocean Safaris Vessel: Dolphin 1 (approx 8m) Crew: Skipper – Steve . Visual Description. , babyanimalgifs: This is not CGI. This is a... TYWKIWDBI ("Tai-Wiki-Widbee"): Unwalkable beach in the Azores. YouTube. Catalogue of Organisms: More Giant Larvae. Just a brief post - the air-conditioning in our office hasn't been working these past two days, I'm currently sitting in thirty degree-plus heat, and consequently I simply haven't the mental strength to compose anything more. 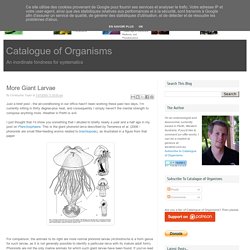 Catalogue of Organisms: I Can Has Mutant Larvae? I've covered Salinella and Buddenbrockia, now I'll move onto another of the 'living problematica', though today's subject is arguably not as problematic. 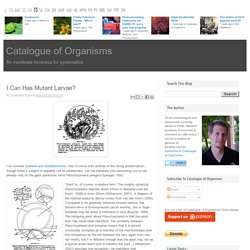 Let me introduce you (assuming you've not already met) to the giant planktonic larva Planctosphaera pelagica Spengel, 1932. 'Giant' is, of course, a relative term. The roughly spherical Planctosphaera reaches about 10mm in diameter (van der Horst, 1936) or even 25mm (Williamson, 2001). A diagram of the internal anatomy above comes from van der Horst (1936). Lophenteropneusts and Beyond – Lord Geekington. 【水中映像】ハダカゾウクラゲ 体の作りと捕食〜海のうきもの〜Cute large floating sea snail “Pterotrachea coronata” Tactile sensing in the octopus. Figure 1: A blind octopus grasps a test object [P1, see Figure 1] with its suckers prior to making a decision to take or reject it. 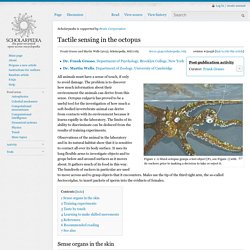 All animals must have a sense of touch, if only to avoid damage. The problem is to discover how much information about their environment the animals can derive from this sense. This deep sea comb jelly (genus: Cestum) looks like an underwater northern lights : TheDepthsBelow. CAPTAIN VOSTERLOCH AND THE LONG PLAYING SPONGE – William Sutton. By William Sutton and John Sutton Do you sing to your sponge? 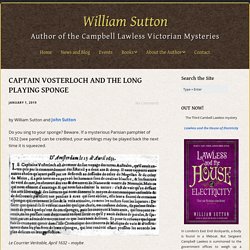 Beware. If a mysterious Parisian pamphlet of 1632 [see panel] can be credited, your warblings may be played back the next time it is squeezed. “A certain Captain Vosterloch has discovered a sponge used by natives of the southern seas to communicate across long distances. Simply squeeze and the message spoken into it is be replayed exactly.” [1] Can a sponge really record sound? Sponge Animation: Wild Ride Through A Sponge. Pattern Radio: Whale Songs - Alexander Chen - Medium. How much audio has PIFSC recorded? 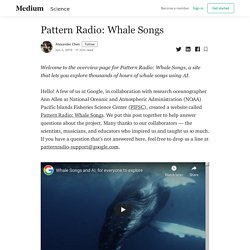 PIFSC’s network extends to 13 different recordings sites, several of which have been monitored for a decade or more. That adds up to more than 200 terabytes (about 170,000 hours worth) of underwater ocean recordings. If you were to sit and listen to all of that audio straight through it would take you more than 19 years. What audio is hosted on the site? The Pattern Radio: Whale Songs website has about a year and a half of PIFSC’s recordings, taken off the coast of Hawaii (the big island) from March 2014 to August 2015, totaling more than 8,000 hours.

How is the audio recorded? The data on the website comes from custom-built recorders called high-frequency acoustic recording packages (HARPs). Beebe's Abyssal Fishes. Beebe's Abyssal Fishes (The word fishes indicates a different species in Biology, different from the plural fish) are deep-sea fish observed by William Beebe in a bathysphere in the North Atlantic Ocean off Nonsuch Island, Bermuda, between 1930 and 1934 and never seen since. These include an Abyssal Rainbow Gar, Bathysphaera Intacta, Five-Lined Constellation Fish, Pallid Sailfin, and a Three-Starred Anglerfish. Beebe’s bathysphere dives incorporated the first direct observations of abyssal fishes in their natural environment. On 22 November 1932, Bermuda-based zoologist Dr William Beebe was 2100 ft beneath the surface of the sea in a bathysphere, sited 5 miles southeast of Bermuda's Nonsuch Island. The most beautiful animal you've never seen.

When I first saw a sea sapphire I thought I was hallucinating. The day had been anything but normal, but this part will always stand out. I’d spent the afternoon on a small dingy off the coast of Durban, South Africa.