Launch Schedule. A regularly updated listing of planned orbital missions from spaceports around the globe. 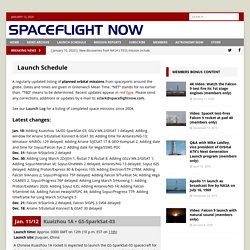 Dates and times are given in Greenwich Mean Time. “NET” stands for no earlier than. “TBD” means to be determined. Recent updates appear in red type. Please send any corrections, additions or updates by e-mail to: sclark@spaceflightnow.com. See our Launch Log for a listing of completed space missions since 2004. Latest changes:

One Month Itinerary to the UK - Fodor's Travel Talk Forums. "Do you think it is possible to park the car at a train station on the edges of Oxford for the evening? 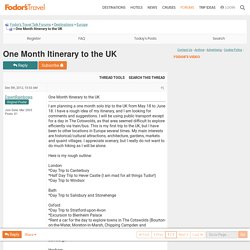 " No such thing really: the trains to Oxford's NW are just too infrequent for this to make much sense. The equivalent would be the Park & Rides ( whence a bus into town (buses from 0600 - 2330. 17 Top-Rated Tourist Attractions in London. It's little wonder London is one of the world's top tourist destinations, attracting upward of 15 million visitors each year. 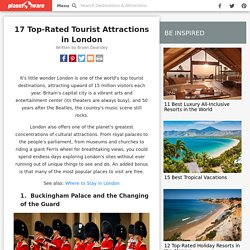 Britain's capital city is a vibrant arts and entertainment center (its theaters are always busy), and 50 years after the Beatles, the country's music scene still rocks. London also offers one of the planet's greatest concentrations of cultural attractions. From royal palaces to the people's parliament, from museums and churches to riding a giant Ferris wheel for breathtaking views, you could spend endless days exploring London's sites without ever running out of unique things to see and do. An added bonus is that many of the most popular places to visit are free. 14 Top-Rated Tourist Attractions in England. One of the most visited countries in the world, England offers almost endless possibilities for things to see and do. 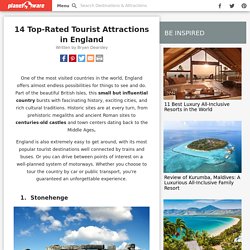 Part of the beautiful British Isles, this small but influential country bursts with fascinating history, exciting cities, and rich cultural traditions. Historic sites are at every turn, from prehistoric megaliths and ancient Roman sites to centuries-old castles and town centers dating back to the Middle Ages. England is also extremely easy to get around, with its most popular tourist destinations well connected by trains and buses. 11 Top-Rated Weekend Breaks in Ireland. Written by Alison AbbottMar 3, 2019 The romantic image of Ireland painted with green rolling hills, a rugged coastline, and captivating historic castles in reality lives up to the portrait. 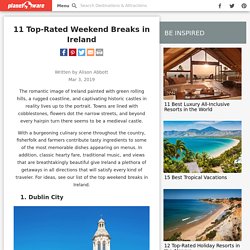 Towns are lined with cobblestones, flowers dot the narrow streets, and beyond every hairpin turn there seems to be a medieval castle. With a burgeoning culinary scene throughout the country, fisherfolk and farmers contribute tasty ingredients to some of the most memorable dishes appearing on menus. In addition, classic hearty fare, traditional music, and views that are breathtakingly beautiful give Ireland a plethora of getaways in all directions that will satisfy every kind of traveler. For ideas, see our list of the top weekend breaks in Ireland. 1. Irish hospitality comes to life in the city of Dublin. The traditional Irish restaurants will satisfy cravings for Irish stew, soda bread, and black pudding. 17 Top-Rated Tourist Attractions in Ireland. Written by Andrew BirbeckMay 4, 2020 We may earn a commission from affiliate links () Welcoming and wonderfully rich in culture, Ireland, the "Emerald Isle," is sure to put a sparkle in your eye. 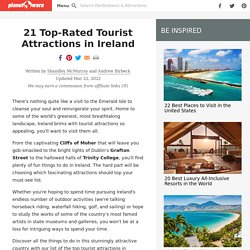 You'll love its friendly people; laid-back attitude; often tragic yet fascinating history; and its rugged, romantic landscapes. This is "the land of saints and scholars," with more Nobel Prize winners for literature than any other country in the world. Topping it all, the country's capital of Dublin was designated a UNESCO City of Literature in 2010. Places to visit and attractions for tourists are abundant and infinitely varied. Discover all the things to do in this stunningly attractive country with our list of the top tourist attractions in Ireland. Note: Some businesses may be temporarily closed due to recent global health and safety issues. National Rail Map. The National Rail map contains all the Train Operating Companies (TOC's) and the major routes that trains travel along. 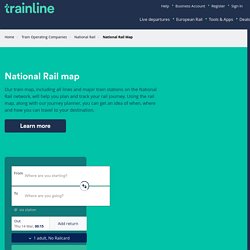 These rail services are clearly defined on the train map, and you can see, which TOC is servicing your rail journey. While not every train station is shown on the map, you can get a clear idea for which stations are the most popular, and are served by the most trains. You can also use our rail map to decide a scenic route for your train journey. If time is not a factor when travelling, the National Rail map will certainly give you the opportunity to map out a more enjoyable route, and maybe even make a couple of stops along the way to take in some local sights. 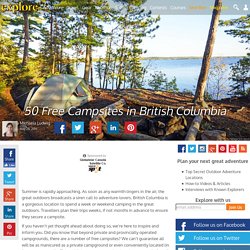 As soon as any warmth lingers in the air, the great outdoors broadcasts a siren call to adventure-lovers. British Columbia is a gorgeous location to spend a week or weekend camping in the great outdoors. Travellers plan their trips weeks, if not months in advance to ensure they secure a campsite. If you haven't yet thought ahead about doing so, we're here to inspire and inform you.