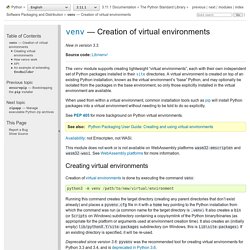 Each virtual environment has its own Python binary (allowing creation of environments with various Python versions) and can have its own independent set of installed Python packages in its site directories. Creation of virtual environments is done by executing the pyvenv script: pyvenv /path/to/new/virtual/environment Running this command creates the target directory (creating any parent directories that don’t exist already) and places a pyvenv.cfg file in it with a home key pointing to the Python installation the command was run from. It also creates a bin (or Scripts on Windows) subdirectory containing a copy of the python binary (or binaries, in the case of Windows). On Windows, you may have to invoke the pyvenv script as follows, if you don’t have the relevant PATH and PATHEXT settings: or equivalently: Note. Python Virtual Environments - a primer. In this article, we’ll show how to use virtual environments to create and manage separate environments for your Python projects, each using different versions of Python for execution, as well as how Python dependencies are stored and resolved. 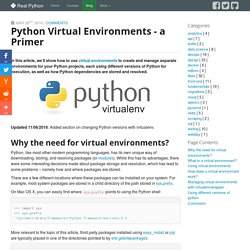 Updated 11/06/2016: Added section on changing Python versions with virtualenv. Why the need for virtual environments? Python, like most other modern programming languages, has its own unique way of downloading, storing, and resolving packages (or modules). While this has its advantages, there were some interesting decisions made about package storage and resolution, which has lead to some problems – namely how and where packages are stored. There are a few different locations where these packages can be installed on your system. On Mac OS X, you can easily find where sys.prefix points to using the Python shell: So, why do all of these little details matter? 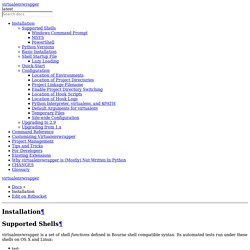 Its automated tests run under these shells on OS X and Linux: bashkshzsh It may work with other shells, so if you find that it does work with a shell not listed here please let me know. If you can modify it to work with another shell without completely rewriting it, then send a pull request through the bitbucket project page. Windows Command Prompt¶ David Marble has ported virtualenvwrapper to Windows batch scripts, which can be run under Microsoft Windows Command Prompt. It is possible to use virtualenv wrapper under MSYS with a native Windows Python installation. Export WORKON_HOME=$HOME/.virtualenvs export MSYS_HOME=/c/msys/1.0 source /usr/local/bin/virtualenvwrapper.sh or: export WORKON_HOME=$HOME/.virtualenvs export MSYS_HOME=C:\msys\1.0 source /usr/local/bin/virtualenvwrapper.sh PowerShell¶ Guillermo López-Anglada has ported virtualenvwrapper to run under Microsoft’s PowerShell.

Virtual Environments. Virtualenv is a tool to create isolated Python environments. virtualenv creates a folder which contains all the necessary executables to use the packages that a Python project would need. 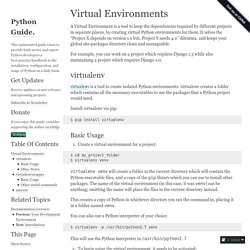 Basic Usage Create a virtual environment for a project: $ cd my_project_folder $ virtualenv venv virtualenv venv will create a folder in the current directory which will contain the Python executable files, and a copy of the pip library which you can use to install other packages. The name of the virtual environment (in this case, it was venv) can be anything; omitting the name will place the files in the current directory instead. This creates a copy of Python in whichever directory you ran the command in, placing it in a folder named venv. You can also use a Python interpreter of your choice. $ virtualenv -p /usr/bin/python2.7 venv This will use the Python interpreter in /usr/bin/python2.7 To begin using the virtual environment, it needs to be activated: