Legacies - Myths and Legends - England - Kent - The Norman Conquest: a family affair. Results for 'ti:A social and religious history of the Jews : late Middle Ages and era of European expansion, 1200-1650. au:Baron, Salo W.' MorgansLists.com: 60 Examples Of Real Medieval Clothing - An Evolution Of Fashion. Bishop Stephen Gardiner's Letter to Thomas Cromwell, regarding the Oath of Succession. May, 1534. George Neville, Archbishop of York. George Neville was the younger brother of Richard Neville, Earl of Warwick (a.k.a the Kingmaker) and also John Neville who was briefly the Earl of Northumberland. 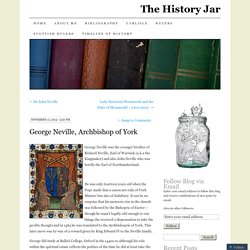 He was only fourteen years old when the Pope made him a canon not only of York Minster but also of Salisbury. It can be no surprise that his meteoric rise in the church was followed by the Bishopric of Exeter – though he wasn’t legally old enough to run things (he received a dispensation to take the profits though) and in 1465 he was translated to the Archbishopric of York. Feud, Violence and Practice. Essays in Medieval Studies in Honor of Stephen D. White. Indiana University Digital Library Program. Unavailable in your country. Unavailable in your country. Five Stages of Antisemitism in Art. Jesus Brought Before Caiaphas -- from Salvin Hours c 1275. 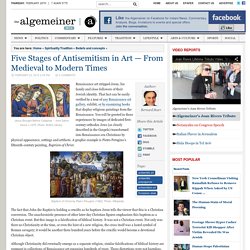 Photo: British Library. Renaissance art stripped Jesus, his family and close followers of their Jewish identity. That fact can be easily verified by a tour of any Renaissance art gallery, exhibit, or by examining books that display religious paintings from the Renaissance. You will be greeted in these experiences by images of dedicated first-century orthodox Jews (as clearly described in the Gospels) transformed into Renaissance-era Christians by physical appearance, settings and artifacts. A graphic example is Pietro Perugino’s fifteenth-century painting, Baptism of Christ. The Land of Cockaygne: Introduction. Anglo-Irish poems of the Middle Ages: The Kildare Poems. Internet History Sourcebooks Project. Medieval Sourcebook: Stephen de Bourbon (d. 1262): De Supersticione: On St. 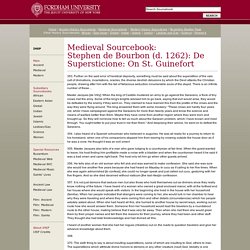 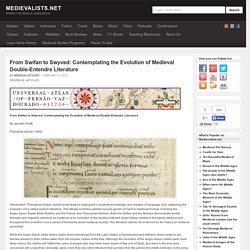 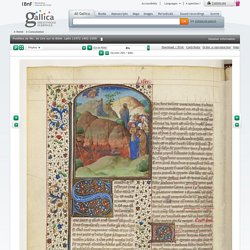 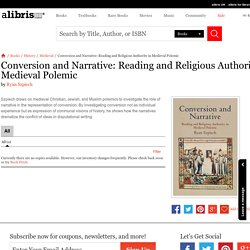 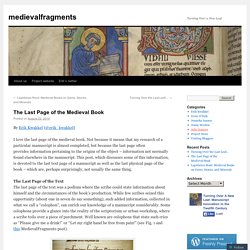 Not because it means that my research of a particular manuscript is almost completed, but because the last page often provides information pertaining to the origins of the object – information not normally found elsewhere in the manuscript. This post, which discusses some of this information, is devoted to the last text page of a manuscript as well as the last physical page of the book – which are, perhaps surprisingly, not usually the same thing. Literature/Gesta Danorum. First page of the 1514 print. 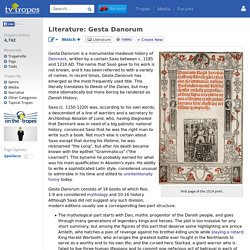 Gesta Danorum is a monumental medieval history of Denmark, written by a certain Saxo between c. 1185 and 1210 AD. The name that Saxo gave to his work is not known, and it has been referred to with a variety of names. In recent times, Gesta Danorum has emerged as the most frequently used title. This literally translates to Deeds of the Danes, but may more idiomatically but more boring be rendered as Danish History.Saxo (c. 1150-1220) was, according to his own words, a descendant of a line of warriors and a secretary to Archbishop Absalon of Lund, who, having diagnosed that Denmark was in need of a big patriotic national history, convinced Saxo that he was the right man to write such a book. 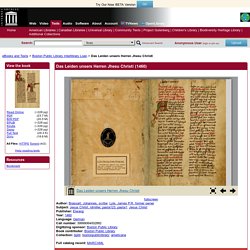 Signed by Johannes Braxatoris, an alias of contemporary Burgundian composer Johannes Brassart (OCLC), in Elwang (Ellwangen, Germany) Bolintineanu_ioana_a_201211_PhD_thesis.pdf. Unavailable in your country. Item 25, The Feasts of All Saints and All Souls: Introduction. Origin, Genre, and Themes The holy day of All Saints (All Hallows) dates back to the practices of the early Church, but it was not universally observed until the eighth century, when Pope Gregory III fixed November 1 as the day dedicated to the worship of all saints. 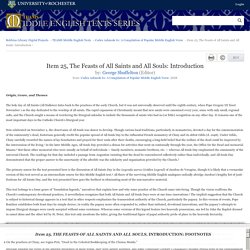 The rapid expansion of Christi­anity meant that new saints were canonized every year, some with only small, regional cults, and the Church sought a means of reordering the liturgical calendar to include the thousands of saints who had no (or little) recognition on any other day. Amazon.com: Visions of the Other World in Middle English (Annotated Bibliographies) (9780859914239): Robert Easting: Books. Illustrations of Medieval Romance on Tiles from Chertsey Abbey - Livres sur Google Play.

Tales - MS. Found in a Bottle (Text-D) ­ [page 111:] OF my country and of my family I have little to say. Ill usage and length of years have driven me from the one, and estranged me from the other. Hereditary wealth afforded me an education of no common order, and a contemplative turn of mind enabled me to methodize the stores which early study very diligently garnered up. Tales - MS. Found in a Bottle (Text-D)