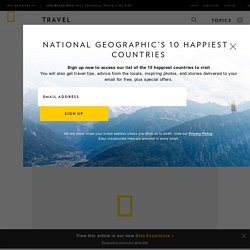 Rapa Nui’s mysterious moai statues stand in silence but speak volumes about the achievements of their creators. The stone blocks, carved into head-and-torso figures, average 13 feet (4 meters) tall and 14 tons. The effort to construct these monuments and move them around the island must have been considerable—but no one knows exactly why the Rapa Nui people undertook such a task. Most scholars suspect that the moai were created to honor ancestors, chiefs, or other important personages, However, no written and little oral history exists on the island, so it’s impossible to be certain.

It is generally thought that the Rapa Nui’s demise resulted from an environmental catastrophe of their own making. How to Get There When to Visit. Ultimate Tutankhamun. On this day: Mungo man remains found. ON 26 FEBRUARY 1974, a young geologist managed to stretch Australian history by 20,000-odd years when he found 40,000-year-old human remains buried in a dry lake bed in south-western New South Wales. 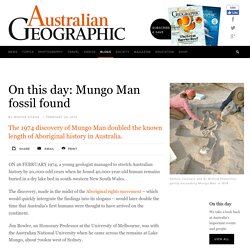 The discovery, made in the midst of the Aboriginal rights movement – which would quickly intergrate the findings into its slogans – would later double the time that Australia's first humans were thought to have arrived on the continent. Jim Bowler, an Honorary Professor at the University of Melbourne, was with the Australian National University when he came across the remains at Lake Mungo, about 700km west of Sydney. "We were then confronted by a whole new chapter in Australian history that nobody had previously anticipated," Jim said. Bradshaw (Gwion Gwion) rock art. Gwion Gwion (Bradshaw) figures. 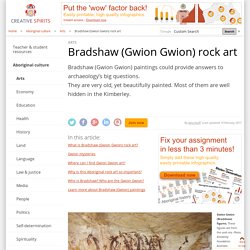 These figures are from the sash era. Photo: Kimberley Foundation Australia What is Bradshaw (Gwion Gwion) rock art? Bradshaw, or Gwion rock art, are sophisticated paintings dotted across approximately 100,000 sites spread over an area of 50,000 square kilometres [3] (about the size of Costa Rica in Central America, or Slovakia in Europe). They are thought to be at least 17,000, perhaps more than 25,000 years old. Pharaoh Tutankhamun. King Tut, short for King Tutankhamun, was a pharaoh during Ancient Egypt's New Kingdom. 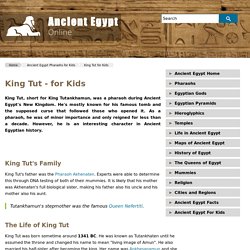 He's mostly known for his famous tomb and the supposed curse that followed those who opened it. As a pharaoh, he was of minor importance and only reigned for less than a decade. Tutankhamun Facts - History for Kids. Tutankhamun Tutankhamun or “King Tut” is probably the most well-known Egyptian pharaoh. 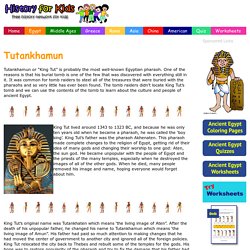 One of the reasons is that his burial tomb is one of the few that was discovered with everything still in it. It was common for tomb raiders to steel all of the treasures that were buried with the pharaohs and so very little has ever been found. The tomb raiders didn’t locate King Tut’s tomb and we can use the contents of the tomb to learn about the culture and people of ancient Egypt. Ancient Egyptian Biography for Kids: Tutankhamun. History >> Biography >> Ancient Egypt Golden funeral mask of Tutankhamunby Jon Bodsworth. 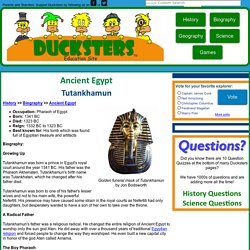 Tutankhamun facts! Here at Nat Geo Kids, we know how much our readers love reading facts about Ancient Egypt. 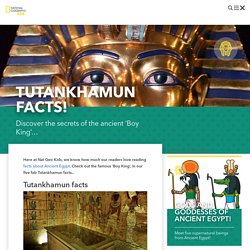 Check out the famous ‘Boy King’, in our five fab Tutankhamun facts.. 1. King Tut was nicknamed the Boy King because he began his reign when he was only nine years old! 2. Tutankhamun died when he was only 18, and his body was mummified, which is how the ancient Egyptians preserved their dead. Resources for Primary and Secondary Students - ABC Education. Archaeology. Lake Mungo is home to the earliest modern human remains found in Australia, and possibly the world. 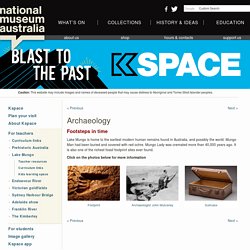 Mungo Man had been buried and covered with red ochre. Mungo Lady was cremated more than 40,000 years ago. It is also one of the richest fossil footprint sites ever found. Video and more. Mungo Man: 20/02/2018, Behind the News. The oldest skeleton ever found in Australia, Mungo Man, has been returned to his home 40,000 years after his death. 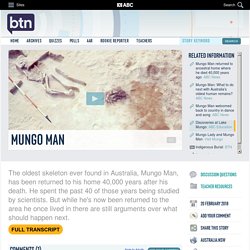 He spent the past 40 of those years being studied by scientists. But while he's now been returned to the area he once lived in there are still arguments over what should happen next. 42 thousand years. That's more than 15 million sunrises. It's an amount of time pretty much impossible to imagine, and that's how long-ago Mungo Man lived. MARY PAPPIN: Mungo Man showed Australia that Aboriginal people have been here for a very, very long time. The Bradshaw Paintings - Australian Rock Art Archive. Easter Island - Ancient Civilizations for Kids and Teachers. Easter Island Moai. Primary History - World History - Easter Island Statue. Fun Facts about Stonehenge for kids. BBC Bitesize - What is Stonehenge? Stonehenge facts for kids. Calling all young historians and budding archaeologists – we’re off to investigate the mysteries behind a perplexing prehistoric puzzle! 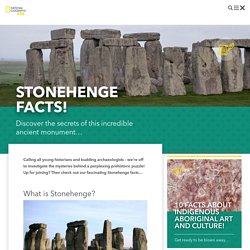 Up for joining? Then check out our fascinating Stonehenge facts… What is Stonehenge? Found on England’s Salisbury Plain in Wiltshire, Stonehenge is a huge man-made circle of standing stones. Built by our ancestors over many hundreds of years, it’s one of the world’s most famous prehistoric monuments… And one of it’s biggest mysteries, too! YouTube - Otzi the iceman. Ötzi - South Tyrol Museum of Archaeology. Otzi the iceman. Updated January 19, 2016. Otzi the Iceman, also called Similaun Man, Hauslabjoch Man or even Frozen Fritz, was discovered in 1991, eroding out of a glacier in the Italian Alps near the border between Italy and Austria. The human remains are of a Late Neolithic or Chalcolithic man who was died between about 3350-3300 BC. Because he ended up in a crevasse, his body was perfectly preserved by the glacier in which he was found, rather than crushed by the glacier's movements in the last 5,000 years. The remarkable level of preservation has allowed archaeologists the first detailed look into clothing, behavior, tool use and diet of the period.