Leaked memo shows George Soros worked to push Greece to support Ukraine coup, paint Russia as enemy. Last week we reported on the DC Leaks hack of what was over 2,500 documents detailing how George Soros and his NGOs influence world leaders, drive foreign policy, and help to create unrest in sovereign nations, that many times leads to chaos and civil war. 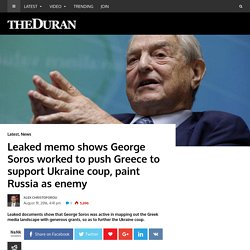 One country of particular focus for George Soros and his NGOs is Ukraine. Why Does Trump Still Refuse to Expose Obama? Trump lied to say that Obama had a fake birth certificate, but Trump never attacked Obama for what were Obama's real crimes. 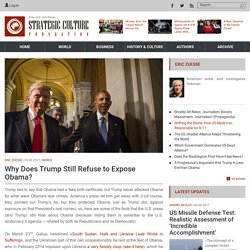 America’s press let him get away with it (of course, they pointed out Trump's lie, but they protected Obama, just as Trump did, against exposure on that President's real crimes); so, here are some of the facts that the U.S. press (and Trump) still hide about Obama (because hiding them is essential to the U.S. aristocracy’s agenda — shared by both its Republicans and its Democrats): America’s criminal ‘news’ media never even reported the coup, nor that in 2011 the Obama regime began planning for a coup in Ukraine, and that by 1 March 2013 they started organizing it inside the U.S.

And now read this. And then, too, Obama pressed for and (with his colleagues in Saudi Arabia, Turkey, Qatar, and UAE) achieved the destruction of Syria. Russia Demands To Know Who’s Running America As Wednesday War Deadline Looms. World's Largest English Language News Service with Over 500 Articles Updated Daily "The News You Need Today…For The World You’ll Live In Tomorrow. 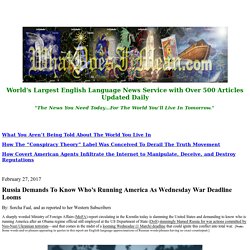 " What You Aren’t Being Told About The World You Live In How The “Conspiracy Theory” Label Was Conceived To Derail The Truth Movement How Covert American Agents Infiltrate the Internet to Manipulate, Deceive, and Destroy Reputations February 27, 2017. Instead of 'Draining the Swamp', Trump is Feeding the Alligators. Eric ZUESSE Zerohedge’s “Tyler Durden” headlined on February 21st, “Bannon Breaks With Pence, Delivers Warning To Europe” and noted that before U.S. 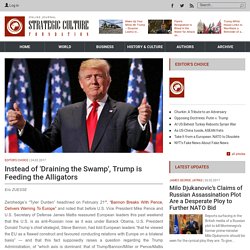 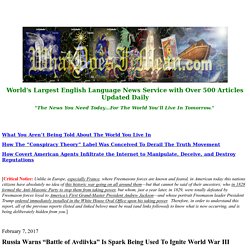 " What You Aren’t Being Told About The World You Live In How The “Conspiracy Theory” Label Was Conceived To Derail The Truth Movement How Covert American Agents Infiltrate the Internet to Manipulate, Deceive, and Destroy Reputations [Critical Notice: Unlike in Europe, especially France, where Freemasons forces are known and feared, in American today this nations citizens have absolutely no idea of this historic war going on all around them—but that cannot be said of their ancestors; who in 1828 formed the Anti-Masonic Party to stop them from taking power, but whom, just a year later, in 1829, were totally defeated by Freemason forces loyal to America’s First Grand-Master President Andrew Jackson—and whose portrait Freemason leader President Trump ordered immediately installed in the White House Oval Office upon his taking power. February 7, 2017.

Things Will Get Worse Until US Stops Lying About Crimea. Unless the U.S. government’s lies about Crimea — the ‘Russia seized Crimea’ narratives — become acknowledged to be lies, war between the U.S. and Russia can only continue to become increasingly likely, because the world is sliding toward World War III based upon these lies, and will therefore inevitably continue that slide until these lies are publicly repudiated by the U.S. government, which is their sole source. 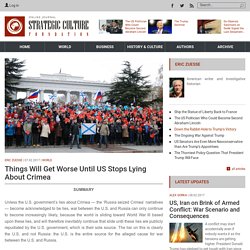 The liar on this is clearly the U.S. and not Russia: the U.S. is the entire source for the alleged cause for war between the U.S. and Russia. Anyone who is closed-minded to the possibility that the U.S. is lying and that Russia is telling the truth about the relationship between the two countries, would therefore be simply wasting time to read here, because the solid documentation that will be provided here will prove that that’s not only a possibility; it is the fact, and those widespread false beliefs will, indeed, be disproven here. All U.S. Lawrence J. Korb, who was U.S. Shocking UN Report Lists Crimes by the Ukrainian Authorities. The 13th report of the UN High Commissioner for Human Rights on the human rights situation in Ukraine between 16 November 2015 and 15 February 2016, when the Minsk Agreements were in force, has come as a shock to Kiev. 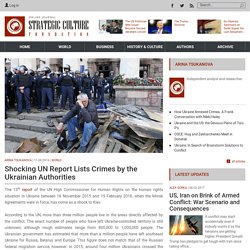 According to the UN, more than three million people live in the areas directly affected by the conflict. The exact number of people who have left Ukraine-controlled territory is still unknown, although rough estimates range from 800,000 to 1,000,000 people. The Ukrainian government has estimated that more than a million people have left southeast Ukraine for Russia, Belarus and Europe.

This figure does not match that of the Russian federal migration service, however: in 2015, around four million Ukrainians crossed the border, with nearly 2.6 million settling in Russia. More than a million people have arrived from southeast Ukraine. Ukraine_historical_vs_electoral_2010.png (PNG Image, 996 × 670 pixels) How Ukraine Annexed Crimea. A Frank Conversation with Nikki Haley.

The speech by the new US permanent representative to the UN Security Council, Nikki Haley, at a Security Council meeting on 3 February backed up the idea that the foreign policies of two American administrations – the previous one and the current one – will be continued. 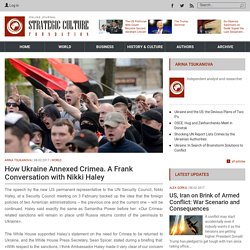 Haley said exactly the same as Samantha Power before her: «Our Crimea-related sanctions will remain in place until Russia returns control of the peninsula to Ukraine». The White House supported Haley’s statement on the need for Crimea to be returned to Ukraine, and the White House Press Secretary, Sean Spicer, stated during a briefing that: «With respect to the sanctions, I think Ambassador Haley made it very clear of our concern with Russia’s occupation of Crimea. Things Will Get Worse Until US Stops Lying About Crimea. The Kiev Snipers: Everyone Agrees That They Fired On BOTH SIDES.

Sniper Attacks As False Flag Terror Random shootings are a type of false flag terror … For example, in 1985 – as part of the “Gladio” (11-21) false flag operations – snipers attacked and shot shoppers in supermarkets randomly in Brabant county, Belgium killing twenty-eight and leaving many wounded. 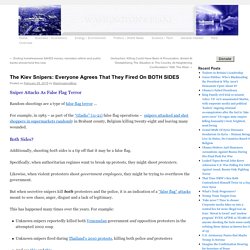 Both Sides? Additionally, shooting both sides is a tip off that it may be a false flag. Specifically, when authoritarian regimes want to break up protests, they might shoot protesters. Likewise, when violent protesters shoot government employees, they might be trying to overthrow the government. But when secretive snipers kill both protesters and the police, it is an indication of a “false flag” attacks meant to sow chaos, anger, disgust and a lack of legitimacy.

Former Ukranian Security Chief Alleges that NEW Government Behind Sniper Attacks. National Security Notice We are NOT calling for the overthrow of the government. 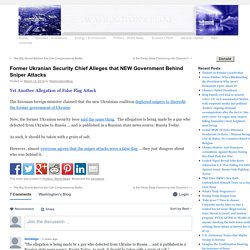 In fact, we are calling for the reinstatement of our government. NYT Whites Out Ukraine’s Brown Shirts. Ukraine's War 'is a prelude to World War III' Says Former Ukrainian U.S. Ambassador. - Advertisement - click here "This [U.S-Russian conflict that's being carried out in Ukraine] is a prelude to World War III. Russia Says Ukrainian Nazis Pay Blackwater for Training. - Advertisement - The Russian Government's Tass 'news' agency is alleging that "The US private military company Academi (formerly known as Blackwater) has confirmed to the Kiev authorities that it is ready to start training an experimental battalion of 550 men as of January at the request of Ukraine's General Staff," according to an unnamed source, which source is probably one of the few remaining anti-nazi bureaucrats in the Ukrainian Government.

The reported price of this Blackwater (a.k.a. "Xe," a.k.a. Article: Ukrainian Soldier Explains Why He Enjoys Killing Russians. - Advertisement - In an unusually lengthy video interview with a soldier of the Ukrainian government, he states why he wants to kill as many residents in the (ethnically Russian) separatist area as possible.

This soldier, named Nazar, was interviewed by Ukraine's Channel 5 TV, the current Ukrainian President Petro Poroshenko's television station until he became President on May 25th. Poroshenko, as Ukraine's President, no longer owns the station. Article: How Bloomberg 'News' Lies. - Advertisement - On December 31st, Josh Rogin of Bloomberg 'News' headlined "Inside Obama's Secret Outreach to Russia," and his opening sentence 'reported' on "the fact that Russian President Vladimir Putin has shown little interest in " halting his aggression in neighboring Ukraine. " The Feds Who Schemed the Coup in Kiev. Is there any credible evidence that Ukraine's 2014 revolution was due to a CIA coup? - Quora.