Bitcoin Transactions Get Stranded as Cryptocurrency Maxes Out. Bitcoin hit a capacity limit that could hamper dreams of it becoming widely used. 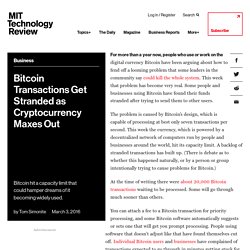 For more than a year now, people who use or work on the digital currency Bitcoin have been arguing about how to fend off a looming problem that some leaders in the community say could kill the whole system. This week that problem has become very real. Some people and businesses using Bitcoin have found their funds stranded after trying to send them to other users. The problem is caused by Bitcoin’s design, which is capable of processing at best only seven transactions per second. This week the currency, which is powered by a decentralized network of computers run by people and businesses around the world, hit its capacity limit. The resolution of the Bitcoin experiment. Massive DDoS attacks on XT users Despite the news blockade, within a few days of launching Bitcoin XT around 15% of all network nodes were running it, and at least one mining pool had started offering BIP101 voting to miners. 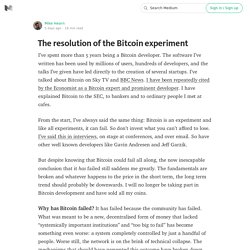 That’s when the denial of service attacks started. The attacks were so large that they disconnected entire regions from the internet: “I was DDos’d. It was a massive DDoS that took down my entire (rural) ISP. In other cases, entire datacenters were disconnected from the internet until the single XT node inside them was stopped.

Worse, the mining pool that had been offering BIP101 was also attacked and forced to stop. The attackers are still out there. Bogus conferences Despite the DoS attacks and censorship, XT was gaining momentum. So I didn’t go. Unfortunately, this tactic was devastatingly effective. Shift Card. Bitcoin Program Helping Refugees Who Don’t Have Documentation For Bank Accounts. How Bitcoin Could Stop China From Becoming The Next Superpower Bully. Electronic money, or e-money, is to normal money as email is to normal (snail) mail: it’s simply an electronic form of value exchange, but with a key advantage in that most types of e-money are not linked to any particular country or government. 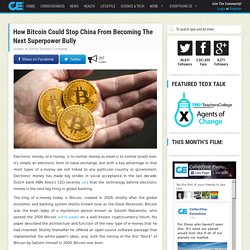 Electronic money has made big strides in social acceptance in the last decade. Dutch bank ABN Amro’s CEO recently said that the technology behind electronic money is the next big thing in global banking. The king of e-money today is Bitcoin, created in 2009, shortly after the global economic and banking system shocks known now as the Great Recession.

Bitcoin Is Left a Wallflower as Banks Borrow Some of Its Features to Boost Efficiency. In the depths of the financial crisis in 2009, someone using the name Satoshi Nakamoto launched a digital currency called Bitcoin that he or she claimed could remove the need to rely on central or commercial banks. 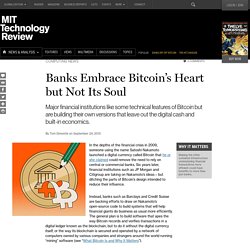 Six years later, financial institutions such as JP Morgan and Citigroup are taking on Nakamoto’s ideas – but ditching the parts of Bitcoin’s design intended to reduce their influence. Instead, banks such as Barclays and Credit Suisse are backing efforts to draw on Nakamoto’s open-source code to build systems that will help financial giants do business as usual more efficiently. The general plan is to build software that apes the way Bitcoin records and verifies transactions in a digital ledger known as the blockchain, but to do it without the digital currency itself, or the way its blockchain is secured and operated by a network of computers owned by various companies and strangers around the world running “mining” software (see “What Bitcoin Is and Why It Matters”).

Orders Bitcoin Options Trading Platform Operator and its CEO to Cease Illegally Offering Bitcoin Options and to Cease Operating a Facility for Trading or Processing of Swaps without Registering. Bitcoin is on the verge of a constitutional crisis. The Bitcoin community is facing one of the most momentous decisions in its six-year history. 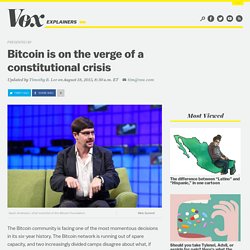 The Bitcoin network is running out of spare capacity, and two increasingly divided camps disagree about what, if anything, to do about the problem. If these two sides fail to reach a consensus, the Bitcoin network could — according to one side, at least — slowly grind to a halt as the number of transactions exceeds the network's capacity to process them. Even worse, if a fix for this problem is forced through prematurely, it could split the Bitcoin network in two and permanently damage public trust in the network. This New Crypto-Technology Could Make the Stock Exchange Obsolete. 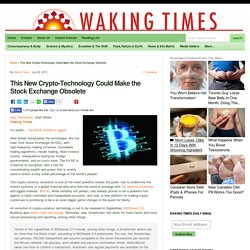 Wall Street manipulates the exchanges, like the New York Stock Exchange (NYSE), with high-frequency trading schemes, immediate trading algorithms, insider trading, retail investor scams, manipulative buying by foreign governments, and so much more. Bitcoin’s Community Faces a Tough Decision about the Network’s Future. In a test of Bitcoin’s ability to adapt to its own growing popularity, the Bitcoin community is facing a dilemma: how to change Bitcoin’s core software so that the growing volume of transactions doesn’t overwhelm the network. 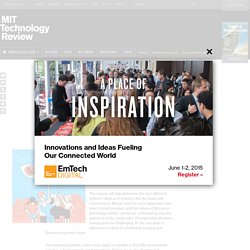 Some fear that the network, as it’s currently designed, could become overwhelmed as early as next year. The answer will help determine the form Bitcoin’s network takes as it matures. Meet 3 New ALTERNATIVE CURRENCIES. (Before It's News) As currencies around the world become more volatile and devalued, alternatives to paper (fiat) money are coming alive. 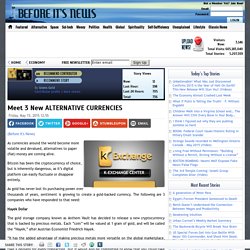 Bitcoin has been the cryptocurrency of choice, but is inherently dangerous, as it’s digital platform can easily fluctuate or disappear entirely. As gold has never lost its purchasing power over thousands of years, sentiment is growing to create a gold-backed currency. Bitcoin for Activists - What You Need to Know. Nathan Schneider, Waging NonviolenceWaking Times Among activists one often finds an aversion to even thinking about money. 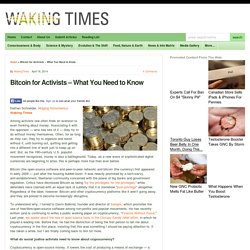 Associating it with the opponent — who has lots of it — they try to do without money themselves. Often, for as long as they can, they try to organize and resist without it, until burning out, quitting and getting into a different line of work just to keep up on rent. But, as the 19th-century U.S. populist movement recognized, money is also a battleground. Today, as a new wave of sophisticated digital currencies are beginning to arise, this is perhaps more true than ever before. Bitcoin (the open-source software and peer-to-peer network) and bitcoin (the currency) first appeared in early 2009 — just after the housing bubble burst. To understand why, I turned to Devin Balkind, founder and director of Sarapis, which promotes the use of free/libre/open-source software among non-profits and popular movements. Cryptocurrency is open-source money. Darkcoin – Official Website. 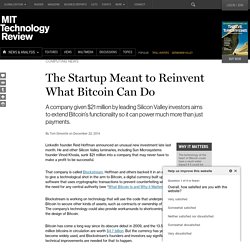 He and other Silicon Valley luminaries, including Sun Microsystems founder Vinod Khosla, sunk $21 million into a company that may never have to make a profit to be successful. That company is called Blockstream. Bitcoin stalls after hitting record prices in 2013. After skyrocketing to more than a thousand dollars in price late last year and attracting global attention, bitcoin, the leading digital currency, has stalled.

Figures obtained by Reuters show that while “wallets” – cyberspeak for accounts – are being created at a steady clip, many of them are empty. Analysts also provided Reuters with data that shows liquidity in the cryptocurrency remains limited. Bitcoin, a virtual currency created through a “mining” process where a computer’s resources are used to perform millions of calculations, has been hailed as revolutionary because of its lack of ties to a central bank and its potential as an alternative to credit cards for paying for goods and services.

However, the currency’s volatility has slowed broader acceptance. The price of bitcoin has plummeted roughly 50% so far this year. Until a unique application emerges that separates it from credit cards, online payments or other currencies, the expansion may remain slow, many market insiders said. Bitcoin Promoter Charles Shrem Pleads Guilty - Law Blog.