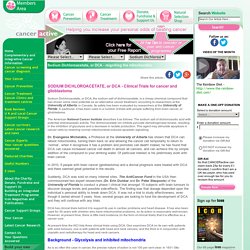 Its safety has been evaluated by researchers at the University of Florida. In particular, it has been used in a number of trials with people suffering from brain cancer, or glioblastoma. The American National Cancer Institute describes it as follows: The sodium salt of dichloroacetic acid with potential antineoplastic activity. The dichloroacetate ion inhibits pyruvate dehydrogenase kinase, resulting in the inhibition of glycolysis and a decrease in lactate production. Dr. DCA: true cancer miracle or fraud? Future of cancer research? - ResearchGate. Cancer miracles seem to crop up everywhere. 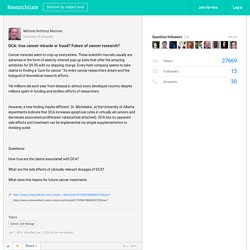 These scientific marvels usually are advertise in the form of sketchy internet pop-up adds that offer the amazing antidotes for $9.95 with no shipping charge. Every herb company seems to take claims to finding a "cure for cancer. " Its every cancer researchers dream and the holygrail of biomedical research efforts. Yet millions die each year from disease in almost every developed country despite millions spent in funding and endless efforts of researchers . However, a new finding maybe different.

Questions: Dichloroacetic acid. Although preliminary studies have shown DCA can slow the growth of certain tumors in animal studies and in vitro studies, there is currently insufficient evidence to support the use of DCA for cancer treatment.[3] Chemistry and occurrence[edit] The chemistry of dichloroacetic acid is typical for halogenated organic acids. 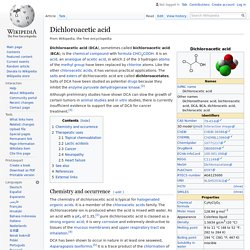 It is a member of the chloroacetic acids family. The dichloroacetate ion is produced when the acid is mixed with water. As an acid with a pKa of 1.35,[1] pure dichloroacetic acid is classed as a strong organic acid; it is very corrosive and extremely destructive to tissues of the mucous membranes and upper respiratory tract via inhalation.[4] Dichloroacetate (DCA) Causes Cancer Cells to Self-Destruct. By Dr. 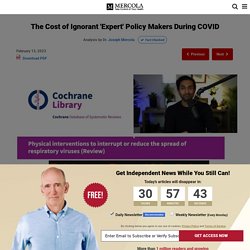 Mercola According to the American Cancer Society, the odds you'll develop cancer in your lifetime are one in two, if you're a man, and one in three, if you're a woman.1 But an experimental cancer drug shown to shrink tumors by correcting metabolic oddities in cancer cells shows promise in the fight against this deadly disease. The synthetic drug DCA (dichloroacetate) DOES indeed kill cancer cells, both in the lab and in human beings. Dichloroacetate (DCA) Causes Cancer Cells to Self-Destruct. Researchers develop new dichloroacetate formulation for cancer treatment. Health forums were abuzz in 2007 with news that a simple, inexpensive chemical may serve as a viable treatment to many forms of cancer. 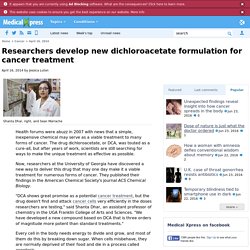 The drug dichloroacetate, or DCA, was touted as a cure-all, but after years of work, scientists are still searching for ways to make the unique treatment as effective as possible. Now, researchers at the University of Georgia have discovered a new way to deliver this drug that may one day make it a viable treatment for numerous forms of cancer. They published their findings in the American Chemical Society's journal ACS Chemical Biology. Potential cancer drug DCA tested in early trials. DCA has been tested in a small trial Updated below The controversial drug DCA (dichloroacetate) is in the headlines again, after researchers in Canada carried out a small-scale clinical trial of the drug in five patients with advanced brain tumours. 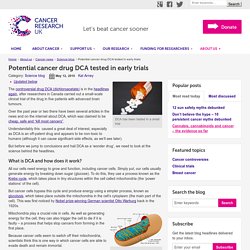 Over the past year or two there have been several articles in the news and on the internet about DCA, which was claimed to be cheap, safe and “kill most cancers”. Understandably this caused a great deal of interest, especially as DCA is an off-patent drug and appears to be non-toxic to humans (although it can cause significant side effects, as we’ll see later). But before we jump to conclusions and hail DCA as a ‘wonder drug’, we need to look at the science behind the headlines. What is DCA and how does it work? All our cells need energy to grow and function, including cancer cells. Cotreatment with dichloroacetate and omeprazole exhibits a synergistic antiproliferative effect on malignant tumors. DCA Information / DCA Side Effects. Are there Any Side Effects of DCA Treatment? Yes, there can be. 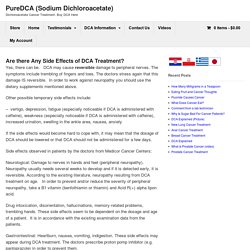 DCA may cause reversible damage to peripheral nerves. The symptoms include trembling of fingers and toes. The doctors stress again that this damage IS reversible. In order to work against neuropathy you should use the dietary supplements mentioned above. Other possible temporary side effects include: – vertigo, depression, fatigue (especially noticeable if DCA is administered with caffeine), weakness (especially noticeable if DCA is administered with caffeine), increased urination, swelling in the ankle area, nausea, anxiety If the side effects would become hard to cope with, it may mean that the dosage of DCA should be lowered or that DCA should not be administered for a few days. 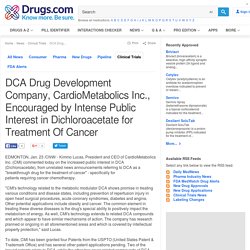 Other potential applications include obesity and cancer. The common element in treating these diverse diseases is the drug's special ability to positively impact the metabolism of energy. As well, CMI's technology extends to related DCA compounds and which appear to have similar mechanisms of action. CMI X-11S (DCA intravenous formulation) is the company's lead clinical stage drug product. Background Information. Role of SLC5A8, a plasma membrane transporter and a tumor suppressor, in the antitumor activity of dichloroacetate.