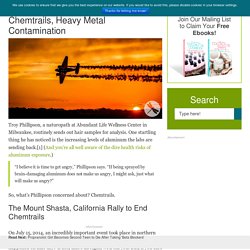 One startling thing he has noticed is the increasing levels of aluminum the labs are sending back.[1] (And you’re all well aware of the dire health risks of aluminum exposure.) Learn more with the #OpChemtrails Information Booklet #WeatherModification. Chemtrails: CFR Discuss Geoengineering with John Brennan. □□… "We're Firing Trillion Watt Lasers into the Sky": Top Scientist Admits to Weather Modification on CBS. In the aftermath of the devastation wrought by Hurricane Harvey and Hurricane Irma, and Hurricane Jose brewing in the Atlantic, many people are looking for answers as to the increasingly volatile weather being witnessed. 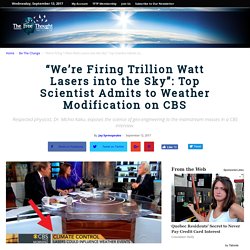 And while climate change is one potential cause, there are other lesser known activities that could potentially be playing a role in the manifestation of these weather anomalies. While weather modification and geo-engineering are still somewhat taboo subjects to the mainstream, often considered to be in the realm of conspiracy theory, there is a significant body of academic research and science that confirms that these technologies not only exist but are being operationalized. No, the Free Thought Project is not claiming the government, nor anyone else is making hurricanes or actively controlling the weather. 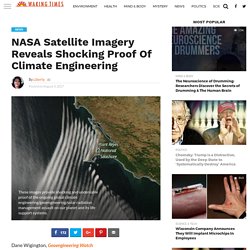 Dane Wigington, Geoengineering WatchWaking Times As the saying goes, a picture is worth a thousand words. The photo images shown below were captured from NASA satellite sources, they are truly alarming. Chemtrail Pilot Signals World That Trails Are NOT Contrails! 100% Proof! Video Source: Truth Warriors Was this chemtrail pilot signaling the world that he was SPRAYING chemtrails by turning the system on and off over and over and over again and making dashed lines across the sky? 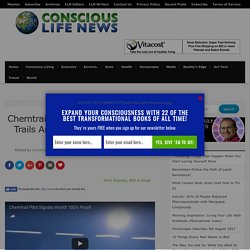 If the trails behind the plane were normal condensation trails, they would NOT turn off and on like they do in this video. Secret Chemtrail Pilot Speaks, on Dec 8, 2014. Chemtrail Plane Interior (Ballast Barrels) Scientist Blows Whistle On Chemtrails At Ted Conference - Your News Wire. A climate scientist attending the annual TED conference in Vancouver, Canada, has blown the whistle on the dangers of spraying chemtrails in our atmosphere. 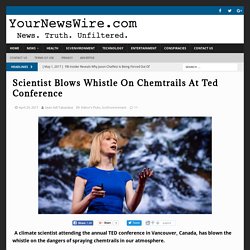 During the 2017 talk, several speakers were tasked with discussing the alleged benefits of geoengineering in a bid to combat climate change. Activistpost.com reports: Business Insider reported: On Wednesday morning, computer theorist Danny Hillis got onstage and proposed a series of ideas for what he called a “thermostat to turn down the temperature of the earth.”

You Are NOW Breathing Ethylene Dibromide, Virally Mutated Molds, Nano-Particulates of Aluminum & Barium, & Polymer Fibers With Unidentified Bio-Active Material. This image showing a relatively pristine earth was taken during the Apollo Missions between 1969 and 1972. 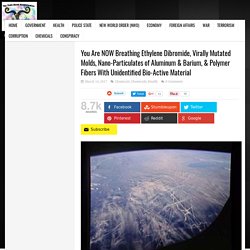 The earth floats like a beautiful blue and white jewel in space with no haze or luminosity covering it. Compare it with the next few images of earth taken during the era of chemtrails. SHOCKING - Pilots, Doctors and Scientists Tell the Truth About Chemtrails. CIA Director States (On Camera) His Support For Geoengineering & Spraying Particles Into The Atmosphere – Collective Evolution. Air Traffic Control to Pilot: 'You Have A Chemtrail Off Your Left Wing'

An air traffic controller told a Southwest pilot he had “a chemtrail off (his) left wing” last week ... 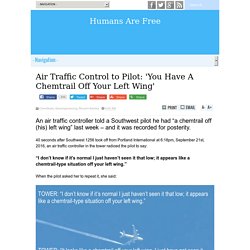 An air traffic controller told a Southwest pilot he had “a chemtrail off (his) left wing” last week – and it was recorded for posterity. 40 seconds after Southwest 1256 took off from Portland International at 6:18pm, September 21st, 2016, an air traffic controller in the tower radioed the pilot to say: New Aviation Technologies Could Reduce Airline Pollution by 75 Percent and Slash Fuel Consumption in Half. January 11th, 2017 By Carolanne Wright Contributing writer for Wake Up World As someone who lives to travel, the reality of jet transportation and the severe effect it has on the planet is never far from my mind. 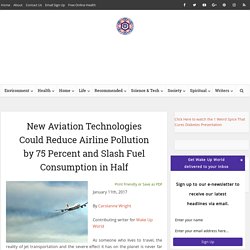 Why I Write About (and Debunk) the Chemtrail Conspiracy Theory. EXPOSED! Photos From INSIDE Chemtrail Planes Like You’ve NEVER Seen Before! Disclaimer: The content on www.enlightened-consciousness.com is information based on the opinions and scholarship of the authors. 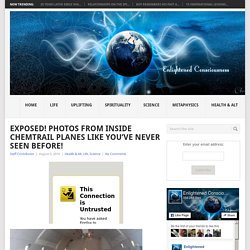 This site is intended for educational and commentary purposes only, both of which are strictly protected by Free Speech. Enlightened Consciousness is not responsible for the opinions or content written by its writers. The information on this website is not intended to replace your relationship with a qualified health care professional and is not intended as medical advice. All trademarks and registered trademarks mentioned here are the property of their respective owners and are not used here for commercial purposes. Saudi Princess of the Royal Family Says Geoengineering is a 'Weapon Of Mass Destruction' 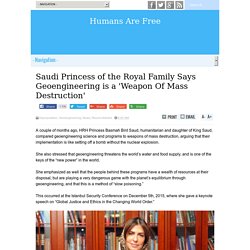 Irrefutable Film Footage Of Chemtrail Aerosol Spraying - Truth Kings. The geoengineers continue to ramp up their ongoing aerial bombardment of planet Earth. In order to wake up the sleeping masses to the war being waged against them in skies around the globe, visual proof is essential. UK Just Rejected Petition To Stop Chemtrails - Truth Kings. Sen. John McCain Creates Chemtrail Campaign Ad - Truth Kings. Sen. John McCain’s (R-AZ) campaign launched an attack against their primary opponent, Arizona state Sen. Kelli Ward, over her willingness to discuss chemtrails as a legitimate topic. The attack ad came in the form of local television ad spots. McCain labeled Ward, “Chemtrail Kelli” in the ads.