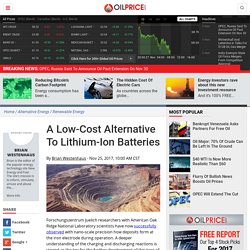 A deeper understanding of the charging and discharging reactions is viewed as the key for the further development of this type of rechargeable battery to gain market maturity. Iron-air batteries promise a considerably higher energy density than present-day lithium-ion batteries. Additionally, their main constituent – iron – is an abundant and therefore quite a low-cost material, The Forschungszentrum Jülich scientists are among the driving forces in the renewed research into this concept that was discovered in the 1970s. Schematic of the measuring method: the tip of the in situ electrochemical atomic force microscope scans the surface of the iron electrode. Laser-beam deflection reveals spatial irregularities, which can be compared to each other over the course of several cycles. 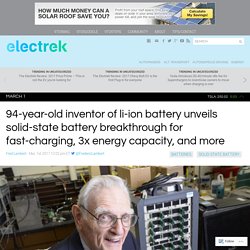 We don’t really like to report on battery “breakthroughs” since most of them are usually just sensationalist statements that don’t really qualify as “breakthroughs” or amount to anything, but it appears that Goodenough’s findings could be good enough to qualify as a breakthrough if you can excuse the bad pun. Solid-state batteries are thought to be a lot safer than common li-ion cells and could have more potential for higher energy density, but we have yet to see a company capable of producing it in large-scale and at an attractive price point. But again, cost and life-cycle are still important problems with this technology.

Goodenough said about the findings (via the University of Texas at Austin): It could also enable cost reductions in mass production. How to Make a Cheaper Version of the Tesla Powerwall. The Tesla Powerwall is a special type of home battery designed to store electricity generated from solar panels or other alternative energy sources. 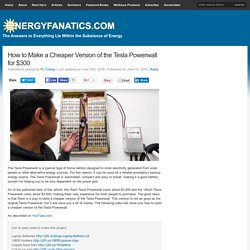 For this reason, it can be used as a reliable emergency backup energy source. The Tesla Powerwall is automated, compact and easy to install, making it a good battery system for helping you to be less dependent on the power grid. As of the published date of this article, the 7kwh Tesla Powerwall costs about $3,000 and the 10kwh Tesla Powerwall costs about $3,500, making them very expensive for most people to purchase. The good news is that there is a way to build a cheaper version of the Tesla Powerwall. This version is not as good as the original Tesla Powerwall, but it will save you a lot of money. An Efficient Halogen-Free Electrolyte for Use in Rechargeable Magnesium Batteries. Scientists Just Figured Out How To Power Batteries With Leaves. Scientists at the University of Maryland were successfully able to use leaves to replace an important component in batteries. 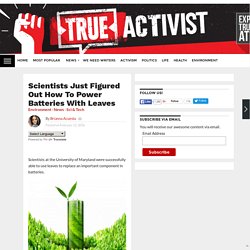 Credit: Inhabitat It’s basically common knowledge that when we dispose of batteries, we’re not supposed to just throw them in our trash casually. Whether or not we all dispose of them properly is another issue. But why are batteries so bad for the environment? In a nutshell, batteries, especially rechargeable ones, aren’t great for the environment when you throw them out because the heavy metals—cadmium, cobalt, and lead—will degrade and release the toxicity into the air, through the topsoil, into the groundwater, and eventually reach us again—except this time we’ll be consuming it.

This is why a team of visiting professors at the University of Maryland decided to look for more sustainable materials to build batteries and hopefully replace the heavy metals. There are many benefits to using leaves. “Leaves are so abundant. Credit: Clip Arts. High-efficiency, low-cost solar cells can be made from recycled car batteries. MIT researchers have developed a simple process for making perovskite solar cells with lead recovered from old car batteries. 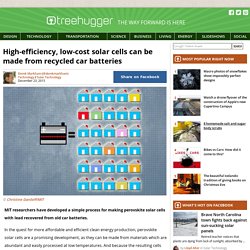 In the quest for more affordable and efficient clean energy production, perovskite solar cells are a promising development, as they can be made from materials which are abundant and easily processed at low temperatures. And because the resulting cells can be thin, flexible, and lightweight, they may lend themselves to being installed on non-traditional solar surfaces, such as windows or building facades. However, perovskite cells all use lead as a key ingredient, and to scale up production of these efficient solar components, additional mining and smelting of lead would be required, which adds to the environmental footprint of their manufacture. Lithium-Air: A Battery Breakthrough Explained. In the quest for smaller, longer-lasting, more powerful batteries, scientists have tried many alternative approaches to battery chemistry. 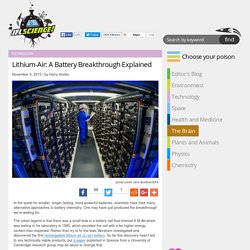 One may have just produced the breakthrough we’re waiting for. The urban legend is that there was a small leak in a battery cell that chemist K M Abraham was testing in his laboratory in 1995, which provided the cell with a far higher energy content than expected. Rather than try to fix the leak, Abraham investigated and discovered the first rechargeable lithium-air (Li-air) battery. Aquion S10 Battery Stack. Based on Aquion’s proprietary Aqueous Hybrid Ion (AHI™) technology, our S-Line products are clean saltwater batteries that outperform and outlast traditional battery chemistries. 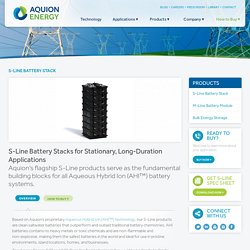 AHI batteries contains no heavy metals or toxic chemicals and are non-flammable and non-explosive, making them the safest batteries in the world and ideal for use in pristine environments, island locations, homes, and businesses. The Aquion Energy S20 and S20-P are the first batteries in the world to be Cradle to Cradle Certified™ Bronze, an esteemed quality mark recognized across industries to provide a continuous improvement pathway toward the development of sustainable products. The batteries are listed on the Cradle to Cradle Certified™ product registry at C2CCertified.org. Aquion Blog. Mja255. Mja255. Organic Flow Batteries: Electrochemical Processes for Energy Technology. Skip to these sections: The Energy Challenge Finding the energy to power human civilization without ruining the environment is the greatest challenge facing humanity this century. 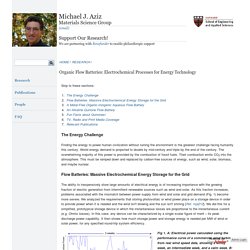 Battery offers new hope to renewables. Solar-powered street lights in Gwadar, Pakistan: Flow batteries could offer many new usesImage: wetlandsofpakistan via Wikimedia Commons FOR IMMEDIATE RELEASEIt sounds like a seminal step towards unlocking the potential of renewables – a research team has high hopes it has found a cheap and effective way of storing huge amounts of energy. 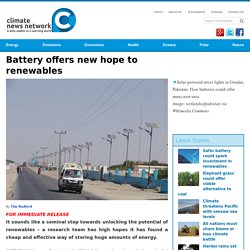 LONDON, 10 January – Scientists in the US think they may be on the track of a new kind of battery technology that could store huge reserves of energy. One of the great problems of renewable energy generators such as photovoltaic cells and wind turbines is that they can’t respond to demand. When the sun is out, nobody needs so much heating and lighting, so the electricity goes to waste. In theory, surplus energy could be saved for hours of darkness or when the winds drop, but at a prohibitive cost.

Alkaline quinone flow battery. Storage of photovoltaic and wind electricity in batteries could solve the mismatch problem between the intermittent supply of these renewable resources and variable demand. 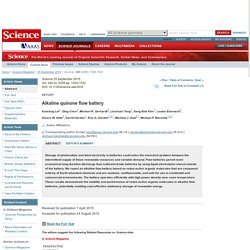 Elon Musk: Tesla Battery Will 'Fundamentally Change the Way the World Uses Energy' Get the Most Important EcoNews Right in Your Inbox Renewable energy sources like solar and wind have always been limited by their intermittency, but now Tesla CEO Elon Musk has unveiled a suite of batteries to store electricity for homes, businesses and utilities, saying a greener grid furthers the company’s mission to provide pollution-free energy, reports Bloomberg. “We’ve obviously been working on building a world-class battery, a super-efficient and affordable way to store energy,” Khobi Brooklyn, a Tesla spokeswoman, told The New York Times. “It’s just that we’ve been putting that battery in cars most of the time.” The Tesla P85D just won the 2015 AAA Best Green Car Award, marking the second year in a row an all electric Tesla Model S has taken top honors from AAA.

But Tesla has been disrupting more than just the auto industry for a while now. “Our goal here is to fundamentally change the way the world uses energy,” Musk told Bloomberg. How to Make a battery at home out of table salt and aluminum. How to make an Aluminum-Air Battery... Super Easy!! Fuji Pigment Unveils Aluminium-Air Battery Rechargeable by Refilling Salty or Normal Water. KAWANISHI, Japan, Jan. 8, 2015 /PRNewswire/ -- Fuji Pigment Co. Ltd. announced on January 8 that it has developed a new type of aluminium-air battery rechargeable by refilling salty or normal water and having a modified structure which ensures longer battery lifetime. Due to fossil fuel depletion and the air pollution arising from its combustion, there is urgent demand for renewable, clean fuel alternatives for our future energy supply.

Although commercialized rechargeable lithium-ion batteries are widely used in mobile phones, laptop computers, and similar electronic devices, their energy density is still insufficient to permit their use in electric vehicles at an industrial level with economical cost. The highest energy storage technologies faced by recent researchers are the metal-air batteries. Several metal-air batteries such as lithium, iron, aluminium, magnesium and zinc-air, etc. have been investigated due to their promising energy densities. Alcoa and Phinergy show electric car with aluminum-air battery. An electric car equipped with an aluminum-air battery system developed by two companies, Phinergy and Alcoa, made its track debut earlier this month. Ultra-fast charging aluminum battery offers safe alternative to conventional batteries. Is aluminium the answer to all our battery prayers? New research by Stanford University into aluminium batteries promises to produce cells that are big enough for a smartphone and charge in just 60 seconds.

The new high-performance aluminium-ion battery is the first using the metal – more commonly found in aircraft and car bodies – to demonstrate long life and fast charging. It does this using a graphite electrode. Previous aluminium batteries have suffered from poor life, failing after 100 recharge cycles. Stanford’s new battery can be recharged around 7,500 times. Typical lithium-ion batteries used in everything from smartphones and laptops to electric cars last around 1,000 recharge cycles.

The existing device is a test, but the bitsy battery performs well. First author Chanyuan Liu, a graduate student in materials science & engineering, says that it can be fully charged in 12 minutes, and it can be recharged thousands of time. Info.aquionenergy.com/hs-fs/hub/147472/file-1817202792-pdf/1_Product_Documentation/AQ-SP-00016_A_Aquion_S20-008F_Product_Specification_Sheet.pdf. News Detail. A Potentially Cheap Way to Store Solar. If solar power is to become a primary source of electricity around the world, we’ll need cheap ways to store energy from the sun when it isn’t shining. A paper published in the journal Science this week reports a major step toward such a system. Researchers have developed a device that cheaply and efficiently converts the energy in sunlight into hydrogen, which can be used as a fuel and is easily stored.

Michael Graetzel, who directs the Laboratory of Photonics and Interfaces at the Ecole Polytechnique in Lausanne, Switzerland, along with colleagues in Korea and Singapore, built a device that uses electricity and catalyst materials to make hydrogen and oxygen from water. This new “water splitter,” as such devices are known, is highly efficient, uses cheap and abundant materials, and is easy to make. The catalysts built on previous work showing that nickel hydroxide is a promising catalyst, and that adding iron could improve it.

More work is needed before the device can be practical. Scientists Announce Development of High-Tech Hemp Battery. BEST BATTERY EVER: All lithium, all the time, plus a dash of carbon nano-stuff. Build a business case: developing custom apps Battery capacity remains a big issue in devices ranging from phones to electric vehicles – and one of the biggest constraints is the materials used to make electrodes.