Why Scots is a language « Wee Ginger Dug. The Scottish Government has recently announced measures to support the Scots language. 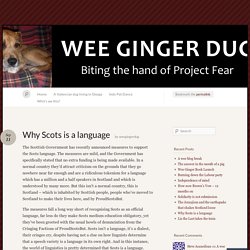 The measures are mild, and the Government has specifically stated that no extra funding is being made available. In a normal country they’d attract criticism on the grounds that they go nowhere near far enough and are a ridiculous tokenism for a language which has a million and a half speakers in Scotland and which is understood by many more. But this isn’t a normal country, this is Scotland – which is inhabited by Scottish people, people who’ve moved to Scotland to make their lives here, and by ProudScotsBut. Oor Wullie. Oor Wullie ®© and associated characters TM©DC Thomson & Co Ltd 2014. 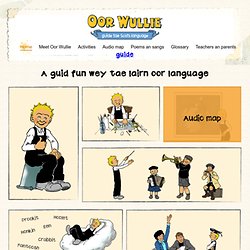 Blog - This train disna stop at Glesga! 17th September 2013 I wis on the train fae Lithgae tae Glesga the ither week an I noticed that mair stations on the Embra – Glesga line haes signs wi Gaelic vairsions o their names. 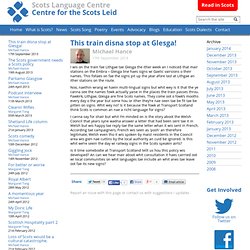 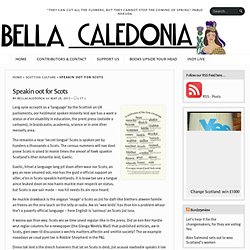 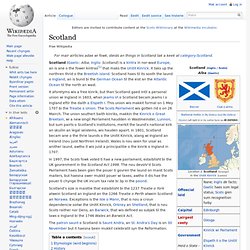 Scotland (Gaelic: Alba, Inglis: Scotland) is a kintra in nor-wast Europe, an is ane o the fower kintras[1] that maks the Unitit Kinrick. It taks up the northren thrid o the Breetish island. Scotland haes til its sooth the laund o Ingland, an is bund bi the German Ocean til the eist an the Atlantic Ocean til the north an wast. It aforetyms wis a free kinrik, but than Scotland gaed intil a personal union wi Ingland in 1603, whan Jeams VI o Scotland becam Jeams I o Ingland eftir the daith o Elspeth I. Dictionary of the Scots Language. History of the Scots language. Scottish Language Dictionaries - Home. Scots leid - Wikipedia. Pittin the Mither Tongue on the Wab! Scots Glossary. Scots Tongue. Scottish Dialect Scottish Pronunciation Scottish Words Scottish Given Names Scottish Sayings Scottish Family Names Scottish Place Names This is an informal guide to the Scots tongue for the benefit of occasional visitors to Scotland or readers of Scottish literature. 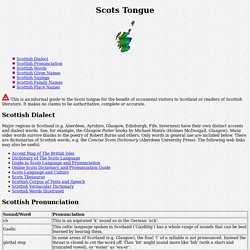 It makes no claims to be authoritative, complete or accurate. Scots - Knowledge of Language. Features - Scots Language. Learning Zone Class Clips - Growing up with the Scots language - English Video. Aye Can - Scots language - Scottish Census 2011. Scottish Review: Scottish Review: Useful Scots words. Casey in pictures Whatever happened to the smirr that was formerly as regular a part of the Scottish summer as midgies? 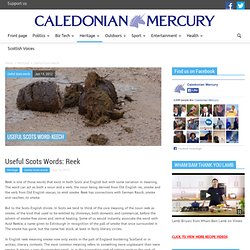 Now the smirr, a Scots word meaning fine rain or drizzle, has been replaced by regular bouts of teeming rain coming down in stair rods reminiscent of monsoons. I suppose climate change will be held responsible for this. Whatever the reason, there seems to have been water, water everywhere for weeks now. Hurdies. 'Yir hurdies like a distant hill' Picture: tjmwatson By Betty Kirkpatrick If you have been living in Scotland for any length of time you will know that this is Burns Night. 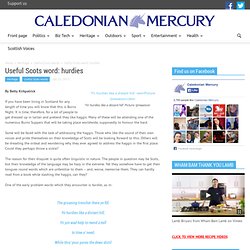 It is time, therefore, for a lot of people to get dressed up in tartan and pretend they like haggis. Many of these will be attending one of the numerous Burns Suppers that will be taking place worldwide, supposedly to honour the bard. Dour. Dour skies. 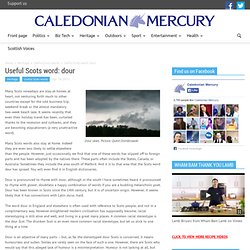 Picture: Quinn Dombrowski Many Scots nowadays are stay-at-homes at heart, not venturing forth much to other countries except for the odd business trip, weekend break or the almost mandatory two-week beach laze. It seems recently that even their holiday travel has been, curtailed thanks to the recession and cutbacks, and they are becoming staycationers (a very unattractive word). Many Scots words also stay at home. Indeed they are even less likely to settle elsewhere than the people. Barrie. Picture: Sarah Reid I was taken back to the late 1980s the other day—not literally, you understand. 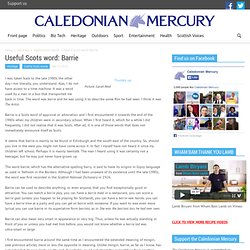 Alas, I do not have access to a time machine. It was a word used by a man in a bus that transported me back in time. The word was barrie and he was using it to describe some film he had seen. Douce. Rothesay – a douce seaside resort? Picture: Anne Burgess By Betty Kirkpatrick Every now and then someone suggests a word to be dealt with in this series of articles and all suggestions are gratefully received. Recently someone suggested the word douce, but I was convinced that I had written about this already. However, an extensive search revealed that I was wrong. Unless the article has fallen down some electronic black hole, douce has not yet been discussed here. Douce, with the alternative spelling douse, is pronounced to rhyme with loose. Dulcis and doux/douce both mean sweet and, when it first came into Scots in the 16th century, douce also meant sweet, in the sense of soft, gentle or pleasant.

Scart. The dreaded cleg Picture: Silversyrpher By Betty Kirkpatrick It has been said frequently, by myself among others, that Scots words are often more descriptive than their English equivalents. Somehow, some of them seem to be better at conveying the spirit of the meaning. Take scart, for example. Wow. English[edit] Pronunciation[edit] enPR: wou, IPA(key): /waʊ̯/Rhymes: -aʊ Etymology[edit] Attested since the 16th century, of Scottish origin. Interjection[edit] wow Synonyms[edit] Word - LOWSE v to loosen, set free. “ LOWSE v to loosen, set free” This verb is related to the English ‘loose’ and to Old Norse ‘leysa’ meaning to loosen. An example from James Grant’s History of Burgh Schools of Scotland (1876) reads: “Striking him upon the mouth with his hand, to the lowsen of his tooth”. Less painful is this quotation from Eliza Logan’s St Johnstoun (1823): “Naething louses the jaw like a soup drink”.

Staying with the mouth, we have a North-East comment on injudicious talk: “Ye’ve tied a knot wi yer tongue at yer teeth winna lowse”. The Bottle Imp. Scots – a language for our time? Printer friendly version (pdf) In this, Scotland's Homecoming year, it is a pertinent time to take stock of the current position of Scots language within contemporary Scottish culture.

Many of this year's celebrations and events will foreground the importance of Scots literary culture (well, we are celebrating Burns' 250th anniversary after all), and this is of course to be welcomed. However, we would also do well to examine the current position of Scots language within popular non-literary culture, and specifically in the media, as providing a useful barometer of whether the fortunes of Scots language are rising or falling. Scots Language Centre's Photostream. - Names in Scots - Places in Scotland. This section of the website is intended to provide a guide to Scots forms of personal and place names. Scots Culture - Names in Scots - Places in Scotland. Parliamo Scots? Descriptive Adjectives.