Robert I 'The Bruce' 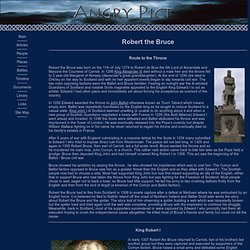 In 1286 King Alexander III died without a male heir and the throne fell to 3 year-old Margaret of Norway (Alexander's great granddaughter). At the end of 1290 she died in Orkney on her way to Scotland and with no heir apparent events began to slip towards civil war. The two main opposing factions were the Balliol and Bruce families. Fearing an outright war the ill-advised Guardians of Scotland and notable Scots magnates appealed to the English King Edward I to act as arbiter. In 1292 Edward awarded the throne to John Balliol otherwise known as Toom Tabard which means empty shirt. After 8 years of war with England culminating in a massive defeat for the Scots in 1304 many submitted to Edward I who tried to impose direct rule from Westminster. King Robert the Bruce. The Bruce family, from Brix in Normandy, were in England before William the Conqueror and were granted land in Galloway by King David I in the 12th century. 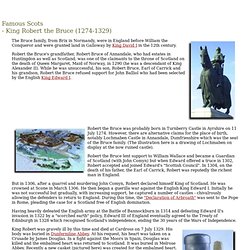 Robert the Bruce's grandfather, Robert Bruce of Annandale, who had estates in Huntingdon as well as Scotland, was one of the claimants to the throne of Scotland on the death of Queen Margaret, Maid of Norway, in 1290 (he was a descendant of King Alexander II). While he was unsuccessful, his son, Robert Bruce, Earl of Carrick and his grandson, Robert the Bruce refused support for John Balliol who had been selected by the English King Edward I. Robert the Bruce was probably born in Turnberry Castle in Ayrshire on 11 July 1274. Robert the Bruce - Wars of Independence. The Bruce was born on 11 July 1274, probably in Turnberry Castle. 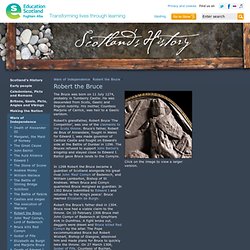 He was descended from Scots, Gaelic and English nobility. His mother, Countess Marjorie of Carrick, was heir to a Gaelic earldom. Robert The Bruce. John the Red Comyn, at the altar of Greyfriars in Dumfries. 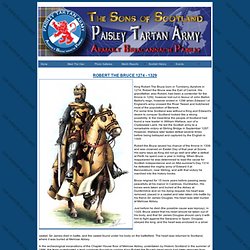 Furthermore, a majority of Scots believed Scotland already had a king, their exiled head of state. King John Balliol had been judged, in 1292, to have the best claim to the kingship by Edward I of England, who dismissed the bid by Bruce's 80-year-old grandfather. For three years, the English master attempted to manipulate the puppet-monarch, who valiantly strove to cut the strings before he was ultimately forced into ignominious surrender, stripped of power, honour, and respect. Edward had then proceeded to conquer Scotland, placing English garrisons in almost all the major castles.

The inspirational flame of resistance kindled by William Wallace was now no more, the hero brutally executed and his nation subjected to the second English conquest in a decade. Comyn's murder provoked civil war with his family and supporters, not to mention powerful allies; John Balliol was his uncle. Little is known of Robert's early life. Battle of Bannockburn - Robert the Bruce at the Battle of Bannockburn. Conflict: The Battle of Bannockburn occurred during the First War of Scottish Independence (1296-1328). 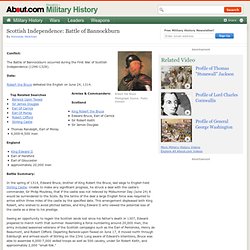 Date: Armies & Commanders: Robert the Bruce - Scotland. Regarded as Scotland’s most successful monarch, Robert the Bruce was a nobleman from the south west, who gained his nation’s crown and won the country’s independence. 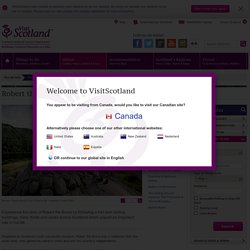 The Robert the Bruce Trail in Dumfries & Galloway takes you back 700 years covering where he grew up, how he was influenced by people and where he forged his skills. The main trail is split into three, with an eastern, central and western section, while there is also a Dumfries Town Trail. On the Eastern Trail you can access the cave in Kirkpatrick Fleming, where legend says that sometime around 1307, after suffering defeat, King Robert went into hiding for three months, and was inspired back into battle by a spider’s relentless effort to spin its web. You can also play a round of golf on Lochmaben Golf Course and see the ruins of a motte and bailey castle built by the Bruces. You can find more information on the Robert the Bruce Trail and download a free leaflet. Medieval and Middle Ages History Timelines - Maps of Medieval History. Robert I of Scotland was a member of the Bruce family. 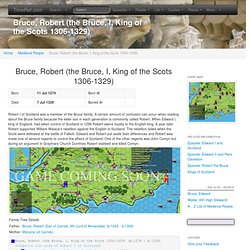 A certain amount of confusion can occur when reading about the Bruce family because the elder son in each generation is commonly called Robert. When Edward I, king of England, had taken control of Scotland in 1296 Robert swore loyalty to the English king. A year later Robert supported William Walace's rebellion against the English in Scotland. Robert the Bruce. Scotland's hero King, the renowned Robert the Bruce, was born into the Scottish nobility on 11th July, 1274, at Turnberry Castle in Carrick, Ayrshire. 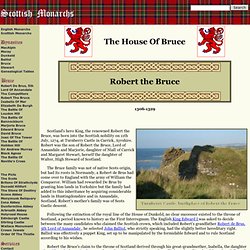 Robert was the son of Robert the Bruce, Lord of Annandale and Marjorie, daughter of Niall of Carrick and Margaret Stewart, herself the daughter of Walter, High Steward of Scotland. The Bruce family was not of native Scots origin, but had its roots in Normandy, a Robert de Brus had come over to England with the army of William the Conqueror. William had rewarded De Brus by granting him lands in Yorkshire but the family had added to this inheritance by acquiring considerable lands in Huntingdonshire and in Annandale, Scotland. Robert's mother's family was of Scots Gaelic descent. Robert the Bruce-2. The Battle of Bannockburn The new English King, the ineffectual Edward II, a pale shadow of his resolute father, responded belatedly by marching his forces into Scotland to meet Robert the Bruce. 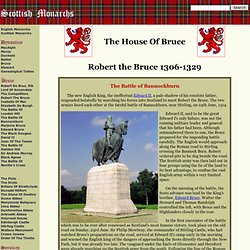 The two armies faced each other at the fateful battle of Bannockburn, near Stirling, on 24th June, 1314. Edward II, said to be the great Edward I's only failure, was not the cunning military leader and general that his father had been. Although outnumbered three to one, the Bruce prepared for the impending battle carefully. The English would approach along the Roman road to Stirling crossing the Bannock Burn. 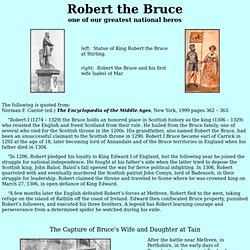 April - Six Guardians are elected to govern Scotland. September - An envoy is sent to King Edward I of England. Robert the Bruce. Robert the Bruce Born: 11-Jul-1274Birthplace: Turnberry, ScotlandDied: 7-Jun-1329Location of death: Cardross, Dumbartonshire, ScotlandCause of death: unspecifiedRemains: Buried, Dunfermline Abbey Gender: MaleRace or Ethnicity: WhiteSexual orientation: StraightOccupation: Royalty Nationality: ScotlandExecutive summary: Secured independence for Scotland Robert I, commonly Robert the Bruce, King of Scotland, was the son of the 7th Robert de Bruce, Earl of Carrick by right of his wife Marjorie, daughter of Niel, or Nigel, Earl of Carrick, and was the eighth in direct male descent from a Norman baron who came to England with William the Conqueror.

The birthplace of Bruce is not certainly known, but was probably Turnberry, his mother's castle on the coast of Ayr. The bond with Lamberton was now sealed by blood, and the confederates lost no time in putting it into execution. DESCENDANTS OF ROBERT THE BRUCE. BRUCE, STEWART, MACDONALD MACKGEHEE, MCGEE Generation No. 1 1. First King of Scotland Robert I1 Bruce was born July 11, 1274, and died June 07, 1329. He married (1) Elizabeth DeBurgh. He married (2) Isabella Of Mar.

Scots national resistance developed into a war of independence in which William Wallace and then Robert Bruce played a leading role. History - Robert the Bruce. King Robert I. The future king, Robert Bruce, was born on the 24th March 1274 in Turnberry. His mother Marjorie was the heiress to the ancient Gaelic Earldom of Carrick, his father had many English ties; he served as keeper of Carlisle Castle and the Bruce family had a home in London, his grandfather ultimately serving Robert Bruce with his belief in his rightful place as the King of Scots, as he was denied on grounds of primogeniture the vacant throne by Edward I of England.

Eventually the old man's claim passed to the grandson, and as King John was stripped of his title, the young Bruce was to eventually realise the family ambition. The years after King John's abdiction were a political minefield for the Scots. Edward I began an English occupation, but famously the Scots led by William Wallace and Andrew Moray rebelled. After Wallace's defeat at Falkirk, Bruce became one of the Guardians of Scotland, but his quarrels with the Comyns and others led to his resignation. Robert the Bruce - Britain Unlimited: British History Online. The Bruces > Robert I. Robert I (r. 1306-1329) Robert the Bruce - a summary. Robert I of Scotland. Roibert I a Briuis, Rìgh Alba (1274 - 1329. Robert I, King of the Scots (11 July 1274 – 7 June 1329) usually known in modern English as Robert the Bruce (Medieval Gaelic: Roibert a Briuis; modern Scottish Gaelic: Raibeart Bruis; Norman French: Robert de Brus or Robert de Bruys) was King of the Scots from 1306 until his death in 1329.

Welcome to the Robert the Bruce Heritage Centre. The Robert the Bruce, Dumfries. Robert the Bruce. Story of King Robert the Bruce 1/6. Cairn To Robert The Bruce - Dalmally. Robert the Bruce Sites. Lost and found: 14th century palace of Robert the Bruce in West Dunbartonshire. Historians and archaeologists claim to have found the remains of King Robert the Bruce's palace, lost for more than 700 years. The discovery is being hailed as one of the most important in decades as it pinpoints the location of a monument many believe is as important to Scotland's history as Edinburgh Castle and Holyrood Palace. Beneath the Pillanflatt in Renton, in a run-down area of West Dunbartonshire, historians claim to have found a number of artefacts and foundations matching descriptions in ancient documents about the location of the king's home. Sections of masonry, plasterwork and mortar have been sent to the Scottish Lime Centre, where tests confirmed that the stone dates from the 14th century and is of a type used in the construction of a cathedral or chapel.

The foundations were uncovered when a building company began digging the field as part of preparations for the construction of 300 houses nearby. Robert the Bruce's heart finds its final resting place - News. To the strains of Border bagpipes and medieval poetry in praise of freedom, Donald Dewar, Secretary of State for Scotland, unveiled a marker stone over the spot at Melrose Abbey where King Robert's heart has been reburied. The shrivelled relic, contained in an ancient casket, has been held in safekeeping in Edinburgh for the last two years following its rediscovery during an archaeological dig. The ceremony took place 684 years to the day after Bruce dispatched the much bigger army of Edward I back to England to "think again" at the Battle of Bannockburn.

Melrose Abbey and the Heart of Robert the Bruce, Melrose Historical Association, Scotland. Melrose Historical Association - Bulletin No. 5 by Dr.Bill Lonie In August,1289 the quiet Spanish town of Teba in Andalusia was invaded by a Scottish force led by the Earl of Selkirk and bearing a one-ton slab of Dumfriesshire marble. Robert The Bruce. King Robert the Bruce - Bruce's Cave. Robert the Bruce Photos - Relatively Risener. Elizabeth de Burgh. Elizabeth de Burgh (c. 1289 – 27 October 1327) was the second wife and the only queen consort of King Robert I of Scotland. Life[edit] She was born in Dunfermline, Fife in Scotland, the daughter of the powerful Richard Óg de Burgh, 2nd Earl of Ulster and his wife Margarite de Burgh (died 1304).

Her father was a close friend of King Edward I of England. On 27 March 1306, Robert and Elizabeth were crowned as King and Queen of Scots at Scone. The coronation took place in defiance of the English claims of suzerainty over Scotland, and the new King sent Elizabeth, with other family members, to Kildrummy Castle for safety under the protection of his brother Nigel (sometimes known as Niall). After the defeat of the Scots at the Battle of Methven on 19 June 1306, Elizabeth had taken her stepdaughter Marjorie and her husband's sisters Mary and Christian to Kildrummy Castle.[1] The English laid siege to the castle containing the royal party.