Nicola Sturgeon. Nicola Sturgeon became an MSP in the first elections to the Scottish Parliament in 1999, becoming the SNP's spokeswoman on justice, and later on education and health. 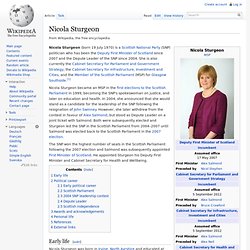 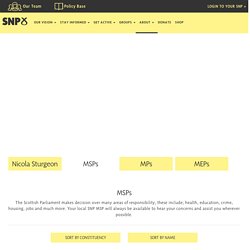 He was born in Montrose before moving to Inverness with his family when he was 2 years old. For the last 30 years he has lived in Contin. Paul was educated at Inverness Royal Academy and at the University of Stirling where he gained a first class honours degree in Psychology and Sociology and a Ph.D. in Social Policy. Your representatives. Profile: Nicola Sturgeon. 5 September 2012Last updated at 16:34 GMT By Mona McAlinden BBC Scotland Nicola Sturgeon was health secretary for five years, and was popular in the role Nicola Sturgeon was born in the North Ayrshire town of Irvine in 1970, and grew up during "the dark days of the Thatcher era," as she later told journalists. By her own admission she came from an ordinary background, with supportive parents who encouraged their daughter to aim high. Nicola Sturgeon - MSPs. Nicola Sturgeon MSP. Profile on Nicola Sturgeon: The human touch - News. Men may be wary of her but women admire her businesslike approach BACK in 2004, Nicola Sturgeon's SNP colleagues unkindly referred to yet another attempt to revamp her image as "Operation Human Being". 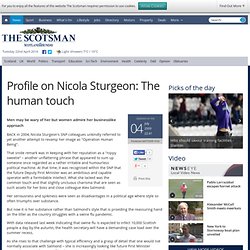 That snide remark was in keeping with her reputation as a "nippy sweetie" – another unflattering phrase that appeared to sum up someone once regarded as a rather irritable and humourless political machine. At that time, it was recognised within the SNP that the future Deputy First Minister was an ambitious and capable operator with a formidable intellect. What she lacked was the common touch and that slightly unctuous charisma that are seen as such assets for her boss and close colleague Alex Salmond. Glasgow SNP - Scottish Independence - Nicola Sturgeon MSP. Nicola Sturgeon (NicolaSturgeon) Nicola Sturgeon. Scottish Election 2011: profile of Glasgow Southside. Nicola Sturgeon and Michael Moore clash in independence debate. Nicola Sturgeon and Michael Moore have clashed in the first major televised debate of the referendum campaign. 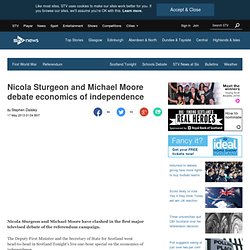 The Deputy First Minister and the Secretary of State for Scotland went head-to-head in Scotland Tonight's live one-hour special on the economics of independence. Ms Sturgeon and Mr Moore fielded questions from presenter and moderator John MacKay before grilling each other in a cross-examination. The two political heavyweights crossed swords on a range of economic, monetary and fiscal questions, covering everything from North Sea oil revenues to the proposed "Sterlingzone" monetary union. STV's political editor Bernard Ponsonby, providing analysis after the debate, judged Ms Sturgeon to have scored a “comfortable points victory”. Fellow analyst Colin Mackay, political editor at Radio Clyde and Radio Forth, agreed that Ms Sturgeon had emerged victorious but added that neither politician had asked crisp, effective questions. However, there was a clear winner in his estimation. BBC Newsnight - Nicola Sturgeon on Scottish Independence. Calum's Blog: Scottish Independence TV Debate: Nicola Sturgeon V.S. Michael Moore. 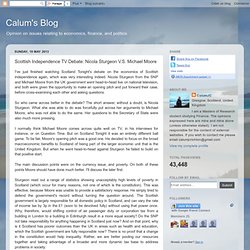 Nicola Sturgeon from the SNP and Michael Moore from the UK government went head-to-head live on national television, and both were given the opportunity to make an opening pitch and put forward their case, before cross-examining each other and asking questions. So who came across better in the debate? The short answer, without a doubt, is Nicola Sturgeon. What she was able to do was forcefully put across her arguments to Michael Moore, who was not able to do the same. Her questions to the Secretary of State were also much more pressing. I normally think Michael Moore comes across quite well on TV, in his interviews for instance, or on Question Time. Your Scotland, Your Referendum. Scotland can help keep UK energy bills down. This week we published a report into the UK’s energy market. The new paper “UK energy policy and Scotland’s contribution to security of supply” shows that there is a much reduced margin between electricity supply and demand – and that this margin is getting tighter – but that Scotland is a key source of energy… Nicola Sturgeon: Scotland Has Every Right to Be Confident About Our Economic Prospects. Scotland is historically a world leader in innovation and enterprise - a nation rich in talent that has, for centuries, been at the heart of global economic innovation. 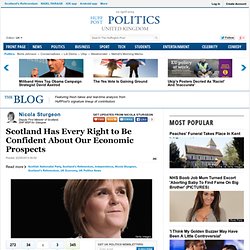 The ingenuity of Scots has helped to shape our modern world. The longstanding entrepreneurial spirit of the Scottish people has produced some of the greatest innovators and thinkers the earth has known. Their ideas have ensured people across the world can watch TV, make telephone calls and use PIN numbers; and commitments to the development of education and science have benefited humanity through the discovery of penicillin, the development of insulin and other medical advances.

More recently, Scotland has established a proud reputation as a leader in green technology, renewable energy, life sciences, quality food and drink and oil and gas. And it's vital that Scotland continues to capitalise on our expertise and skills - our competitive advantage - to secure a more prosperous future for the people who live here.

Nicola Sturgeon's speech in full May 13, 2013. But the division of opinion that is inevitable in a referendum - inevitable in any election - shouldn’t blind us to the fact that, Yes or No, Scotland is one country. 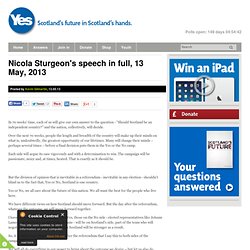 Yes or No, we all care about the future of this nation. Nicola Sturgeon aims at women voters with tax promise. Scotland loves Europe more than England, Nicola Sturgeon tells Brussels. Nicola Sturgeon MSP visits Forth Crossing to Promote Young Women in Construction - Scottish Apprenticeship Week. Deputy First Minister of Scotland, Nicola Sturgeon MSP, was joined by female school pupils from across the Lothians and Fife at the recently opened Forth Replacement Crossing Education and Contact Centre on Thursday 23 May 2013 for an event to promote careers in construction for young women. 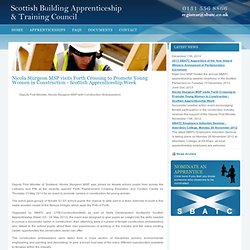 The event gave groups of female S1-S3 school pupils the chance to take part in a team exercise to build a five metre wooden model of the famous bridges which span the Firth of Forth. Organised by SBATC and CITB-ConstructionSkills as part of Skills Decelopment Scotland's 'Scottish Apprenticeship Week' (20 - 24 May 2013), the event was designed to give pupils an insight into the skills needed to pursue a successful career in construction.

Nicola Sturgeon claims there is a ‘natural majority’ for Yes vote on independence - Politics. The SNP would scrap the UK Government’s single universal credit if elected in the event of independence, Deputy First Minister Nicola Sturgeon has announced. In a keynote speech where she claimed there is a “natural majority” for a Yes vote, Nicola Sturgeon said she thinks the new system hits women hardest. Ms Sturgeon pledged to reverse the Westminster changes and pay money directly to individuals rather than the household, something the SNP estimate would benefit around 70,000 people, mostly women, in low-income households across Scotland. The announcement is part of a strategy by the SNP to encourage people to focus on what can be delivered with independence. Ms Sturgeon said: “The new universal credit system discriminates against women.

It undermines the independence of women. “And because it applies a single earnings disregard when people move into work, it reduces the incentive to work for second earners in a household — who will usually be women. Nicola Sturgeon hints at 50p tax rate for Scotland. The levy was introduced in the dying days of the Labour government by Gordon Brown but scrapped last year by Chancellor George Osborne. But yesterday Ms Sturgeon signalled that an independent Scottish Government would re-introduce the tax rate, which critics insist only penalises aspiration and raises little extra income for government coffers.

Earlier this year SNP Finance Secretary John Swinney said he did not foresee any tax rises if Scotland were to separate from the rest of the UK. But some economists and critics have warned taxes would have to increase to fund the burgeoning cost of benefits. Ms Sturgeon’s hint came as she outlined the Scottish Government’s position on sharing the pound in the event of a Yes vote in next year’s referendum. “Retaining the pound will also mean that an independent Scotland will still enjoy the huge advantages that the full fiscal freedom of independence will bring. Nicola Sturgeon - News, views, gossip, pictures, video. Nicola Sturgeon. Nicola Sturgeon. Nicola Sturgeon. Memorial service for Clutha helicopter crash victims Deputy First Minister Nicola Sturgeon, Labour MP Jim Murphy and local council leader Gordon Matheson have joined hundreds of people at a memorial service for the 10 people who died in the Clutha helicopter crash.

Read: Clutha pub survivors describe life after the helicopter crash. News - Nicola Sturgeon In Depth. Nicola Sturgeon spills the beans on her home life as she reveals she's a disaster in the kitchen. NICOLA STURGEON has a confession to make. In a world that delights in the global domination of Jamie, Nigella and John and Greg, she reveals she cannot cook.

Nope, it is husband Peter Murrell who wields the fish slice in their household. It’s not surprising, really, since, as chief executive of the Scottish National Party, he appears to have assembled all the right ingredients so far to create a winning recipe for the SNP. “I don’t cook,” admitted Nicola ruefully. “Dinner would be interesting if I was to try to cook it. There is something immensely satisfying at listening to one of the most successful women in Scotland declare herself less than excellent at something.