Dunfermline. Coordinates: Dunfermline ( i/dʌnˈfɛrmlɨn/; Scots: Dunfaurlin, Scottish Gaelic: Dùn Phàrlain) is a town and former Royal Burgh in Fife, Scotland, on high ground 3 miles (4.8 km) from the northern shore of the Firth of Forth. 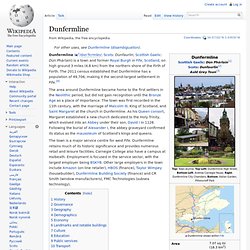 Dunfermline Feature Page on Undiscovered Scotland. Dunfermline is an ancient settlement located in an easily defended site on rising ground a little over two miles north of the River Forth. 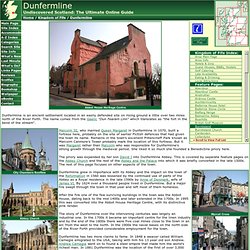 The name comes from the Gaelic "Dun Fearam Linn" which translates as "the fort in the bend of the stream". Malcolm III, who married Queen Margaret in Dunfermline in 1070, built a fortress here, probably on the site of earlier Pictish defences that had given the town its name. Browser Population. Dunfermline. Dunfermline Press. Dunfermline.info The Historic City. Dunfermline Photo Gallery. Visit Dunfermline - Official Visitor Website for Dunfermline. Annals of Dunfermline, Pre History. 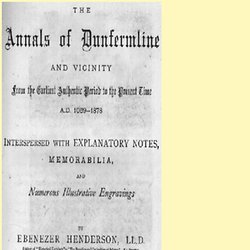 He early displayed a great taste for the scientific study which subsequently gained for him the position of importance which he occupied in scientific and literary circles. He was elected a Fellow of the Royal Astronomical and Royal Antiquarian Societies, while a degree of LL.D was conferred on him by an American college. Fife Council Development Services - c64_DunfermlineTownCentreFS.pdf. Discover Dunfermline Tours - Fife, Scotland. Dunfermline. Visit Dunfermline - Official Visitor Website for Dunfermline. Scottish Screen Archive - Search - Results. Dunfermline Abbey. Dunfermline Abbey is a Church of Scotland Parish Church located in Dunfermline, Fife, Scotland. 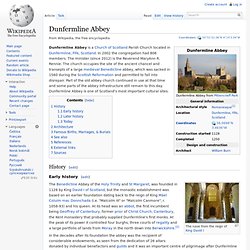 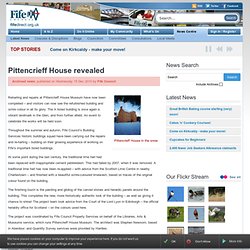 The A listed building is once again a vibrant landmark in the Glen, and from further afield. An event to celebrate the works will be held soon. Throughout the summer and autumn, Fife Council’s Building Services historic buildings squad have been carrying out the repairs and re-harling – building on their growing experience of working on Fife’s important listed buildings. At some point during the last century, the traditional lime harl had been replaced with inappropriate cement pebbledash.

History. You are here: home > history A Short History of The Alhambra Theatre Dunfermline Many local people think of the Alhambra as either a new theatre or ‘the old cinema’ - but in fact it has a long and varied history and has served a variety of different functions. 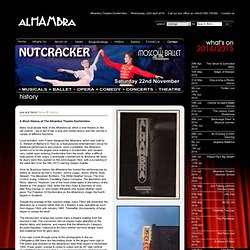 Local architect John Fraser designed the Alhambra, which was built by G. Stewart of Blantyre in 1922 as a dual-purpose entertainment venue for theatrical performance and cinema. All Dates Gigs & Bands Who Ever Played The Kinema Ballroom Dunfermline. Andrew Carnegie. Andrew Carnegie (/kɑrˈneɪɡi/ kar-NAY-gee, but commonly /ˈkɑrnɨɡi/ KAR-nə-gee or /kɑrˈnɛɡi/ kar-NEG-ee;[2] November 25, 1835 – August 11, 1919) was a Scottish American industrialist who led the enormous expansion of the American steel industry in the late 19th century. 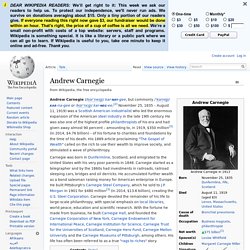 He was also one of the highest profile philanthropists of his era and had given away almost 90 percent – amounting to, in 1919, $350 million[3] (in 2014, $4.76 billion) – of his fortune to charities and foundations by the time of his death. His 1889 article proclaiming "The Gospel of Wealth" called on the rich to use their wealth to improve society, and stimulated a wave of philanthropy. Carnegie was born in Dunfermline, Scotland, and emigrated to the United States with his very poor parents in 1848. Carnegie started as a telegrapher and by the 1860s had investments in railroads, railroad sleeping cars, bridges and oil derricks. 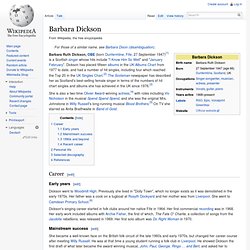 Dickson has placed fifteen albums in the UK Albums Chart from 1977 to date, and had a number of hit singles, including four which reached the Top 20 in the UK Singles Chart.[2] The Scotsman newspaper has described her as Scotland's best-selling female singer in terms of the numbers of hit chart singles and albums she has achieved in the UK since 1976.[3] Career[edit] Early years[edit] Dickson went to Woodmill High.

Previously she lived in "Dolly Town", which no longer exists as it was demolished in the early 1970s. Dickson's singing career started in folk clubs around her native Fife in 1964. Mainstream success[edit] She became a well-known face on the British folk circuit of the late 1960s and early 1970s, but changed her career course after meeting Willy Russell. Barbara Dickson. Ian Anderson. Early life[edit] Ian Anderson was born the youngest of three siblings. 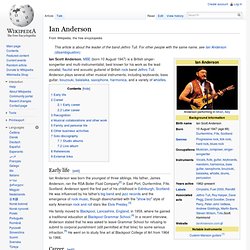 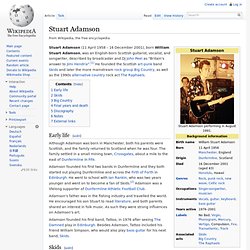 Early life[edit] Although Adamson was born in Manchester, both his parents were Scottish, and the family returned to Scotland when he was four.