Berwickshire. Berwickshire. "BERWICKSHIRE is of an irregular square form, bounded on the N. by East-Lothian; on the E. by the German Ocean; on the S. by the river Tweed, and the English border; and on the W. by the counties of Roxburgh, Peebles and Mid-Lothian. 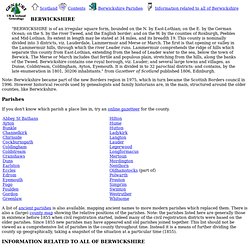 Its extent in length may be stated at 34 miles, and its breadth 19. This county is nominally divided into 3 districts, viz. Lauderdale, Lammermuir and Merse or March. Maps > Ordnance Survey 1:10,560 - Epoch 1 > Scotland - Berwickshire. Berwickshire Coastal Path. Stretching for some 48km from Cockburnspath in the north down to the English Border and Berwick-upon-Tweed, the Berwickshire Coastal Path provides some superb walking. The northern end of the route links up with the Southern Upland Way, whilst the John Muir Way which continues round the coastline of East Lothian is accessible via a short link. The route takes in some dramatic clifftop scenery complete with arches, stacks and crumbling castles. It rounds St Abb's Head, a National Nature Reserve renowned for its birdlife, to reach the attractive fishing village of St Abbs.

Berwickshire Coastal Path - Scottish Borders Council. Old Roads of Scotland. Abbey of St Bathan’s OSA There used to be an old Cistercian nunnery here - this was a cell of South Berwick (i.e. 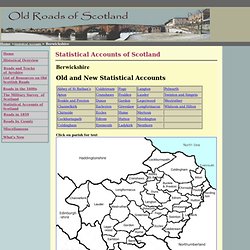 Berwick). NSA There is a legend that the nuns had an underground passage below the Whiteadder over to the church of Strafontane. Roads fairly reasonable but hilly. There is a footbridge over the Whiteadder - there used to be a boat here. Coal is very expensive because of the distance it has to be carried. Ayton OSA. Castles in Berwickshire. Berwickshire News. Berwickshire Civic Society - Berwickshire Civic Society. Berwick-upon-Tweed. Coordinates: Berwick-upon-Tweed i/ˈbɛrɨk əpɒn ˈtwiːd/ is a town in the county of Northumberland and is the northernmost town in England, on the east coast at the mouth of the River Tweed. 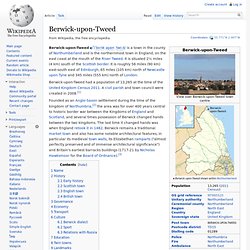 It is situated 2½ miles (4 km) south of the Scottish border. It is roughly 56 miles (90 km) east-south east of Edinburgh, 65 miles (105 km) north of Newcastle upon Tyne and 345 miles (555 km) north of London. Berwick-upon-Tweed had a population of 13,265 at the time of the United Kingdom Census 2011. Name[edit] The name "Berwick" is of Old English origin, and is derived from the term bere-wīc,[4] combining bere, meaning "barley", and wīc, referring to a farm or settlement. History[edit] Early history[edit] Scottish town[edit] While under Scottish control, Berwick was referred to as "South Berwick" in order to differentiate it from the town of North Berwick, East Lothian, near Edinburgh.[12]

Duns. Coordinates: Duns (historically Scots: Dunse) is the county town of the historic county of Berwickshire, within the Scottish Borders. 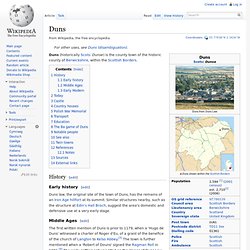 History[edit] Early history[edit] Duns law, the original site of the town of Duns, has the remains of an Iron Age hillfort at its summit. Similar structures nearby, such as the structure at Edin's Hall Broch, suggest the area's domestic and defensive use at a very early stage. Middle Ages[edit] Duns. Eyemouth. Coordinates: The town's name comes from its location at the mouth of the Eye Water. 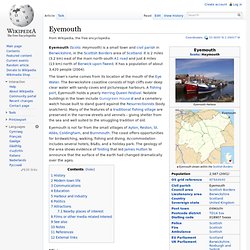 The Berwickshire coastline consists of high cliffs over deep clear water with sandy coves and picturesque harbours. A fishing port, Eyemouth holds a yearly Herring Queen Festival. Notable buildings in the town include Gunsgreen House and a cemetery watch house built to stand guard against the Resurrectionists (body snatchers). 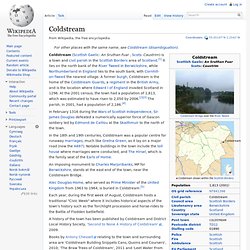 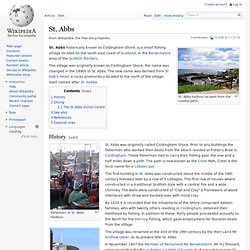 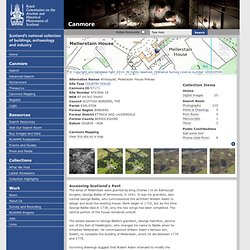 It was his grandson, also named George Baillie, who commissioned the architect William Adam to design and build the existing house. Work began in 1725, but by the time George Baillie died in 1738, only the two wings had been completed. The estate passed to George Baillie's grandson, George Hamilton, second son of the Earl of Haddington, who changed his name to Baillie when he inherited Mellerstain. Surviving drawings suggest that Robert Adam intended to modify the wings designed by his father, but this work was never carried out. John Broadwood & Piano foot pedals.