Avocode 2016 Web Design Report. Infographic: The 2015 Sustainability Leaders - @GlobeScan Blog. 2015 marks nearly two decades worth of the tracking and analysis of the evolution of the sustainability agenda, and of the leaders and institutions most responsible for driving it forward. 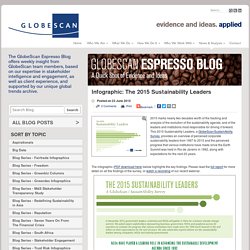 This 2015 Sustainability Leaders, a GlobeScan/SustainAbility Survey, provides an overview of perceived corporate sustainability leaders from 1997 to 2015 and the perceived progress that various institutions have made since the Earth Summit was held in Rio de Janeiro in 1992, along with expectations for the next 20 years. The infographic (PDF download here) below highlights the key findings. Please read the full report for more detail on all the findings of the survey, or watch a recording of our recent webinar. Please feel free to comment on this blog or contact me directly: EventTrack2015 Consumer. Linda Hewson & Daniella Vega of Selfridges in conversation with Monita Rajpal. Global Greenhouse Gas Emissions Data.

On This Page: Global Emissions by Gas At the global scale, the key greenhouse gases emitted by human activities are: Carbon dioxide (CO2): Fossil fuel use is the primary source of CO2. 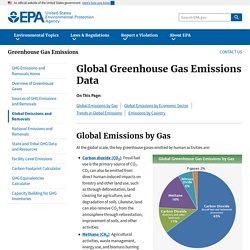 The way in which people use land is also an important source of CO2, especially when it involves deforestation. Shut the Front Door! If We Ate Less Meat, This Is What Would Happen to the Planet. More and more studies are showing that consumption of animal products is one of the largest reasons for some pretty serious environmental issues today. 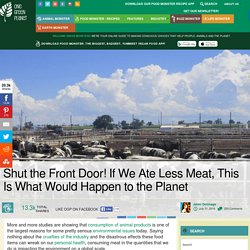 Saying nothing about the cruelties of the industry and the disastrous effects these food items can wreak on our personal health, consuming meat in the quantities that we do is impacting the environment on a global scale. Which makes it seem all the less likely that we, as individuals, can make a difference, right? Veganuary broke all records! Veganuary 2017 broke all records! 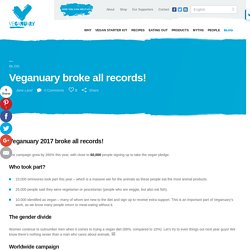 The campaign grew by 260% this year, with close to 60,000 people signing up to take the vegan pledge. Who took part? 23,000 omnivores took part this year – which is a massive win for the animals as these people eat the most animal products.25,000 people said they were vegetarian or pescetarian (people who are veggie, but also eat fish).10,000 identified as vegan – many of whom are new to the diet and sign up to receive extra support. This is an important part of Veganuary’s work, as we know many people return to meat-eating without it. The gender divide. Veganuary - Veganuary 2017 broke all records! 59,500... Person icon. Meat by numbers. 82g The amount of protein the average Briton eats daily, of which 50g is meat, the equivalent of a chicken breast and lamb chop. 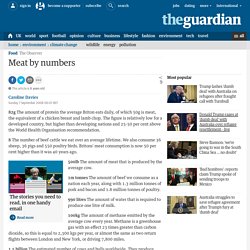 The figure is relatively low for a developed country, but higher than developing nations and 25-50 per cent above the World Health Organisation recommendation. 8 The number of beef cattle we eat over an average lifetime. We also consume 36 sheep, 36 pigs and 550 poultry birds. Britons' meat consumption is now 50 per cent higher than it was 40 years ago. 500lb The amount of meat that is produced by the average cow. UN says eat less meat to curb global warming. People should have one meat-free day a week if they want to make a personal and effective sacrifice that would help tackle climate change, the world's leading authority on global warming has told The Observer Dr Rajendra Pachauri, chair of the United Nations Intergovernmental Panel on Climate Change, which last year earned a joint share of the Nobel Peace Prize, said that people should then go on to reduce their meat consumption even further. 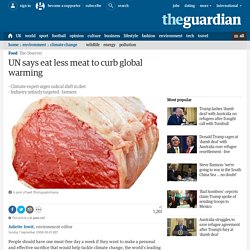 His comments are the most controversial advice yet provided by the panel on how individuals can help tackle global warning. Pachauri, who was re-elected the panel's chairman for a second six-year term last week, said diet change was important because of the huge greenhouse gas emissions and other environmental problems - including habitat destruction - associated with rearing cattle and other animals.

It was relatively easy to change eating habits compared to changing means of transport, he said. It’s Time to Put Meat on the Climate Negotiating Table. A global reduction in meat consumption could bring a quarter of the emissions reductions needed to meet the two-degree target at which dangerous climate change can be avoided. 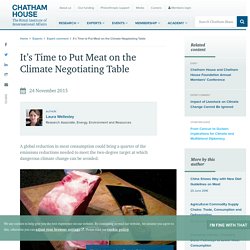 Next month, governments from around the world will come together to agree a deal on how they will bring global greenhouse gas emissions down and avert dangerous climate change. By the time they meet, each country should have laid out its plans for reducing or slowing the growth in national emissions. Over 165 countries have put their intended nationally determined contributions (INDCs) on the table so far.

Covering 93 per cent of global emissions, these INDCs paint a clear picture of where the two weeks of negotiations are likely to land. Americans should eat less meat, but they’re eating more and more. Fairtrade sales in UK rise 14% to £1.78bn. Image copyright AFP Sales of fairtrade products in the UK rose by 14% last year to £1.78bn, new figures have shown. 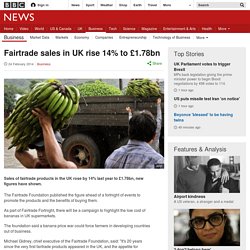 The Fairtrade Foundation published the figure ahead of a fortnight of events to promote the products and the benefits of buying them. SHOPPERS STAND BEHIND FAIRTRADE THROUGH TOUGH GROCERY MARKET. As thousands of people get ready to get behind Fairtrade Fortnight 2016 (Feb 29th- Mar 13th) positive volume growth in four out of the five main Fairtrade food categories – coffee, tea, bananas and cocoa – all sent a strong signal that shoppers and businesses are still standing up for Fairtrade, despite the tough grocery market. 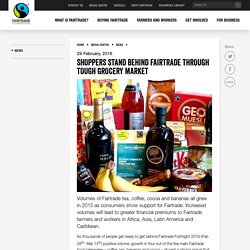 There was also double digit growth in volumes of wine and flowers sold in 2015. Sales of Fairtrade gold sourced from artisanal small-scale gold miners, although still quite small overall, still increased five-fold in 2015. CEO of the Fairtrade Foundation Michael Gidney, said: “These figures show that British shoppers remain committed to Fairtrade, despite the turbulence in the grocery market.

What is the Paris Agreement on Climate Change? What is COP21 – and why does it matter? 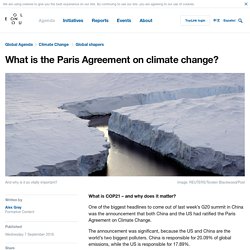 One of the biggest headlines to come out of last week’s G20 summit in China was the announcement that both China and the US had ratified the Paris Agreement on Climate Change. The announcement was significant, because the US and China are the world’s two biggest polluters. China is responsible for 20.09% of global emissions, while the US is responsible for 17.89%. What is the Paris agreement? Color of the Season: Persimmon. Per·sim·mon: an edible fruit that resembles a large tomato and has very sweet flesh // a fiery, burnt orange.. and our color pick for Summer! The season is rapidly approaching, as is the weather here in California; 90-95 degrees already!

We’re lusting over innovative, bold color palettes and are hooked on this statement hue. An Interview with teamLab. Read our interview with Japanese ultra-technologist collective teamLab to find out more about their work process and their plans for a teamLab hotel! TeamLab has really emerged on the Contemporary Art scene with its innovative and technology-focused art installations. Could you tell us a bit about how teamLab was formed as a collective? OMA's Imaginarium hosts lectures in Selfridges' basement.

An events space designed by Rem Koolhaas' OMA has opened in the basement of London department store Selfridges, featuring a circular amphitheatre, vivid green columns and a stripy monochrome floor (+ slideshow). The Imaginarium was designed by OMA as "a school of imagination" and will be used to host a series of lectures, debates and activities as part of the Festival of Imagination taking place over the next six weeks. The space centres around the semi-circular sections of the main amphitheatre, which were built on wheels so that they can be moved into different configurations. Pushed together, they form an intimate enclosure for up to 72 people, but can also be separated to surround a mobile stage.

Moment Factory Turns Nature Installation Into Vibrant, Multi-Sensory Arena. Whether it's giving a tech-touch to Montreal's Red Light District or sparking a landscape of pixels for Nine Inch Nails' recent tour, multimedia studio Moment Factory always blow us away when it comes to turning spaces into hyper-stimulating, multi-sensory installations. Yesterday, the studio published a demo video (above) that showcases its most recent project, Biorama, at the Montreal Biodôme. The installation allows visitors to walk through replicas of four North and South American ecosystems, awash in vibrant tech that mimics nature, including videos and images of the flora and fauna, kaleidoscopic effects produced through endless series' of mirrors, and "organic textures and sounds" culled from the wild. While Biorama doesn't involve any living animals, it's undoubtedly a top notch multimedia experience for inspiring wonder in youngins and oldens alike.

Interactive animations at Retail Design Expo - Dalziel & Pow. Quantum Space / interactive room. Quantum Space / interactive room. California’s Water Restrictions: Conservation Theater. On Wednesday this week, California Governor Jerry Brown issued an executive order instituting the first mandatory water restrictions in response to the state’s historic drought. The first and most significant measure of the executive order is to reduce urban water consumption: The State Water Resources Control Board (Water Board) shall impose restrictions to achieve a statewide 25% reduction in potable urban water usage through February 28, 2016.(1) This is representative of the focus of the executive order. Other water-saving provisions of the order include: How much water is needed to produce food and how much do we waste?

Behance. GetSharedSiteSession?rc=4&redirect= Millennials Side with Science: Climate Change Is Real. 50 Million Millennials Can't Be Wrong (But Will They Vote?) Not Their Parents’ Activism: How Millennials are Using Digital to Take a Stand on Issues They Care About. Portrait of the Millennial as a Young Activist. 1173a5ClimateChange.