Writing a Dystopian Novel: Balancing World-Building with Character-Building. Occasionally I’ve heard science fiction writers complain that in order to create a future world or alternate reality they have to sacrifice characterization; to create a world and to create characters would take too long, be too wordy, and might bore the readers. 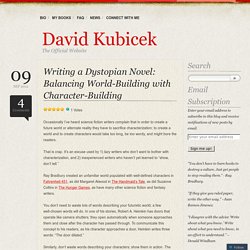 That is crap. It’s an excuse used by 1) lazy writers who don’t want to bother with characterization, and 2) inexperienced writers who haven’t yet learned to “show, don’t tell.” Ray Bradbury created an unfamiliar world populated with well-defined characters in Fahrenheit 451, as did Margaret Atwood in The Handmaid’s Tale, as did Suzanne Collins in The Hunger Games, as have many other science fiction and fantasy writers. You don’t need to waste lots of words describing your futuristic world; a few well-chosen words will do.

In one of his stories, Robert A. Similarly, don’t waste words describing your characters; show them in action. That’s it in a nutshell. Good Luck! Like this: The Laws of Making: Getting Dystopian Societies Right. Reading thuRsday In the bumper crop of current YA dystopian offerings, the societies in which the stories take place tend to cluster around the ends of the spectrum between order and chaos. 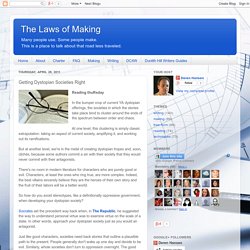 Dystopian World Building Worksheet: Part I. My revision letter and first line edits just arrived for EYE OF THE STORM, my upper-MG dystopian novel coming out with Walker/Bloomsbury in 2012. 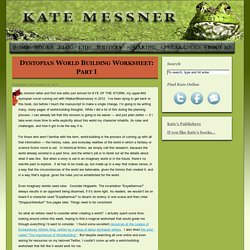 I’ve been dying to get back to this book, but before I touch the manuscript to make a single change, I’m going to be writing many, many pages of world-building thoughts. While I did a lot of this during the planning process, I can already tell that this revision is going to be easier — and just plain better — if I take even more time to write explicitly about this world my character inhabits, its rules and challenges, and how it got to be the way it is. For those who aren’t familiar with the term, world-building is the process of coming up with all that information — the history, rules, and everyday realities of the world in which a fantasy or science fiction novel is set.

Even imaginary worlds need rules. Consider Hogwarts. Dystopia - TV Tropes. Dystopia. Confessions of an Opinionated Book Geek - Writing Tips #164:How Much of My World Do I Build? World Building 101. I love the fantasy and sci-fi genre, so this is something that I wanted to research myself. 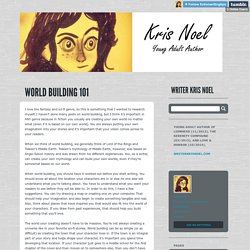 I haven’t done many posts on world building, but I think it’s important in ANY genre because in fiction you usually are creating your own world no matter what (even if it is based on our own world). You are always putting your own imagination into your stories and it’s important that your vision comes across to your readers. When we think of world building, we generally think of Lord of the Rings and Tolkien’s Middle Earth. Berley’s Top 10 World Building Tips for Sci Fi or Fantasy. Like I have mentioned in past blog posts, it took me ten years of writing and collecting rejection letters to get to level I am today. 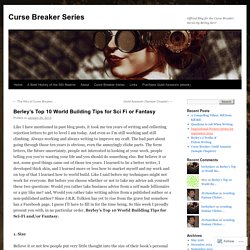 And even so I’m still working and still climbing. Always working and always writing to improve my craft. The bad part about going through those ten years is obvious, even the annoyingly cliche parts. The form letters, the future uncertainty, people not interested in looking at your work, people telling you you’re wasting your life and you should do something else. But believe it or not, some good things came out of those ten years. 7 key Skills to Build the Greatest Fantasy World. Worldbuilding.

World Building. A Heterogeneous World. By Rang Lieu©2003, Rang Lieu "Variety is the spice of life. 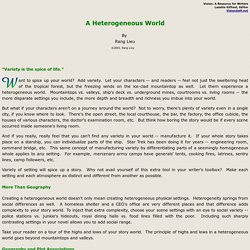 " The Arts in Worldbuilding. By K.R. 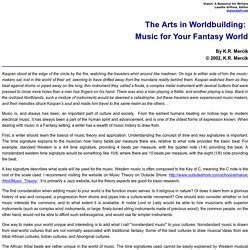 Mercik © 2002, K.R. Mercik Kaspan stood at the edge of the circle by the fire, watching the travelers whirl around like madmen. On logs to either side of him the music-makers sat, lost in the world of their art, seeming to have drifted away from the mundane reality behind them. Kaspan watched them as they beat against drums or piped away on the long, thin instrument they called a floute, a complex metal instrument with several buttons that were pressed to close more holes than a man has fingers on his hand.

Music is, and always has been, an important part of culture and society. First, a writer should learn the basics of music theory and application. A key signature describes what scale will be used for the music. The first consideration when adding music to your world is the function music serves. Fantasy. Holly Lisle's Vision Fantasy By Jeff Reeds © 2002, Jeff Reeds I have a problem with animals. 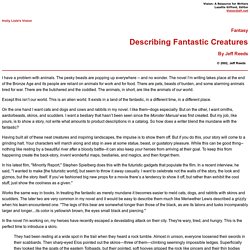 The pesky beasts are popping up everywhere -- and no wonder. Weather and Worldbuilding 101. Holly Lisle's Vision By Karen Pon © 2001, By Karen Pon For stories set on our own world in times past and present, a little research is usually all that’s needed to determine typical weather patterns for a given time and place. 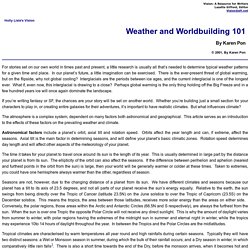 In our planet’s future, a little imagination can be exercised. There is the ever-present threat of global warming, but on the flipside, why not global cooling? If you’re writing fantasy or SF, the chances are your story will be set on another world. The atmosphere is a complex system, dependent on many factors both astronomical and geographical. Creating Holidays for Fictional Cultures. With Christmas one day behind us, the New Year a few days ahead, and being right in the middle of Boxing Day (in the UK and Canada), I’ve been thinking about the significance of holidays around our little planet. 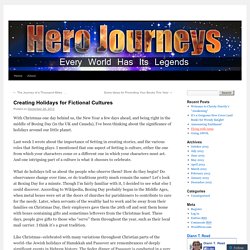 Last week I wrote about the importance of Setting in creating stories, and the various roles that Setting plays. I mentioned that one aspect of Setting is culture, either the one from which your characters come or a different one in which your characters must act. And one intriguing part of a culture is what it chooses to celebrate. What do holidays tell us about the people who observe them? How do they begin? Creating Fictional Holidays. Holly Lisle's Vision By Robert A. Sloan © 2001, By Robert A. Using Language in Fiction. When we consider the process of language creation and evolution, we are, in the West, inevitably drawn to the Babel story of the Bible.

Due to this cultural conditioning, it seems almost heretical to propose that there could be anything other than the natural state of a multilingual world. However, when we read fiction, for example a fantasy novel, we often find that all the characters, after traversing great distances over elegant maps in the front of the books, still are able to speak without any difficulty to the locals. We are going to assume for the sake of argument that using a natural language is no good for your characters, as of course aliens from Wtlond and Golden Knights from Dalinia are unlikely to speak French.

Most likely your piece of fiction will be taking place in a world where languages are not as we know them. Some authors are drawn to language creation, the most famous example being J.R.R. LangMaker Website Richard Kennaway’s Constructed Languages List. Building the Perfect Beast. Sarah Jane Elliott ©2001, Sarah Jane Elliott There are 1.5 million identified species on this great and wonderful planet of ours, representing only a fraction of the species actually out there.

Current evidence shows that the total number may be anywhere from ten to thirty million. Matching Your Money to Your World. There has been discussion in many places concerning money in speculative fiction. Many people adhere to the common currencies of gold, silver, and bronze. Others, especially science fiction writers, will use the ubiquitous ‘credit’ system.

Each of these has its place, but any system must be matched to the appropriate world atmosphere. If your world is very young, doesn’t have established governments, and survives on individual farming and small towns, you will likely want to rely on a barter system. It is not an easy system to deal with from a writing standpoint because you will need to make the trading difficult in order to capture the flavor of that system. Making Histories. One way to coax the reader into accepting the setting of your story as genuine is to build your world on a convincing history. In SF, this generally takes the form of a future history--of Earth, other planets, or both. The General Character of History Though he's not without his flaws, one of my favorite historians is Arnold Toynbee, author of the ten-volume Study of History, and I'm starting off with one of his major conclusions: that history is accidental and chaotic.

This follows from his observation that environment--physical and intellectual--is the key force behind shaping civilizations, as opposed to race or biology. Biology is a limiting factor on culture--and therefore on civilizations, which are born from cultures--but environment is far more important. So, forget the idea of any event being inevitable, and watch out for extrapolating too faithfully from contemporary trends; the future isn't bound to realize our expectations.

World Weaving - A Question for my Followers: Let Me Explain to You a Thing, Water Geography. Worldbuilding. The Rules of Quick and Dirty Worldbuilding. World Building.docx. Fantasy World Generator. 30 Days of WorldBuilding. By popular demand, you can now download the Magical WorldBuilder Guide in three easy-to-carry (non-DRM) formats: PDF for printing out at home or reading on a computerePub for use with many fine ereader devicesMOBI for use with Kindles and MobiPocket software.As of 2007, The world-builder exercises are licensed under a Creative Commons license to help you in deciding whether you can translate (yes, with credit back), distribute to your writing group (yes, with credit), sell (not without permission), reprint (yes, for non-commercial purposes), or mirror (yes, with credit back) this useful guide!

Chaotic Shiny - Writing and RPG-Related Generators. Main Page - Educated Worldbuilding. Fantasy Worldbuilding Questions. FAQS About Worldbuilding. How important is worldbuilding? How important is your story to you? Fantasy World Building Worksheet. Tutorial - 10 Steps to Creating Realistic Fantasy Animals. By Ashley Lange Why do writers write? Because it isn't there. Tutorial - Creating Fantasy and Science Fiction Worlds. Tutorial - Creating Fantasy and Science Fiction Worlds. By Michael James Liljenberg. By the seventh day God had finished the work he had been doing; so on the seventh day he rested from all His work. Tutorial - Creating Fantasy and Science Fiction Worlds. By Michael James Liljenberg. Then God said, 'Let us make man in our image, in our likeness, and let them rule over the fish of the sea and the birds of the air, over the livestock, over all the earth, and over all the creatures that move along the ground.'So God created man in his own image,In the image of God he created him;Male and female he created them . . .God saw all that he had made, and it was very good.

Tutorial - Creating Fantasy and Science Fiction Worlds. By Michael James Liljenberg. Then God said, 'Let us make man in our image, in our likeness, and let them rule over the fish of the sea and the birds of the air, over the livestock, over all the earth, and over all the creatures that move along the ground.' So God created man in his own image, In the image of God he created him;

Spaceships, Airships, & Other Fantastic Crafts: Things To Think Out & Consider. Keeping Magic From Taking Over Your Story. So You Wanna Mix Science And Magic? Worldbuilding - Phlebotinum-Development Questions - questions to ask yourself about your new gadget, spell, superweapon, or whatever else. Creating & Writing Fictional Organizations.