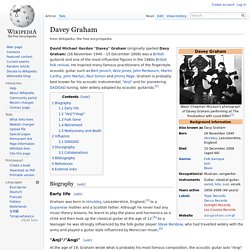 Although he never had any music theory lessons, he learnt to play the piano and harmonica as a child and then took up the classical guitar at the age of 12.[4] As a teenager he was strongly influenced by the folk guitar player Steve Benbow, who had travelled widely with the army and played a guitar style influenced by Moroccan music.[5] "Anji"/"Angi"[edit] Anji soon became a rite of passage for many acoustic finger-style guitarists. Folk fame[edit] His continuous touring of the world as a beat mystic traveller, picking up and then recording different styles of music for the guitar, has resulted in many musicians crediting him with founding world music.[6] However, though Graham recorded in a variety of genres and loved to play the oud, he was no purist, absorbing all his influences into his own ever-expanding conception of the possibilities of guitar music.

Claudio Arrau Beethoven Moonlight Sonata ) The deep dark woods jubilee full album. The War On Drugs - Lost in the Dream Full Album + Download link. The War On Drugs - An Ocean In Between The Waves. BOB DYLAN & JOHNNY CASH - Girl From The North Country. Bob Dylan's The Bootleg Series Vol 10 Another Self Portrait 1969 1971) The Band- Orange Juice Blues (Blues For Breakfast) Jonny Greenwood - "Bodysong" (complete soundtrack) SHIZHANÉ'É ~ NAVAJO CIRCLE DANCE SONG 1957. » Theses on Punk Rock by John Maus1. After Pisaro2 after Badiou3 The only workable name for the musical4 truth procedure that begins with Elvis Presley, and continues through the Beatles, the Sex Pistols, et al.5, is “punk rock.” 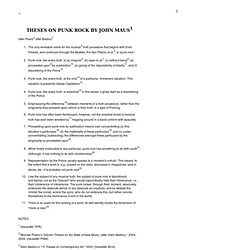 Punk rock, like every truth, is (a) singular6, (b) open to all7, (c) without being8, (d) proceeded upon9 by subtraction10, (e) giving of the impossibility of totality11, and (f) disordering of the Police12. Punk rock, like every truth, is the void13 of a particular, immanent, situation. This situation is presently Global Capitalism14. Punk rock, like every truth, is anarchist15 in this sense: it gives itself as a disordering of the Police. 1 (Hereafter TPR). 2 Michael Pisaro’s “Eleven Theses on the State of New Music, (after Alain Badiou),” 2004, 2006, (hereafter PNM). 3 Alain Badiou’s “15 Theses on Contemporary Art,” 2003, (hereafter BCA). 4 Punk rock, insofar as it is considered here, is a musical truth, i.e., a truth of the singular way of listening we call “music.” SoundCloud. Animal Collective- De Soto De Son. Maria Konnikova Archives - The New Yorker. Our privacy promise The New Yorker's Strongbox is designed to let you communicate with our writers and editors with greater anonymity and security than afforded by conventional e-mail. 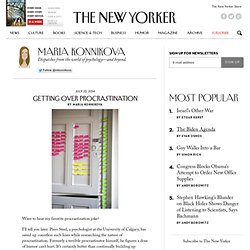 When you visit or use our public Strongbox server at The New Yorker and our parent company, Condé Nast, will not record your I.P. address or information about your browser, computer, or operating system, nor will we embed third-party content or deliver cookies to your browser. Strongbox servers are under the physical control of The New Yorker and Condé Nast. Strongbox is designed to be accessed only through a “hidden service” on the Tor anonymity network, which is set up to conceal both your online and physical location from us and to offer full end-to-end encryption for your communications with us. Paradise Radio 106 - Internet Radio. Grouper - Alien Observer. Jonathan Richman & Julia Sweeney - Just Because I'm Irish. Lower Dens - Tea Lights. John Fahey - Impressions Of Susan. VA-Diggin' Deeper 200 Legendary Blues Treasures-Vol 1. Turn Up the Vinyl with Morwenna Cobbold. Morwenna Lytton Cobbold is a Model, DJ and photographer. 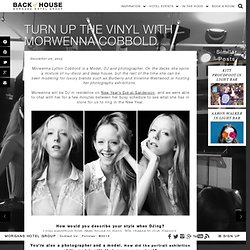 On the decks she spins a mixture of nu-disco and deep house, but the rest of the time she can be seen modeling for luxury brands such as Burberry and Vivienne Westwood or hosting her photography exhibitions. Morwenna will be DJ in residence on New Year’s Eve at Sanderson, and we were able to chat with her for a few minutes between her busy schedule to see what she has in store for us to ring in the New Year. How would you describe your style when DJing? I play everything from deep house to disco, 90s cheese to club classics. You’re also a photographer and a model. I’ve been working on this series of portraits since I was at university. If you had the opportunity to photograph a celebrity, who would you choose and why? I’d love to shoot a portrait of Josh Homme from Queens Of the Stone Age. What do you have prepared for us on NYE? John and Beverly Maryn John the Baptist. Musica.