How Archaeology Influenced Agatha Christie. How Textbooks Can Teach Different Versions Of History : NPR Ed : NPR. This summer there's been an intense debate surrounding the Confederate flag and the legacy of slavery in this country. 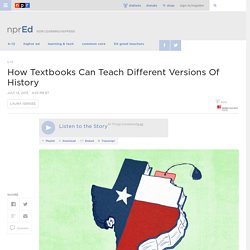 In Texas that debate revolves around new textbooks that 5 million students will use when the school year begins next month. The question is, are students getting a full and accurate picture of the past? Eleventh-grade U.S. history teacher Samantha Manchac is concerned about the new materials and is already drawing up her lesson plans for the coming year. A Global Museum: How Flipboard Can Help Bring a World of Ancient Wonders to Classrooms Half a World Away. Educators / May 20, 2015 Being born and raised in Australia, it was easy for me to feel isolated from the rest of the world, especially as I developed a love of history as a child. 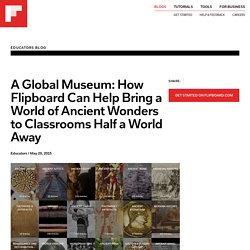 I recall my disappointment when I learnt that the lands of the Romans, Incas and Medieval Europe were on the other side of the world from where I lived and that being able to see them firsthand was not really an option. Fast forward 20 years and I was elated as I finally got to see the things I had only ever dreamt about: I stood reverentially next to the Theatre of Pompey in Rome where Julius Caesar was murdered, marveled at the famous trilingual Rosetta Stone behind its glass case in the British Museum in London, and was in awe of an entire Egyptian temple which had been dismantled and reconstructed inside the Metropolitan Museum of Art in New York.

Since I am also a high school history teacher, I wished I could pass my euphoria onto my history students back in Australia. Why the ancient art of poisoning appears to be making a killer comeback. Coolest Archaeological Discoveries of 2014. Thanks to the careful work of archaeologists, we learned more in the past year about Stonehenge's hidden monuments, Richard III's gruesome death and King Tut's mummified erection. 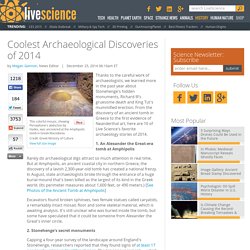 From the discovery of an ancient tomb in Greece to the first evidence of Neanderthal art, here are 10 of Live Science's favorite archaeology stories of 2014. 1. An Alexander the Great-era tomb at Amphipolis Rarely do archaeological digs attract so much attention in real time. But at Amphipolis, an ancient coastal city in northern Greece, the discovery of a lavish 2,300-year-old tomb has created a national frenzy. Historians gloss over too many unpalatable truths, Antony Beevor says. Voices of the Sandhills: Archaeology. Archaeological sites are fragile, non-renewable resources. 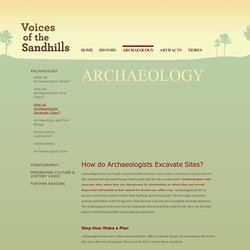 Once a site is excavated, it is gone forever. The artifacts and soil cannot be put back in place and the site reconstructed. Archaeologists only excavate sites when they are threatened by destruction or when they can reveal important information that cannot be found any other way. Archaeologists prefer to preserve our finite resources rather than dig them up for no purpose.

The five large excavation projects undertaken at Fort Bragg were done because each site was in jeopardy of being destroyed. Step One: Make a Plan. HowStuffWorks "What's the archaeological method?" In the past, treasure hunting was done with little regard for historical or archaeological purpose -- it was done for profit and novelty. 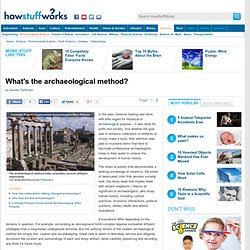 And whether the goal was to enhance collections of artifacts or simply make a buck, little attention was paid to mundane items that tend to fascinate professional archaeologists today in their quest to unravel the development of human history. The shard of pottery that demonstrates a working knowledge of ceramics, the shred of desiccated cloth that denotes societal rank, the dusty bead that implies trade with distant neighbors -- they're all significant to archaeologists, who study human history, including cultural practices, economic interactions, political systems, dietary habits and artistic inclinations. Excavations differ depending on the remains in question. Archaeological Methods. Laboratory Analysis Once the artifacts are excavated they are taken to an archaeological laboratory. 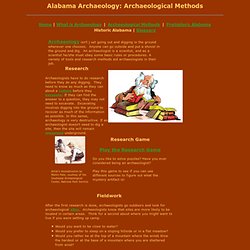 HowStuffWorks "An Archaeologist's Work: Fieldwork and Excavation" It's easy to imagine the archaeologist in the field -- a modern-day adventurer discovering the mysteries of the past before whisking off to a new, even more fascinating site. 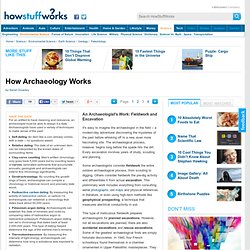 The archaeological process, however, begins long before the spade hits the dirt. Every excavation involves years of study, scouting and planning. Some archaeologists consider fieldwork the entire outdoor archaeological process, from scouting to digging. Others consider fieldwork the pre-dig activity and differentiate it from actual excavation. This preliminary work includes everything from consulting aerial photographs, old maps and physical references in literature, or even using high-tech methods like geophysical prospecting, a technique that measures electrical conductivity in soil. This type of meticulous fieldwork prepares archaeologists for planned excavations. Sometimes, accidental finds become rescue excavations.

HowStuffWorks "How Archaeology Works" An archaeologist searches for both treasures and trash -- the signs of our earlies­t ancestors, a lost civilization or our recent past. 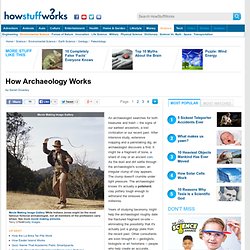 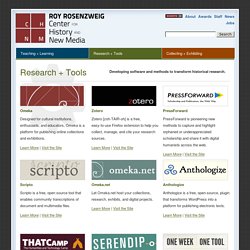