10 Social Media Tips to Improve Internal Communication. When most business leaders think of social media, they think of how it can help them communicate with clients and potential clients. 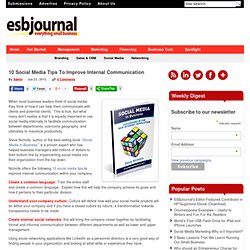 Avoid these key mistakes for enterprise collaboration initiative success. Communication within a company used to be simple: You walked down the hallway to talk to a co-worker, picked up the phone or banged out an email. 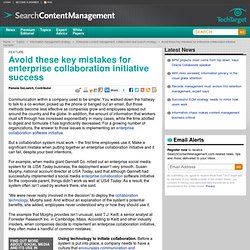 But those methods become less effective as companies grow and employees spread out around the country and the globe. In addition, the amount of information that workers must sift through has increased exponentially in many cases, while the time allotted to digest and formulate it has significantly decreased. For a growing number of organizations, the answer to those issues is implementing an enterprise collaboration software initiative.

But a collaboration system must work -- the first time employees use it. Make a significant mistake when putting together an enterprise collaboration initiative and it can fail, despite your best intentions. For example, when media giant Gannett Co. rolled out an enterprise social media system for its USA Today business, the deployment wasn’t very smooth. Socializing the enterprise is serious business. Enterprise communication software is in the thick of its heyday at the moment. 9 Ways to Engage Your Employees on Pinterest. Social media is all about user/customer interaction — that much we know. 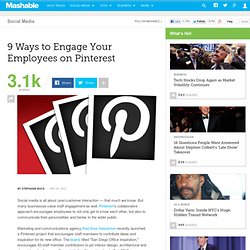 But many businesses value staff engagement as well. Pinterest's collaborative approach encourages employees to not only get to know each other, but also to communicate their personalities and tastes to the wider public. Marketing and communications agency Red Door Interactive recently launched a Pinterest project that encourages staff members to contribute ideas and inspiration for its new office.

The board, titled "San Diego Office Inspiration," encourages 63 staff member contributors to pin interior design, architectural and decor ideas for the new office, which they'll be relocating to Oct. 2012. Red Door's director of social media, Crosby Noricks, is an early adopter of Pinterest, and was even featured on the social network's blog back in Sept. 2011. SEE ALSO: Why Is Pinterest So Addictive? And the sky's the limit when it comes to inspiration.

The end of privacy in the digital workplace. The development of digital monitoring and surveillance has increased dramatically over the past decade and pervades all aspects of everyday life, to the extent that most people don’t even notice it. 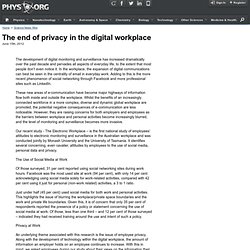 In the workplace, the expansion of digital communications can best be seen in the centrality of email in everyday work. Adding to this is the more recent phenomenon of social networking through Facebook and more professional sites such as LinkedIn. These new areas of e-communication have become major highways of information flow both inside and outside the workplace.

Whilst the benefits of an increasingly connected workforce in a more complex, diverse and dynamic global workplace are promoted, the potential negative consequences of e-communication are less noticeable. However, they are raising concerns for both employers and employees as the barriers between workplace and personal activities become increasingly blurred, and the level of monitoring and surveillance becomes more invasive. 5 Mistakes to Avoid When Implementing Collaboration Tools. Popular Today in Business: All Popular Articles Remember the old cliché that hindsight is always 20/20? 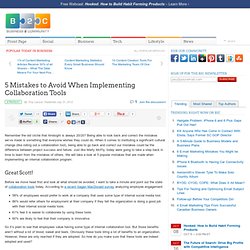 Being able to look back and correct the mistakes we’ve made is something that everyone wishes they could do. When it comes to instituting a significant cultural change (like rolling out a collaboration tool), being able to go back and correct our mistakes could be the difference between project success and failure. Just like Marty McFly, today were going to take a step back in time to learn from the mistakes of others. We will take a look at 5 popular mistakes that are made when implementing an internal collaboration program. 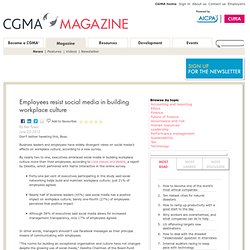 Business leaders and employees have widely divergent views on social media’s effects on workplace culture, according to a new survey. By nearly two to one, executives embraced social media in building workplace culture more than their employees, according to Core Values and Beliefs, a report by Deloitte, which partnered with Harris Interactive in the online survey. Employee Reaction to Internal Social Media: Meh. Deloitte study shows management like social more than employees Email, Facebook, Twitter, instant messaging, text messages, corporate intranets. 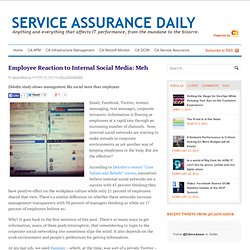 Information is flowing at employees at a rapid rate through an increasing number of channels. Now, internal social networks are starting to make inroads in corporate environments as yet another way of keeping employees in the loop. But are the effective? According to Deloitte’s recent “Core Values and Beliefs” survey, executives believe internal social networks are a success with 45 percent thinking they have positive effect on the workplace culture while only 21 percent of employees shared that view. Why? At my last job, we used Yammer – which, at the time, was sort of a private Twitter – as an internal network, but it didn’t quite seem to take hold as email, instant messaging and in-person communications were king.

I like Chatter for finding information that is relevant but not necessarily urgent for my job. About Jason Meserve.