Online assignments and assessments. Capture Rich Media Learning Outcomes. Enough with the Late Penalties! Here is my issue with Late Penalties being applied to student work. 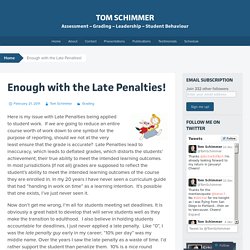 If we are going to reduce an entire course worth of work down to one symbol for the purpose of reporting, should we not at the very least ensure that the grade is accurate? Late Penalties lead to inaccuracy, which leads to deflated grades, which distorts the students’ achievement; their true ability to meet the intended learning outcomes.

In most jurisdictions (if not all) grades are supposed to reflect the student’s ability to meet the intended learning outcomes of the course they are enrolled in. In my 20 years I have never seen a curriculum guide that had “handing in work on time” as a learning intention. It’s possible that one exists, I’ve just never seen it. Now don’t get me wrong, I’m all for students meeting set deadlines. Here is my position: Students should be graded on the quality of their work (their ability to meet the desired learning targets) rather than how punctual the assignment is. Ken O’Connor writes: Why Schools Need to Scrap the No-Zero Policy. Photography by iStockphoto.com No parent wants to see their child get a zero on an uncompleted assignment or missed test—but would you really want your child to get a pass? 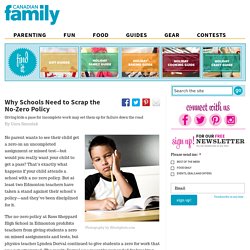 That’s exactly what happens if your child attends a school with a no-zero policy. But at least two Edmonton teachers have taken a stand against their school’s policy—and they’ve been disciplined for it. The no-zero policy at Ross Sheppard High School in Edmonton prohibits teachers from giving students a zero on missed assignments and tests, but physics teacher Lynden Dorval continued to give students a zero for work that was not attempted.

The result: Dorval was recently suspended for breaking the school’s no-zero policy. Since Dorval’s suspension, another teacher at the school, Mike Tachynski, has spoken out on behalf of Dorval at Edmonton Public School Board meeting, and has said he is also facing disciplinary action because he too is now giving zeros for missed work, according to a CBC article. What do you think? Why kids need to fail to succeed in school. How much influence do parents really have on their children’s success in life? 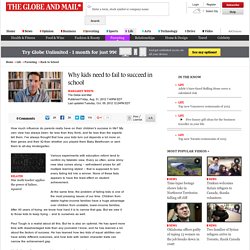 My own view has always been: far less than they think, and far less than the experts tell them. I’ve always thought that how your kids turn out depends a lot more on their genes and their IQ than whether you played them Baby Beethoven or sent them to all-day kindergarten. Various experiments with education reform tend to confirm my fatalistic view. Every so often, some shiny new idea comes along – self-esteem! Prizes for all!

At the same time, the problem of failing kids is one of the most pressing issues of our time. Paul Tough is a realist about all this. His findings offer some surprising answers to the questions every parent asks: How much do test scores really matter? Mr. You argue, quite convincingly, I think, that IQ is not destiny, far from it. Yes, it’s a psychological category discovered by Angela Duckworth at the University of Pennsylvania. Yes, and I would add passion. Why some schools are giving letter grades a fail. Krista Wolfram credits an innovative new assessment program with helping catch her daughter’s difficulties in school early. 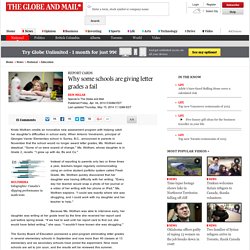 When Antonio Vendramin, principal of Georges Vanier Elementary school in Surrey, B.C., announced to parents in November that the school would no longer award letter grades, Ms. Wolfram was skeptical. “Some of us were scared of change,” Ms. Wolfram, whose daughter is in Grade 2, recalls. “I grew up with As, Bs and Cs.” Instead of reporting to parents only two or three times a year, teachers began regularly communicating using an online student portfolio system called Fresh Grade. Because Ms. The Surrey Board of Education pioneered a pilot program eliminating letter grades in several elementary schools in September and now more than 40 classes at 13 elementary and six secondary schools have joined the experiment.

The Surrey school district is not alone. In response, school boards in Canada are implementing new approaches to assessment. A Late Work Policy That Supports Learning. In my first fifteen years of teaching, I struggled to develop an effective, fair and student-learning centered late work policy. 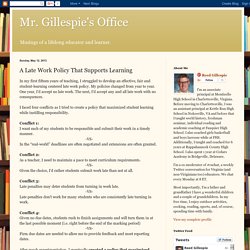 My policies changed from year to year. One year, I’d accept no late work. The next, I’d accept any and all late work with no consequences. I faced four conflicts as I tried to create a policy that maximized student learning while instilling responsibility. Conflict 1: I want each of my students to be responsible and submit their work in a timely manner. In the “real-world” deadlines are often negotiated and extensions are often granted. Conflict 2: As a teacher, I need to maintain a pace to meet curriculum requirements.

Given the choice, I’d rather students submit work late than not at all. Conflict 3: