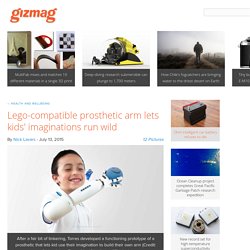 His IKO Creative Prosthetic System is aimed at unleashing the creative expression of those with missing limbs, and to do so he's enlisting every child's favorite building blocks. The result is an artificial limb where kids can swap robotic grippers for laser-shooting spaceships whenever the opportunity arises. Amputees are all too common in Torres' homeland, where civil war has wreaked havoc and seen the huge buildup of landmines over the last half a century. 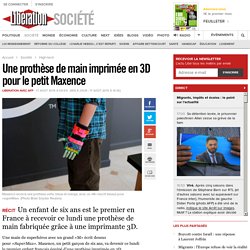 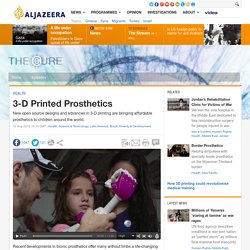 Yet for most people, especially those in the developing world, these advanced prosthetics are financially out of reach and many are left with few or no options. e-NABLE is an innovative organisation that gets volunteers across the world to create free prosthetic hands for children by using 3-D printers. The prosthetic hands work for children who are missing fingers or arms below the elbow, and fit onto the remaining arm. The hands do not have electrical parts, and instead use an elastic tensioning system which allows the hand to flex and grip. The project focuses on children as they grow out of prosthetics extremely quickly. The open source nature of the e-NABLE designs also means that engineers and designers across the world are able to modify and adapt them so the prosthetics are always improving. Source: Al Jazeera. Project Daniel - Not Impossible's 3D printing arms for children of war-torn Sudan. Jan.7, 2014 Not Impossible, LLC, a California media and technology company, is using 3D printers to provide hands and arms for amputees in South Sudan and the war-torn Nuba Mountains. 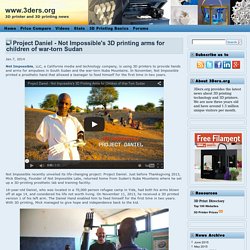 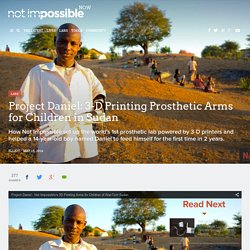 More to the point of the journey is that the Not Impossible team managed to give hope and independence back to Daniel Omar who, at age 14, had both his arms blown off by a bomb dropped on his village and considered his life not worth living. Just prior to the trip, the now 16-year-old Daniel was located in a 70,000 person refugee camp in Yida. Now disbanded, due to escalated fighting in the South Kordofan region, Yida was named "one of the most challenging refugee camps in the world," by the United Nations. Not Impossible. E-NABLE connecte les imprimeurs 3D avec des demandeurs de prothèses. Affordable 3D Printed Bionic Hand For Anyone. The Open Hand Project: A Low Cost Robotic Hand.

The Open Hand Project is an open source initiative with the goal of making robotic prosthetic hands more accessible to amputees. 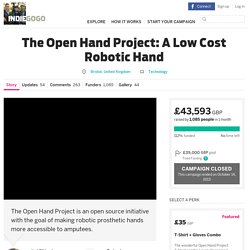 It's a year on from the campaign now but we're still up to loads of really cool stuff! Visit www.openbionics.com to see what the future holds and www.openhandproject.org to get updates on the Open Hand Project! Heart-warming moment when six-year-old boy is given a 3D printed hand as Children's Day gift. Jun 1, 2015 | By Simon Among all of the 3D printing-related ‘feel-good’ stories we’ve been hearing about over the past few years, few are as heartwarming as those that involve the design and fabrication of 3D printed prosthetic hands for young children. 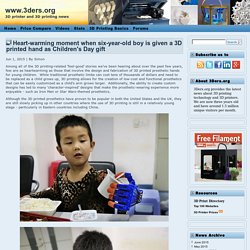 While traditional prosthetic limbs can cost tens of thousands of dollars and need to be replaced as a child grows up, 3D printing allows for the creation of low-cost and functional prosthetics that can be easily customized as a child’s arm grows larger. A Global Network Of Passionate Volunteers Using 3D Printing To Give The World A "Helping Hand.". 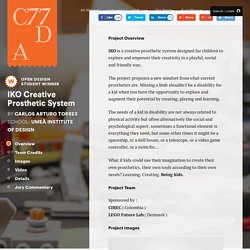 The project proposes a new mindset from what current prosthetics are. Missing a limb shouldn't be a disability for a kid when you have the opportunity to explore and augment their potential by creating, playing and learning. The needs of a kid in disability are not always related to physical activity but often alternatively the social and psychological aspect; sometimes a functional element is everything they need, but some other times it might be a spaceship, or a doll house, or a telescope, or a video game controller, or a swim fin...

What if kids could use their imagination to create their own prosthetics, their own tools according to their own needs? Project Details Empowering kids in disability to raise their voice, to realize they are indeed special was my first thought when I started the project. Exiii. Lego-compatible prosthetic arm lets kids' imaginations run wild. Handiii  ENG exiii.