How Wikipedia can become a no-asshole-zone. Black Sapote or Chocolate Pudding Fruit - Diospyros digyna. Not surprisingly this is one of our most popular fruits and if you like Chocolate you'll love Black Sapote. 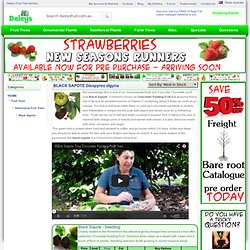 Commonly known as Chocolate Pudding Fruit this amazing fruit is low in fat and an excellent source of Vitamin C containing about 4 times as much as an orange. The fruit is delicious eaten fresh or used as a chocolate substitute in recipes and milkshakes or simply mix the pulp with yogurt and lemon juice for a refreshing treat. Fruits can be cut in half and eaten covered in passion fruit, in Mexico the pulp is mashed with orange juice or brandy and served with cream, it is also delicious mixed with wine, cinnamon and sugar. The green fruit is picked when hard and allowed to soften and go brown within 3-6 days. At the ripe stage - you should be able to press the skin with your fingers and leave an indent. Black Sapote - Seedling Closely related to the Persimmon this attractive glossy foliaged tree produces a fruit often called the 'Chocolate Pudding Fruit'. Mikey, the Robot That Charges Itself. Artificial Muscles Use Carbon Nanotube Sheets. CBRN Protection.

Army develops Vader-like power-cooled gas mask/helmet combo. The US Army’s Edgewood Chemical Biological Center (ECBC) has developed a new combination of helmet and respirator mask that will keep soldiers safer and more comfortable when buttoned down against chemical, biological, or radiation threats. 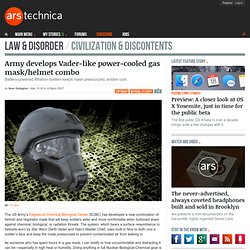 The system, which bears a surface resemblance to helmets worn by Star Wars’ Darth Vader and Halo’s Master Chief, uses built-in fans to both cool a soldier’s face and keep the mask pressurized to prevent contaminated air from leaking in. As someone who has spent hours in a gas mask, I can testify to how uncomfortable and distracting it can be—especially in high heat or humidity. Doing anything in full Nuclear-Biological-Chemical gear is an order of magnitude harder under the best of conditions. By adding a blower to the mask, the Army is hoping to make it easier for soldiers to focus more on the mission and less on the sweat pooling around their eyes.

The ECBC’s Respiratory Protection Branch has been developing and testing the mask for the past year. This plastic heals itself through a process that's eerily... OpenEEG hardware. The OpenEEG project has seen contributions from many talented hardware people over the years, resulting in several different designs which have been tested and tried by various people. 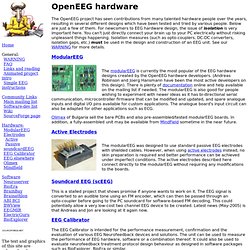 Below are just a few of them. For newcomers to EEG hardware design, the issue of isolation is very important here. You can't just directly connect your brain up to your PC electrically without risking unpleasant things happening. A Mix of Mind Reading Devices. The OpenEEG project The most affordable do it yourself mind reader. This open project made by hobbyists for hobbyists toots an impressive array of configurations to suit the needs of just about anyone wanting to explore the brain on the cheap. * Soller Composites * Carbon Fiber Fabric. Make your own biodiesel. The first two methods sound easiest, but, as so often in life, it's not quite that simple. 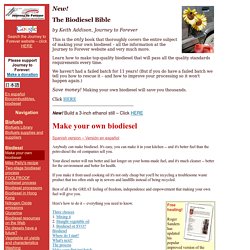 Vegetable oil is much more viscous (thicker) than either petro-diesel or biodiesel. The purpose of mixing or blending straight vegetable oil (SVO) with other fuels and solvents is to lower the viscosity to make it thinner, so that it flows more freely through the fuel system into the combustion chamber. If you're mixing SVO with petro-diesel you're still using fossil-fuel -- cleaner than most, but still not clean enough, many would say. Still, for every gallon of SVO you use, that's one gallon of fossil-fuel saved, and that much less climate-changing carbon dioxide in the atmosphere.

Get instant scientific insights on how to improve your website. Touche for Arduino: Advanced touch sensing. Update: New interface - look at the last step. 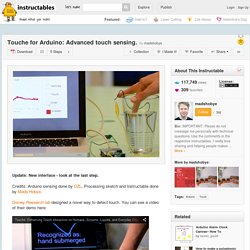 Credits: Arduino sensing done by DZL, Processing sketch and Instructable done by Mads Hobye. Disney Research lab designed a novel way to detect touch. CapacitiveSensor. Native Capacitive Sensors without additional Hardware You can create a touch-sensitive input on any of the Arduino's pins. It requires no special hardware, nevertheless a capacitor of 1nF is recommended in line with the pin to decouple 50Hz noises. Connect a wire or some metallic plate to a pin. The code works by setting the pin to ground, turning on the internal pull-up resistor, and measuring the time it takes for the pin to return to the HIGH state.

If untouched readCapacitivePin returns a low value e.g. "1"; when touched it rises to about 5. The pin is toggled to output mode to discharge the port, and if connected to a voltage source, will short circuit the pin, potentially damaging the Arduino and any hardware attached to the pin. CapacitiveSensor. (redirected from Main.CapSense) by Paul Badger Download. 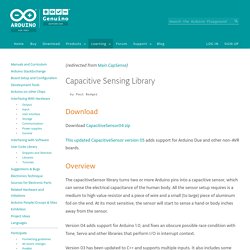 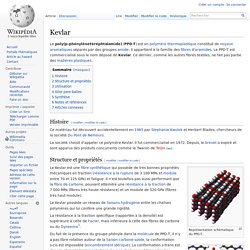 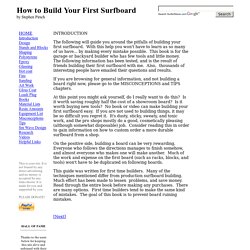 It is not biased by any direct advertising and no money is accepted for any links shown. It is made for you and supported by you. Thanks to the users below for keeping this site alive and unbiased with their donations. The following will guide you around the pitfalls of building your first surfboard. 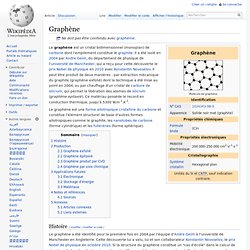 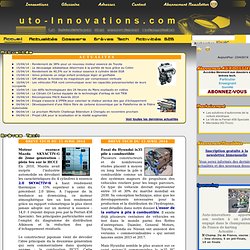 Vue des résultats. Watch This Table Turn Sound Into A Dancing Pattern Of Flames. New Paper Explains How To Make Supermaterial Graphene In A Blender. Mesh networking. Illustration of a mesh network. A mesh network can be designed using a flooding technique or a routing technique. When using a routing technique, the message is propagated along a path, by hopping from node to node until the destination is reached. To ensure all its paths' availability, a routing network must allow for continuous connections and reconfiguration around broken or blocked paths, using self-healing algorithms. A mesh network whose nodes are all connected to each other is a fully connected network.

Mesh networks can be seen as one type of ad hoc network. Building a Mesh Networked Conference Badge. Interactive Gloves Turn Gestures into Music. Compost Your Used Coffee Grounds to Kickstart Your Own DIY Fertilizer. Before you throw out your next batch of used coffee grounds, consider composting them.

As food weblog Serious Eats points out, composting used coffee grounds is a great way to start cheap, low-mainetenance DIY fertilizer. Used coffee grounds are rich in nitrogen, one of the main ingredients necessary for both a good fertilizer and a properly balanced compost pile: When paired with "browns" like leaves, twigs, even coffee filters, coffee is the perfect catalyst for healthy decomposition, which can speed up the composting process and give you better fertilizer faster.

LASER-ENGRAVED ROLLING PINS. Portable SMT Lab for Hacker On The Go. See-through, shatter-proof armor inspired by oysters. Introducing the latest in bioceramic armor: lightweight and transparent yet tough-as-nails, and totally inspired by the natural exoskeleton of a bivalve mollusk. The defensive armor of the windowpane oyster (Placuna placenta) is incredibly resistant to penetrating attacks and damage -- a surprising fact given how it’s 99 percent calcite, a weak and brittle mineral.

(The other 1 percent is an organic material, and not adamantium or anything.) The outer shell even stays transparent despite suffering multiple blows, which can’t be said for manmade windshields or visors. Some Indian and Philippine cities have used the translucent shell for lampshades and as cheaper alternative to window glass. Pure calcite shatters easily. First, they subjected the shell to indentation tests.

Recycling Plastic With Liquid Nitrogen. Gridzzly.com - Make your own grid paper. What Do I Do When Someone Has a Domain Name I Want? Minnesota Power, an ALLETE Company - For Your Home. Why Debt is creeping into so many science fiction discussions. Coffee and its Effects on Feature Creep. Starting in mid-2004 and until the end of 2006, I worked at a small DNS and DHCP software company called Nominum. These days Nominum offers both software and services, but at its core what has allowed it to be as successful as it has been is the fact that its development group is, singularly, the most brilliant and personally committed to the company group of developers I've ever seen.

Most of the developers with whom I worked had been there from just about the beginning of the company. It was the sort of environment where my VP was still doing the Costco shopping (though admittedly she enjoyed it), everyone knew every other employee's spouse's name, and we got together to have our dogs play. How a coffee-order chatbot turned into a bank. Resources.scienceworld.ca/pdf/perception_illusions/Illusions_14SpeechToSong.pdf. Custom Mechanical Keyboards. Wyager/MicroMechBoard. Six Pacmen Audio visual performance piece by. What is it like to hear color? It's truly amazing what technology can do these days. Really makes you think about how the human race will be in the next 100 years. The human race will pretty much be the same in the next hundred years, actually human beings will be the same forever. Price of novelty techs will always remain high.

Soon our roads could be made of smart solar panels. Road Surface Layer - translucent and high-strength, it is rough enough to provide great traction, yet still passes sunlight through to the solar collector cells embedded within Aaaaaand had to suspend my disbelief here. I love the idea and the potential it has, but something that is... Affordable on the scale of roadwaysTransparent enough to charge the cells beneath even after years/decades of useTough enough to weather years/decades of use without cracking or wearing through. Forget Stopping Bullets – Vest Warms You While Stopping Taser. Introduction. Audio Examples. Here are some algorithmic random music examples in MP3 format. All examples have been created using SoundHelix with a MIDI software synthesizer, have been recorded using Audacity and have been converted to MP3 format using the Lame MP3 Encoder via Audacity.

Note that all songs with the same record date have been created with an identical SoundHelix XML file. Please read the license before using these MP3s anywhere. MP3 examples. Grow Your Own Music with MusiGenesis. Musictheory.net. Notification : sécurité - risque lié aux programmes malveillants. Free Science & Engineering software downloads. AlphaWorks Community. InMusic. This page is divided in four sections: Music software written in Python, Music software supporting Python, Music programming in Python, and a category of unsorted (may still fit in the above) Musicalgorithms.ewu.edu/algorithms.html.