Fuzzy cognitive map. A collection of papers with applications in various disciplines is presented in the book "Fuzzy Cognitive Maps: Advances in Theory, Methodologies, Applications and Tools[5] edited by Michael Glykas and prefaced by Bart Kosko. 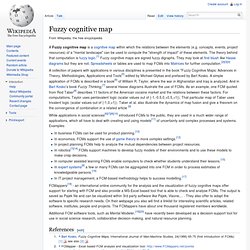 A simple application of FCMs is described in a book[6] of William R. Taylor, where the war in Afghanistan and Iraq is analyzed. And in Bart Kosko's book Fuzzy Thinking,[7] several Hasse diagrams illustrate the use of FCMs. As an example, one FCM quoted from Rod Taber[8] describes 11 factors of the American cocaine market and the relations between these factors. For computations, Taylor uses pentavalent logic (scalar values out of {-1,-0.5,0,+0.5,+1}). While applications in social sciences[6][7][8][10] introduced FCMs to the public, they are used in a much wider range of applications, which all have to deal with creating and using models[11] of uncertainty and complex processes and systems.

FCMapper - our Fuzzy Cognitive Mapping Software Solution. Cognitive map. A cognitive map (also: mental map or mental model) is a type of mental representation which serves an individual to acquire, code, store, recall, and decode information about the relative locations and attributes of phenomena in their everyday or metaphorical spatial environment. 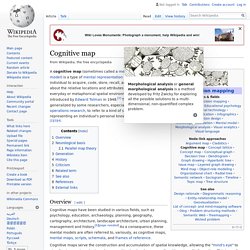 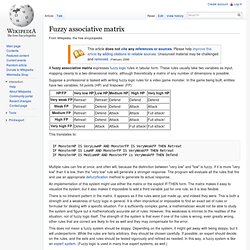 An implementation of this system might use either the matrix or the explicit IF/THEN form. There is no inherent pattern in the matrix. This does not mean a fuzzy system should be sloppy. Defuzzification. Defuzzification is the process of producing a quantifiable result in fuzzy logic, given fuzzy sets and corresponding membership degrees. 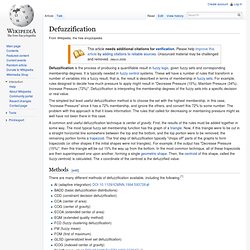 It is typically needed in fuzzy control systems. These will have a number of rules that transform a number of variables into a fuzzy result, that is, the result is described in terms of membership in fuzzy sets. For example, rules designed to decide how much pressure to apply might result in "Decrease Pressure (15%), Maintain Pressure (34%), Increase Pressure (72%)". Defuzzification is interpreting the membership degrees of the fuzzy sets into a specific decision or real value.

The simplest but least useful defuzzification method is to choose the set with the highest membership, in this case, "Increase Pressure" since it has a 72% membership, and ignore the others, and convert this 72% to some number. Fuzzy logic. Fuzzy logic is a form of many-valued logic; it deals with reasoning that is approximate rather than fixed and exact. 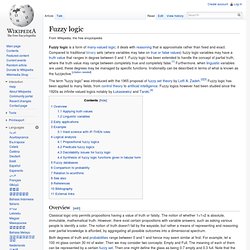 Compared to traditional binary sets (where variables may take on true or false values) fuzzy logic variables may have a truth value that ranges in degree between 0 and 1. Fuzzy logic has been extended to handle the concept of partial truth, where the truth value may range between completely true and completely false.[1] Furthermore, when linguistic variables are used, these degrees may be managed by specific functions. Irrationality can be described in terms of what is known as the fuzzjective. [citation needed] The term "fuzzy logic" was introduced with the 1965 proposal of fuzzy set theory by Lotfi A. Overview[edit] Classical logic only permits propositions having a value of truth or falsity.

Both degrees of truth and probabilities range between 0 and 1 and hence may seem similar at first. Applying truth values[edit] Lotfi A. Zadeh. Lotfali Askar Zadeh (born February 4, 1921), better known as Lotfi A. 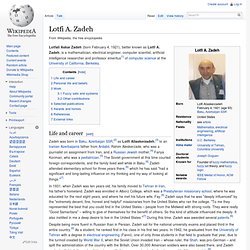 Zadeh, is a mathematician, electrical engineer, computer scientist, artificial intelligence researcher and professor emeritus[1] of computer science at the University of California, Berkeley. Life and career[edit] Zadeh was born in Baku, Azerbaijan SSR,[2] as Lotfi Aliaskerzadeh,[3] to an Iranian Azerbaijanis father from Ardabil, Rahim Aleskerzade, who was a journalist on assignment from Iran, and a Russian Jewish mother,[4] Fanya Koriman, who was a pediatrician.[5] The Soviet government at this time courted foreign correspondents, and the family lived well while in Baku.[6] Zadeh attended elementary school for three years there,[6] which he has said "had a significant and long-lasting influence on my thinking and my way of looking at things. "[7] In 1931, when Zadeh was ten years old, his family moved to Tehran in Iran, his father's homeland. Fuzzy set. It has been suggested by Thayer Watkins that Zadeh's ethnicity is an example of a fuzzy set because "His father was Turkish-Iranian (Azerbaijani) and his mother was Russian. 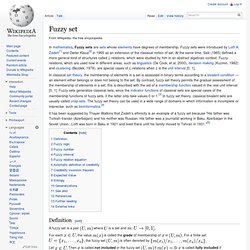 His father was a journalist working in Baku, Azerbaijan in the Soviet Union...Lotfi was born in Baku in 1921 and lived there until his family moved to Tehran in 1931. Fuzzy cognitive map. Relational database. In the relational model, each table schema must identify a column or group of columns, called the primary key, to uniquely identify each row. 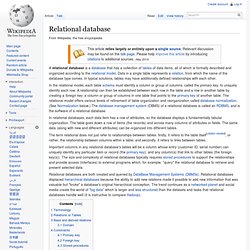 A relationship can then be established between each row in the table and a row in another table by creating a foreign key, a column or group of columns in one table that points to the primary key of another table. The relational model offers various levels of refinement of table organization and reorganization called database normalization. (See Normalization below.) T-norm fuzzy logics. T-norm fuzzy logics are a family of non-classical logics, informally delimited by having a semantics which takes the real unit interval [0, 1] for the system of truth values and functions called t-norms for permissible interpretations of conjunction. 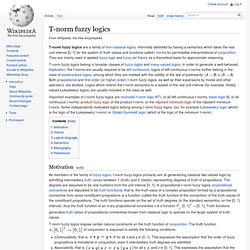 They are mainly used in applied fuzzy logic and fuzzy set theory as a theoretical basis for approximate reasoning. T-norm fuzzy logics belong in broader classes of fuzzy logics and many-valued logics. In order to generate a well-behaved implication, the t-norms are usually required to be left-continuous; logics of left-continuous t-norms further belong in the class of substructural logics, among which they are marked with the validity of the law of prelinearity, (A → B) ∨ (B → A). Both propositional and first-order (or higher-order) t-norm fuzzy logics, as well as their expansions by modal and other operators, are studied.