Neural balls and strikes: Where categories live in the brain. Public release date: 15-Jan-2012 [ Print | E-mail Share ] [ Close Window ] Contact: Robert Mitchumrobert.mitchum@uchospitals.edu 773-484-9890University of Chicago Medical Center Hundreds of times during a baseball game, the home plate umpire must instantaneously categorize a fast-moving pitch as a ball or a strike. 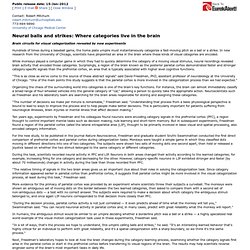 In new research from the University of Chicago, scientists have pinpointed an area in the brain where these kinds of visual categories are encoded. While monkeys played a computer game in which they had to quickly determine the category of a moving visual stimulus, neural recordings revealed brain activity that encoded those categories. "This is as close as we've come to the source of these abstract signals" said David Freedman, PhD, assistant professor of neurobiology at the University of Chicago. 238An. CLASSIFICATION METHODS.

This section briefly describes the various classification methods used in order to categorize the email messages into various folders. 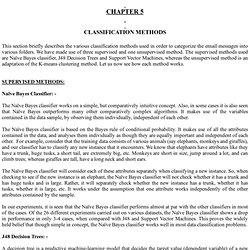 In our experiments, it is seen that the Naïve Bayes classifier performs almost at par with the other classifiers in most of the cases. J48 Decision Trees: - The J48 Decision tree classifier follows the following simple algorithm. Dependent Variable: Game Won or Lost Lost Won. Shearing layers. Description The Shearing layers concept views buildings as a set of components that evolve in different timescales; Frank Duffy summarized this view in his phrase: “Our basic argument is that there isn't any such thing as a building. 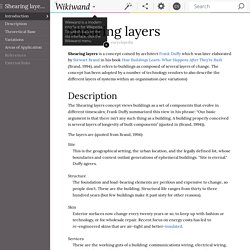 A building properly conceived is several layers of longevity of built components” (quoted in (Brand, 1994)). The layers are (quoted from Brand, 1994): Site This is the geographical setting, the urban location, and the legally defined lot, whose boundaries and context outlast generations of ephemeral buildings. Structure The foundation and load-bearing elements are perilous and expensive to change, so people don't. Skin Exterior surfaces now change every twenty years or so, to keep up with fashion or technology, or for wholesale repair. Services These are the working guts of a building: communications wiring, electrical wiring, plumbing, fire sprinkler systems, HVAC (heating, ventilating, and air conditioning), and moving parts like elevators and escalators. Stuff. 12_Classification. Market Segmentation. Statistical classification. In machine learning and statistics, classification is the problem of identifying to which of a set of categories (sub-populations) a new observation belongs, on the basis of a training set of data containing observations (or instances) whose category membership is known. 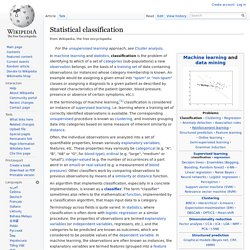 An example would be assigning a given email into "spam" or "non-spam" classes or assigning a diagnosis to a given patient as described by observed characteristics of the patient (gender, blood pressure, presence or absence of certain symptoms, etc.). In the terminology of machine learning,[1] classification is considered an instance of supervised learning, i.e. learning where a training set of correctly identified observations is available. The corresponding unsupervised procedure is known as clustering, and involves grouping data into categories based on some measure of inherent similarity or distance.

Terminology across fields is quite varied. Relation to other problems[edit] Frequentist procedures[edit] Algorithms[edit] Supervised Machine Learning: A Review of Classification Techniques. Hierarchical Clustering. Overview Agglomerative hierarchical clustering is a bottom-up clustering method where clusters have sub-clusters, which in turn have sub-clusters, etc. 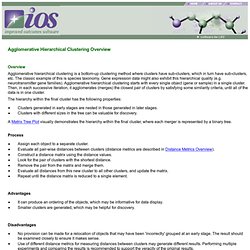 The classic example of this is species taxonomy. Gene expression data might also exhibit this hierarchical quality (e.g. neurotransmitter gene families). Agglomerative hierarchical clustering starts with every single object (gene or sample) in a single cluster. Then, in each successive iteration, it agglomerates (merges) the closest pair of clusters by satisfying some similarity criteria, until all of the data is in one cluster. The hierarchy within the final cluster has the following properties: Clusters generated in early stages are nested in those generated in later stages. A Matrix Tree Plot visually demonstrates the hierarchy within the final cluster, where each merger is represented by a binary tree. Process Assign each object to a separate cluster.