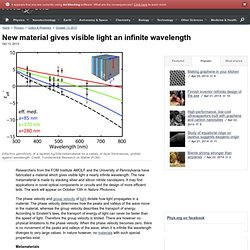 Scientists create first computer-designed superconductor. (Phys.org) —A Binghamton University scientist and his international colleagues report this week on the successful synthesis of the first superconductor designed entirely on the computer. 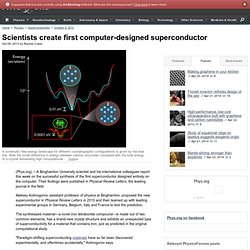 Their findings were published in Physical Review Letters, the leading journal in the field. Aleksey Kolmogorov, assistant professor of physics at Binghamton, proposed the new superconductor in Physical Review Letters in 2010 and then teamed up with leading experimental groups in Germany, Belgium, Italy and France to test the prediction. New finding shows climate change can happen in a geological instant. (Phys.org) —"Rapid" and "instantaneous" are words geologists don't use very often. 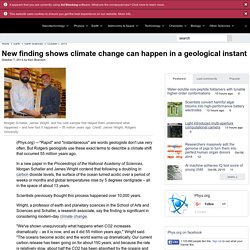 But Rutgers geologists use these exact terms to describe a climate shift that occurred 55 million years ago. In a new paper in the Proceedings of the National Academy of Sciences, Morgan Schaller and James Wright contend that following a doubling in carbon dioxide levels, the surface of the ocean turned acidic over a period of weeks or months and global temperatures rose by 5 degrees centigrade – all in the space of about 13 years.

SatPointer - Dish Alignment, Satellite Pointer and Direction Analyzer using Google Maps. Researchers find evidence of hot spot that burned eastern underside of US tectonic plate. (Phys.org) —A combined team of researchers from the U.S. and China has found evidence of what they believe is burning on the underside of the North American tectonic plate. 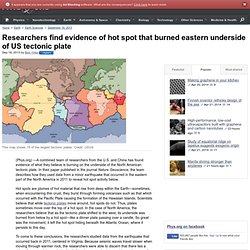 In their paper published in the journal Nature Geoscience, the team describes how they used data from a minor earthquake that occurred in the eastern part of the North America in 2011 to reveal hot spot activity below. Hot spots are plumes of hot material that rise from deep within the Earth—sometimes, when encountering thin crust, they burst through forming volcanoes such as that which occurred with the Pacific Plate causing the formation of the Hawaiian Islands. 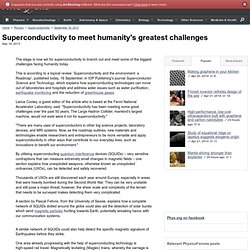 This is according to a topical review `Superconductivity and the environment: a Roadmap', published today, 16 September, in IOP Publishing's journal Superconductor Science and Technology, which explains how superconducting technologies can move out of laboratories and hospitals and address wider issues such as water purification, earthquake monitoring and the reduction of greenhouse gases. Lance Cooley, a guest editor of the article who is based at the Fermi National Accelerator Laboratory, said: "Superconductivity has been meeting some great challenges over the past 50 years. The Large Hadron Collider, mankind's largest machine, would not exist were it not for superconductivity.

" "There are many uses of superconductors in other big science projects, laboratory devices, and MRI systems. Explore further: Visualizing short-range charge transfer at interfaces. Tesla Motors Inc (TSLA) And 300,000 Reasons To Doubt The Stock: BAML. The debate continues about Tesla Motors Inc (NASDAQ:TSLA) and whether it is overvalued. 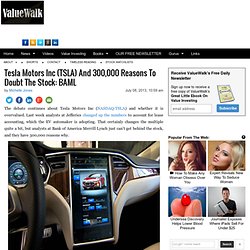 Last week analysts at Jefferies changed up the numbers to account for lease accounting, which the EV automaker is adopting. That certainly changes the multiple quite a bit, but analysts at Bank of America Merrill Lynch just can’t get behind the stock, and they have 300,000 reasons why. Of course those 300,000 reasons boil down to one big reason and a number of smaller ones, with 300,000 representing the difference in Tesla’s 2013 projected sales volume and the volume BAML believes Tesla Motors Inc (NASDAQ:TSLA) would have to hit by 2020 in order to validate the high stock price. BAML Maintains $39 Price Objective Analysts John Lovallo II and John Murphy say they’re maintaining their $39 per share price objective for shares of Tesla Motors Inc (NASDAQ:TSLA) because they believe the stock is overvalued. Tesla’s Sales Volumes.

The better to see you with: Scientists build record-setting metamaterial flat lens. Tesla Stock Today Looking A Lot Like General Motors In 1915. Motion quotient: IQ predicted by ability to filter motion (w/ video) A brief visual task can predict IQ, according to a new study. 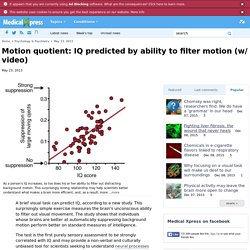 This surprisingly simple exercise measures the brain's unconscious ability to filter out visual movement. The study shows that individuals whose brains are better at automatically suppressing background motion perform better on standard measures of intelligence. The test is the first purely sensory assessment to be strongly correlated with IQ and may provide a non-verbal and culturally unbiased tool for scientists seeking to understand neural processes associated with general intelligence. "Because intelligence is such a broad construct, you can't really track it back to one part of the brain," says Duje Tadin, a senior author on the study and an assistant professor of brain and cognitive sciences at the University of Rochester. "But since this task is so simple and so closely linked to IQ, it may give us clues about what makes a brain more efficient, and, consequently, more intelligent. 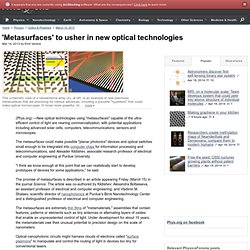 The metasurfaces could make possible "planar photonics" devices and optical switches small enough to be integrated into computer chips for information processing and telecommunications, said Alexader Kildishev, associate research professor of electrical and computer engineering at Purdue University. "I think we know enough at this point that we can realistically start to develop prototypes of devices for some applications," he said. The promise of metasurfaces is described in an article appearing Friday (March 15) in the journal Science. Breakthrough promises significantly more efficient solar cells. A new technique developed by U of T Engineering Professor Ted Sargent and his research group could lead to significantly more efficient solar cells, according to a recent paper published in the journal Nano Letters. 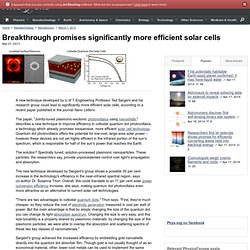 The paper, "Jointly-tuned plasmonic-excitonic photovoltaics using nanoshells," describes a new technique to improve efficiency in colloidal quantum dot photovoltaics, a technology which already promises inexpensive, more efficient solar cell technology. Quantum dot photovoltaics offers the potential for low-cost, large-area solar power – however these devices are not yet highly efficient in the infrared portion of the sun's spectrum, which is responsible for half of the sun's power that reaches the Earth. 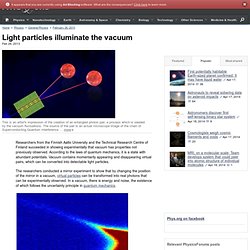 According to the laws of quantum mechanics, it is a state with abundant potentials.