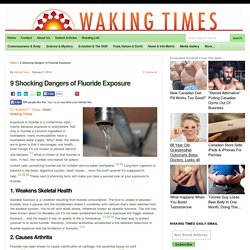 Edward F. Group, GuestWaking Times Exposure to fluoride is a contentious topic, mostly because exposure is everywhere. Not only is fluoride a common ingredient in toothpaste, many municipalities have a fluoridated water supply. Why? 1. Skeletal fluorosis is a condition resulting from fluoride consumption. 2. Fluoride has been shown to cause calcification of cartilage, the essential tissue for joint health. [11] Degenerative osteoarthritis has been linked to skeletal fluorosis. [12] And in a study of individuals suffering from fluorosis, osteoarthritis knee conditions occurred frequently. [13] 3. Iodine and fluoride belong to a family of compounds known as halogens. 4. Although the full capabilities of the pineal gland have been the subject of debate for centuries, it’s known for certain that, at a minimum, the pineal gland regulates body rhythms and wake-sleep cycles; two extremely important functions. Yahoo - login. a3cd4a236d991c5ba9e1160954a1d488.jpg (JPEG Image, 960 × 960 pixels)

Regrowing strong, healthy, happy teeth. Regrow your Teeth. Regenerating Your Teeth. 21 Home Remedies for a Toothache - Pioneer Settler. 100% Natural Organic Toothbrush. This Natural Alternative to Toothbrushes May Surprise You… The kind of toothbrush we all have in our bathrooms was invented in 1938. 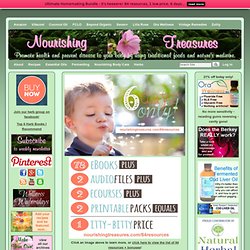 Previously, from about 1498, boar bristles attached to bamboo or bone handles were used. But what came before that? Answer: The miswak. I have only been aware of the miswak for a year or so, and it took me this long to finally break down and buy one. Of all the areas in my life I’ve tried to switch to more traditional roots, an alternative to my toothbrush wasn’t a high priority. And then, like everything else, I researched. This natural stick, which is actually a length of root from the Peelu tree, is a natural and more effective toothbrush than your typical plastic and nylon kind. Beyond the miswak not being synthetic, which is enough reason for me to try it, it actually kills bacteria and fights plaque. What Does Science Say? I admit I was skeptical.

Then I came across this clinical study. The study concluded the miswak is more effective than toothbrushing for reducing plaque and gingivitis. Getting Started Want one? Healing Cavities Through Nutrition – a Cheat Sheet. Tooth decay is caused by a deficiency of vitamins, minerals, and other nutrients the body needs to build healthy teeth. 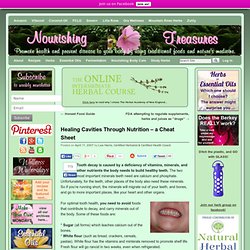 The two most important minerals teeth need are calcium and phosphate. Unfortunately, for the teeth, other places of the body also need these minerals. So if you’re running short, the minerals will migrate out of your teeth, and bones, and go to more important places, like your heart and other organs. For optimal tooth health, you need to avoid foods that contribute to decay, and carry minerals out of the body. Some of these foods are: * Sugar (all forms) which leaches calcium out of the bones. * White flour (such as bread, crackers, cereals, pastas).

“Secondary dentine” which is dentin generated on an as-needed basis, which enamel has been worn away and cavities have begun. Dr. He also found an additional fat soluble vitamin which he called Activator X (scientists now call this the Price Factor). How to heal cavities naturally. Share by Derek Henry | Natural News The world is slowly waking up to the fact that, when you give the body what it needs, it can heal things we previously thought were impossible. 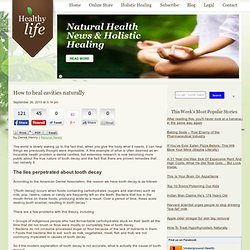 A fine example of what is often deemed as an incurable health problem is dental cavities, but extensive research is now becoming more public about the true nature of tooth decay and the fact that there are proven remedies that can remedy it. The lies perpetrated about tooth decay According to the American Dental Association, the reason we have tooth decay is as follows: “[Tooth decay] occurs when foods containing carbohydrates (sugars and starches) such as milk, pop, raisins, cakes or candy are frequently left on the teeth. There are a few problems with this theory, including: So if the modern explanation of tooth decay is not accurate, what is actually the cause of tooth decay? Everything You Need to Know About Clay Toothpaste. Clay. 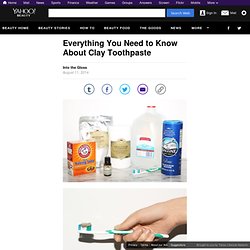 What’s it good for? Some would say toothpaste. Probably not dentists though, on account of it lacking fluoride and FDA approval. There are some people who are not dentists that claim the clay acts as a natural polisher, while being mineral-rich and alkaline (this is a good thing?). We’re game to experiment—once, to see what it feels like. [Mixed up in a glass bowl, the paste bears a stronger resemblance to wet concrete than Crest. Kim Johnson: That’s a bit disturbing. Emily Ferber: It’s unclear the best way to get it on the toothbrush. Emily Weiss: You’re literally supposed to brush your teeth with this clay on a toothbrush? EF: Yes. EW: If we don’t make it through this, I just wanna tell you, I’m happy to have known you all. [Everyone scoops some gray matter from the bowl onto her toothbrush] Tooth Meridian Chart. How to Naturally Reverse Cavities and Heal Tooth Decay. Dr. 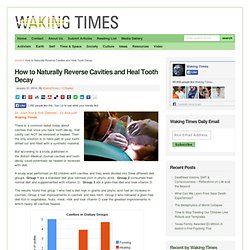 Josh Axe & Eric Zielinski, Dr.Axe.comWaking Times There is a common belief today about cavities that once you have tooth decay, that cavity can NOT be reversed or healed. Then the only solution is to have part of your tooth drilled out and filled with a synthetic material. But according to a study published in the British Medical Journal cavities and tooth decay could potentially be healed or reversed with diet. A study was performed on 62 children with cavities and they were divided into three different diet groups. The results found that group 1 who had a diet high in grains and phytic acid had an increase in cavities.

This study along with the backing of many doctors and dentists is proving we have been misinformed about what causes cavities and if they can truly be reversed. Dentist Ramiel Nagel who authored the book Cure Tooth Decay has helped many of his patients “reverse” their tooth decay and would rather not put in fillings. The Cause of Tooth Decay. How to heal cavities naturally. Dentistry.