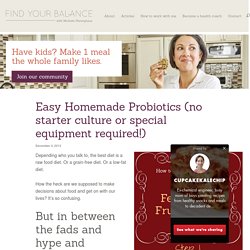 December 4, 2013 Depending who you talk to, the best diet is a raw food diet. Or a grain-free diet. Or a low-fat diet. How the heck are we supposed to make decisions about food and get on with our lives? But in between the fads and hype and extreme views, there are some areas of truth that overlap. One of those truths? Some dietary theories don’t mention fermented food, but I’ve never found one that actively recommends against it. I first learned all this while studying Macrobiotics. At one point I tried. I gave up. Four years later, I felt ready to try again.

After all, I’ve got one toddler and a baby on the way. Actually, my kids are giving me good reason to work on my home fermentation. So, here we are folks. How to Make Cardamom Infused Tonic Water. 20 Healthy Alternatives to Soda. If you're new here, you may want to sign up for FREE weekly updates delivered to your inbox featuring Real Food recipes, nutrition & health articles, and special discounts or promotions. 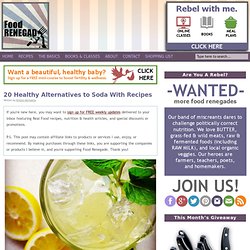 P.S. Homemade Ginger Ale. UPDATE: This post originally ran on December 17 2013, but we love this homemade recipe so much we had to share it again! 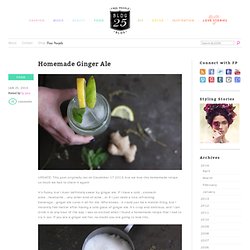 It’s funny, but I most definitely swear by ginger ale. If I have a cold…stomach ache…headache….any other kind of ache…or if I just need a nice refreshing beverage…ginger ale cures it all for me. Who knows…it could just be a mental thing, but I instantly feel better after having a cold glass of ginger ale. It’s crisp and delicious, and I can drink it at any hour of the day. I was so excited when I found a homemade recipe that I had to try it out. What you need: 1 cup fresh ginger, peeled and sliced 1 cup sugar 2 cups water club soda lemon and lime juice mint First, peel some fresh ginger root and cut it into small slices until you have a cup’s worth. 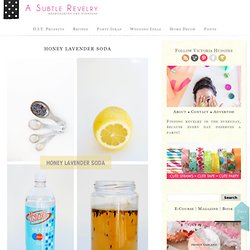 It was my first attempt at herbal soda making and it was amazing! I made a second batch this week to drink myself, it is incredibly refreshing on a hot afternoon. To make the soda; combine 1 cup of honey with 1 cup of water and 1 tablespoon of lavender florets (find these in the spice section). Simmer until combined, about three minutes. Strain most of the lavender out and let chill until ready to use.

PS. 7 Beers That You Should Stop Drinking Immediately. Organics.org Many of us choose what we eat very carefully, or at least dedicate our minimum attention to it. 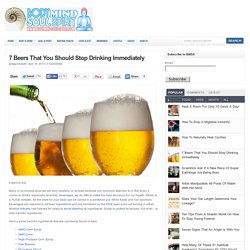 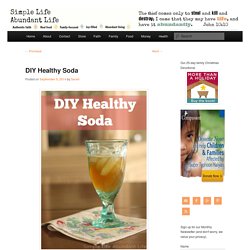 When my eyes were opened to the world of real food, I learned to start reading ingredients instead of calories, and here is what I found: Carbonated waterHigh fructose corn syrup (A probable GMO)Caramel color (A probable GMO and linked to cancer)Phosphoric acid (derived from a rock. Seriously! But don’t worry, they remove the arsenic compounds before they put it in your drink.)Natural Flavors (A probable GMO/excitoxin/addictive element from “natural” sources including bugs, beaver butts, and other deliciously savory things.)Caffeine Ya’ll, there is not one redeemable quality about drinking conventional soda. But don’t despair my friends. Score! Water Kefir This homemade soda is made with water kefir grains (not to be confused with milk kefir grains).

They are clear, gummy-like “grains” that when placed in a sugary solution like sugar water or juice, eat away at the sugars creating a probiotic-rich, lacto-fermented beverage that is carbonated. Lacto-femented Sparkling Apple Cider - Nourishing Simplicity. Nothing says the holidays like a glass of sparkling apple cider. 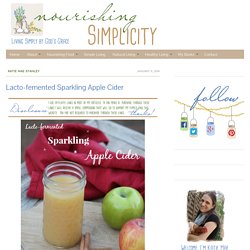 It’s the favorite of kids and many adults for Thanksgiving, Christmas, weddings and toasting in the New Year. You would not belive how easy it is to make your own sparkling apple cider that is full of millions of healthy bacteria, enzymes and probiotics! Mix whey with apple juice, cover and a few days later you have your very own lacto-fermented apple cider! The fermentation process eats up of most of the sugars in the juice and leaves it slightly carbonated. It’s as easy as that, you’re very own bubbly drink is ready for your next special occasion. Ancient Ales. You might not know it, but medieval Germans nearly ruined beer forever. 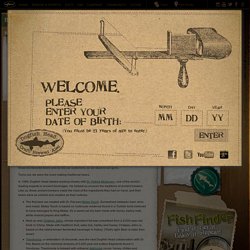 In 1516, a purity law called the Reinheitsgebot mandated that beer be made with only water, hops and barley. (The role of yeast hadn't yet been discovered.) Thanks to that bit of brewing censorship and the bastardized recipes of modern brewing conglomerates, beer drinkers have been subjected to bland lager for a long, long time.