WILLIAM TOMPKINS: SELECTED BY EXTRATERRESTRIALS - PART ONE. Live UFO Action Over The Ocean (12-7-2016) 5 Alien Species in Contact With Earth Right Now. Do you believe in Extraterrestrial Intelligence? 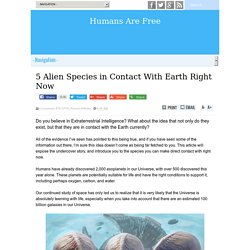 Humans have already discovered 2,000 exoplanets in our Universe, with over 500 discovered this year alone. Our continued study of space has only led us to realize that it is very likely that the Universe is absolutely teeming with life, especially when you take into account that there are an estimated 100 billion galaxies in our Universe. Our earth is only 4 billion years old in a universe that is 14 billion years old. Proven contact. Channeled drawings by Kaan while Bree and Wendy spoke galactic languages together. Human Colony. Spiritual Self Transformation. Video Of Alurean Visiting Us In Person (11-28-2016) Youtube. Super Soldier Talk - Monarch Sleeper Activation - Feat. Jessica & Peter.

Super Soldier Talk - Our Intergalactic Councils - Feat. Peter. Men In Black Agent N Hilary Clinton ET Channeling. The Sirius Connection — Everything About the Sirians. The star Sirius, the brightest in the sky as viewed from Earth, can be found in the Canis Major cons... 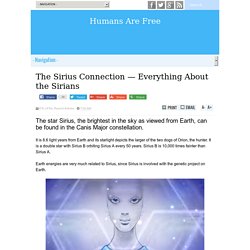 The star Sirius, the brightest in the sky as viewed from Earth, can be found in the Canis Major constellation. It is 8.6 light years from Earth and its starlight depicts the larger of the two dogs of Orion, the hunter. It is a double star with Sirius B orbiting Sirius A every 50 years. Sirius B is 10,000 times fainter than Sirius A. Earth energies are very much related to Sirius, since Sirius is involved with the genetic project on Earth. In fact billions of years ago the star Sirius B apparently imploded creating the fragments:EarthNibiruSirius Cthe remaining Sirius B(Other material states that Earth was formed from fragments in the Sirius system). Our solar system along with Sirius (double star) and the Pleiades revolve around the galactic centre every 225 million years (the reptilian cycle). The Sirians are masters of sacred geometry and control planetary orbits by sound. The Pleiadians - Pleiadian Perspectives On Human Evolution.

GoldFish Report No 60, A'drie and Max: Life on Lyra and Eliam. Escape 'Their' TRAP and Set Your Soul FREE. The following piece of information is extremely important to those who are advanced enough to actua... 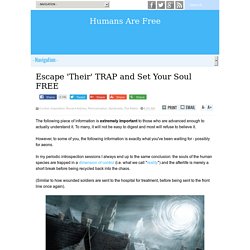 The following piece of information is extremely important to those who are advanced enough to actually understand it. Known Types of Aliens and Races. Reptilians Known Types of Aliens and Races AGHARIANS - (or Aghartians) A group of Asiatic or Nordic humans who, sources claim, discovered a vast system of caverns below the region of the Gobi desert and surrounding areas thousands of years ago, and have since established a thriving kingdom within, one which has been interacting with other-planetary systems up until current times. 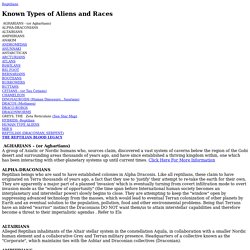 Click Here For More InformationALPHA-DRACONIANSReptilian beings who are said to have established colonies in Alpha Draconis. Like all reptilians, these claim to have originated on Terra thousands of years ago, a fact that they use to 'justify' their attempt to re-take the earth for their own. They are apparently a major part of a planned 'invasion' which is eventually turning from covert infiltration mode to overt invasion mode as the "window of opportunity" (the time span before International human society becomes an interplanetary and interstellar power) slowly begins to close. Alex Collier on Whales and Dolphins - Golden Age of Gaia. Before listening to Alex Collier’s short description of the Cetaceans, let me say that hearing what their nature, status, and mission was was one of the more startling revelations for me and took a while to integrate. 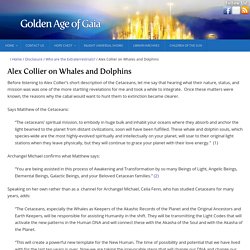 Once these matters were known, the reasons why the cabal would want to hunt them to extinction became clearer. Says Matthew of the Cetaceans: “The cetaceans’ spiritual mission, to embody in huge bulk and inhabit your oceans where they absorb and anchor the light beamed to the planet from distant civilizations, soon will have been fulfilled. These whale and dolphin souls, which species-wide are the most highly-evolved spiritually and intellectually on your planet, will soar to their original light stations when they leave physically, but they will continue to grace your planet with their love energy.” (1) 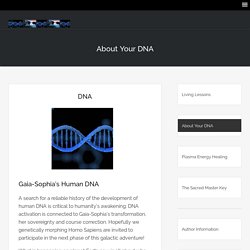 DNA activation is connected to Gaia-Sophia’s transformation, her sovereignty and course correction. Hopefully we genetically morphing Homo Sapiens are invited to participate in the next phase of this galactic adventure! Ancient Demons and Their Infernal Legacy. Demons have existed in myths and legends since ancient times. 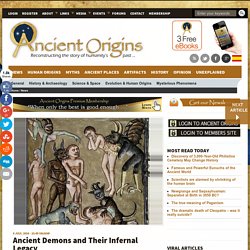 In the hierarchy of evil, as laid out in grimoires and occult texts, each demon has a name and a precise function. In medieval times, people carried out rites of protection as it was believed that every individual was stalked by demons, who waited for a moment of weakness in order to strike. Demonologists have compiled large volumes including the names and functions of each demon from the infernal hierarchy. These ranged from Satan, the ruler of all demons, down to Ukobach, the demon taking care of the infernal flame. According to legend, as each demon is specialized in a certain domain of activity, it can be invoked for help in that respective area. Akashic Records, The 7th Dimension & Sacred Soul Energy with Andrew Bartzis. Index of /rune/lydboker. Top Military Industrial Contractor Building a ‘Space Fence’ to Surveil Planet Earth.

Christina Sarich, StaffWaking Times As above, so below. 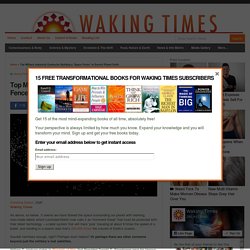 It seems we have littered the space surrounding our planet with teeming, man-made debris which Lockheed Martin now calls it an “imminent threat” that must be protected with their latest technology – a radar system that will track ‘junk’ traveling at about 9 times the speed of a bullet, and residing in a search area that’s 220,000 times the volume of Earth’s oceans. Sounds harmless enough, right? Perhaps even helpful? Or perhaps there are other concerns beyond just the military’s lost satellites. 2016-04-14 Andronicus 42 Kraton 1 Thor 1 Rhodan 19. 10 Historic Paintings That Clearly Show UFOs. Mysteries Many ancient wall paintings are said to show flying objects and visitors from outer space. 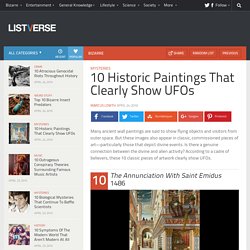 But these images also appear in classic, commissioned pieces of art—particularly those that depict divine events. Is there a genuine connection between the divine and alien activity? According to a cadre of believers, these 10 classic pieces of artwork clearly show UFOs. The New Humans by Mary Rodwell. 2016-02-25 Andronicus 35 - Rhodan11 - Meetis 7. Alien Bloodlines, & Unlocking DNA Mysteries Through Bliss 2/2 with Dan Winter. 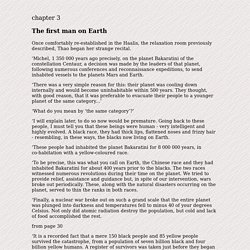 ‘Michel, 1 350 000 years ago precisely, on the planet Bakaratini of the constellation Centaur, a decision was made by the leaders of that planet, following numerous conferences and reconnaissance expeditions, to send inhabited vessels to the planets Mars and Earth. ‘There was a very simple reason for this: their planet was cooling down internally and would become uninhabitable within 500 years. How We Fast Forward Memories and Learn to Slow Time. Kirsten Cowart, GuestWaking Times Recently scientists from the University of Texas found a mechanism in the brain that explains how we are able to remember grand amounts of data in a matter of seconds. Before now scientists weren’t sure how we are able to take an event such as watching a movie or hanging out with our friends and compress it down into a few seconds of data recall. This mechanism also explains how we are able to plan out entire future events without spending a lot of time in our minds planning.

In other words, somehow we are able to speed up our memory and future memory very quickly. Andrew Bartzis - Star Wars Soft Disclosure - Our Ancient Lemurian Atlantian Heritage. Bases 37 Part 4 Max Spiers on the Music Industry. Welcome to the Exopaedia. New Discoveries Suggest We Live In a Multiverse Teeming With Alien Life. 2015-09-06 Simon_Parkes - connecting consciousness. Holographic Reality – Part 2 - Dr. Suzanne Lie Multidimensions.com. Dearest Grounded ONES, We are here within you today and always to assure you of the constant support and assistance that is found in the Flow. We are all ONE. Hence, whenever you call, it is heard and answered before you make it. Then again, the physical act of calling for assistance from the ONE opens a communication portal, a wormhole between your physical reality and the ONE, which resonates beyond time and space.

Jim Marrs - Remote Viewing Aliens and UFOs [BRILLIANT] SIMON PARKES : The Project Avalon Interview. The UFO Masquerade - Dr Karla Turner. Dimensions - SOULSALIGHT. Ancient ET Lion Beings. This is from my male past life in Egypt around 12,600 B.C. The 5 Main Extraterrestrial Races In Contact With Earth Right Now: What You Need To Know. The Fifth Perspective: Transcending Space and Time. A Hathor Planetary Message through Tom Kenyon Entering into higher dimensions of consciousness requires a fundamental shift in perceived time and space. Zeta Reticulan Greys - SOULSALIGHT. Place of Origin: These beings are a product of this universe. They originally developed in the Zeta Reticuli binary star system, which is about 39 light years from Earth. Humans Are Tricked Into Staying Inside The Saturn Matrix. GoodETxSG Part II - Secret Space Program, ET Federation Delegation & MILAB Participant.

Arcturian Activation !!! The 3 Earth Grand Experiments. First Earth - Lyra (Vega Star System) Long ago, before time as we know it began, there were the Founders of the Universe, highly evolved souls that had already completed many universal games. Being creator gods, they decided to create a universe of their own. WE ARE ALL OF THE MULTIVERSE. Nava lenticulara (The Lenticular Spacecraft) Gallery 3 : Voyage to Infinity with Dolphins, Whales and Dragons. Physical Encounters With Benign Reptilian Humanoids (Part One) Earth Fields. Seven Solar Logoi. Nemesis: the Restorer of Cosmic Order. Drawings. Message from the Arcturians: Stepping Out of the 3D Matrix - November 12, 2014. Judy beebe. Planetary Ascension. The Breathing Mind by Our Higher SELF. Joan Ocean and E T FRIENDS welcome you to the Multiverse - Dolphins & Teleportation Symposium 2011 with Joan Ocean - Andrew Basiago - Laura Magdalene Eisenhower - Alfred L. Webre - Jean-Luc Bozzoli - TIME TRAVEL and Dolphins - Hawaii, June, 2011 - UFO mag.