Binary Download - Open Source - WiseMapping. Installation Steps Before starting the installation, you must have Java Development Kit 7 or higher installed. 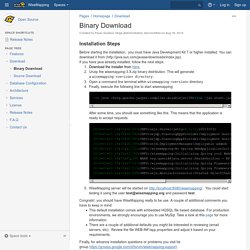 You can download it from ( If you have java already installed, follow the next steps: How to install Mantis Bug Tracker on Debian 7 (wheezy) The following article will teach you how to install and set-up Mantis BT on your Debian Wheezy Linux VPS. 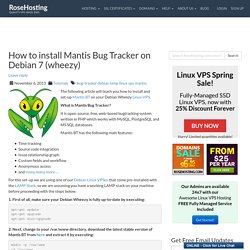 What is Mantis Bug Tracker? It is open-source, free, web-based bugtracking system written in PHP which works with MySQL, PostgreSQL and MS SQL databases. Mantis BT has the following main features: Time trackingSource code integrationIssue relationship graphCustom fields and workflowAnonymous accessand many many more… For this set-up we are using one of our Debian Linux VPSes that come pre-installed with the LAMP Stack, so we are assuming you have a working LAMP stack on your machine before proceeding with the steps below. How To Install Linux, Apache, MySQL, PHP (LAMP) stack on Ubuntu.

This tutorial applies to Ubuntu 12.04 - Are you running a more up-to-date version of Ubuntu? 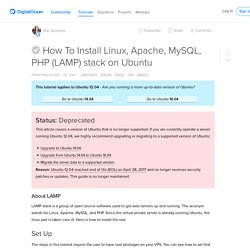 Go to Ubuntu 14.04 Go to Ubuntu 16.04 Status: Deprecated This article covers a version of Ubuntu that is no longer supported. Artifactory on Ubuntu 14.04 - Natural Born Coder. As part of a new continuous integration (CI) server build I need to install a Maven repository manager or software repository. 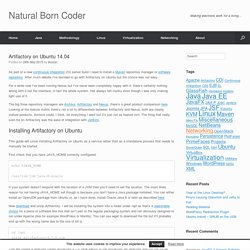 After much debate I’ve decided to go with Artifactory on Ubuntu but the choice was not easy. For a while now I’ve been running Nexus but I’ve never been completely happy with it, there’s certainly nothing wrong with it but the interface, in fact the whole system, has always felt clunky even though I was only making light use of it. The big three repository managers are Archiva, Artifactory and Nexus, there’s a great product comparison here. Looking at the feature matrix there’s not a lot to differentiate between Artifactory and Nexus, both are clearly mature products. Archiva could, I think, do everything I want but it’s just not as feature rich.

How To Configure Nginx with SSL as a Reverse Proxy for Jenkins. Introduction By default, Jenkins comes with its own built in web server, which listens on port 8080. 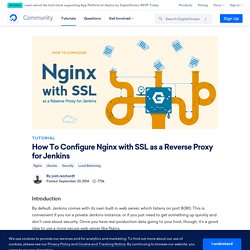 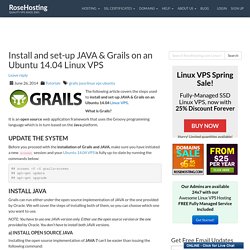 What is Grails? It is an open source web application framework that uses the Groovy programming language which is in turn based on the Java platform. Before you proceed with the installation of Grails and JAVA, make sure you have initiated a new screen session and your Ubuntu 14.04 VPS is fully up-to-date by running the commands below: ## screen -U -S grails-screen ## apt-get update ## apt-get upgrade. 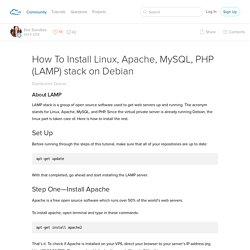 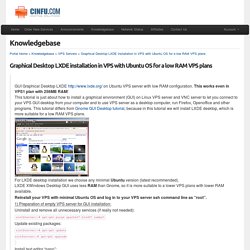 This works even in VPS1 plan with 256MB RAM! This tutorial is just about how to install a graphical environment (GUI) on Linux VPS server and VNC server to let you connect to your VPS GUI desktop from your computer and to use VPS server as a desktop computer, run Firefox, Openoffice and other programs. This tutorial differs from Gnome GUI Desktop tutorial, because in this tutorial we will install LXDE desktop, which is more suitable for a low RAM VPS plans. TUTO: Installer son serveur dédié VPS 2013 et 2015 OVH de A à Z + ISPCONFIG + Site - Configuration et utilisation de PrestaShop. Ubuntu VPS Step-By-Step Configuration Notes - Learn-a-holic Geek Notes. UPDATED (June 30th, 2015) Changes: June 30th, 2015 Covering Ubuntu 14.04 LTS.Adde extra SSH security, using Public Keys and some more tweaks in sshd_config.Added usual PHP & MySQL install and configure.Using service <COMMAND><ACTION> seems Ubuntu nowdays have problem with /etc/init.d, it is old school, but I’ve liked it. 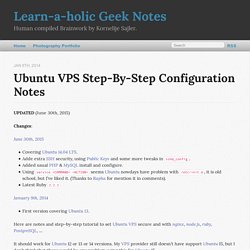 Complete Newbie Guide To Build CentOS Server To Host Websites - ServerMom. This is the ultimate guide how to build, setup and config CentOS-based unmanaged web server on VPS or Dedicated servers. 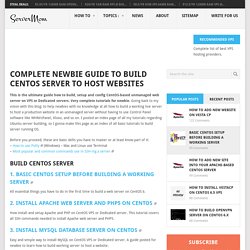 Very complete tutorials for newbie. Going back to my vision with this blog: to help newbies with no knowledge at all how to build a working live server to host a production website in an unmanaged server without having to use Control Panel software like WHM/cPanel, Kloxo, and so on. I posted an index page of all my tutorials regarding Ubuntu server building, so I gonna make this page as an index of all basic tutorials to build server running OS. Before you proceed, these are basic skills you have to master or at least know part of it: – How to use Putty (Windows) – Mac and Linux use Terminal – Most popular and common commands use in SSH-ing a server. Install Jenkins on an Ubuntu 14.04 VPS. In this article we will show you how to install Jenkins on an Ubuntu 14.04 VPS. Jenkins is an award-winning application that monitors executions of repeated jobs, such as building a software project or jobs run by cron. Among those things, current Jenkins focuses on building/testing software projects continuously.

In a nutshell, Jenkins provides an easy-to-use so-called continuous integration system, making it easier for developers to integrate changes to the project, and making it easier for users to obtain a fresh build. The automated, continuous build increases the productivity. Builds can be started by various means, including being triggered by commit in a version control system, scheduling via a cron-like mechanism, building when other builds have completed, and by requesting a specific build URL.