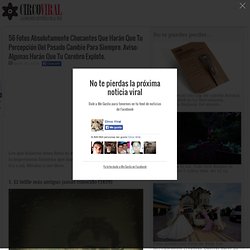 Míralas y me dices. 1. El Selfie más antiguo jamás conocido (1839) Philosophy Posters by Max Temkin. Philosophy is the study of general and fundamental problems, such as those connected with existence, knowledge, values, reason, mind, and language. 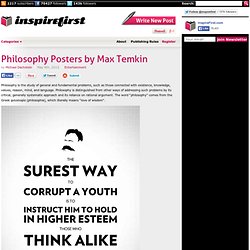 Philosophy is distinguished from other ways of addressing such problems by its critical, generally systematic approach and its reliance on rational argument. The word “philosophy” comes from the Greek φιλοσοφία (philosophia), which literally means “love of wisdom“. More Posters You might also like Comments Michael Dachstein Inspiration junkie :) 30 Fantastic Websites To Lose Yourself In. If you follow me on Twitter you might know that I moved to London last September. 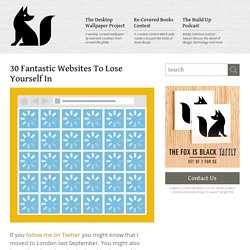 You might also know that since then I’ve had nothing but trouble trying to get an Internet connection set up in my home. Fortunately, last week I finally got everything up and running and to mark my triumphant return to the world of the Internet I went a little crazy and shared 30 of my favourite websites on Twitter. The majority of them are single-serving sites. Some are very useful while others, others just plain entertaining. Bobby enjoyed the list so much that he suggested I share it with you. Amazing Buildings Inside Caves. We may not be cavemen anymore but some people still want to go back to that age. 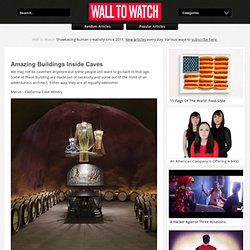 Some of these building are made out of necessity and some out of the mind of an adventurous architect. Either way, they are all equally awesome! Merus - California Cave Winery Pionen - Sweden Cave Office Stockholm Cave Subway Cappadocia Cave Hotel Post Office – Slovenia Fire Station – Italy Cave House – Switzerland Cave Bar - Majorca. 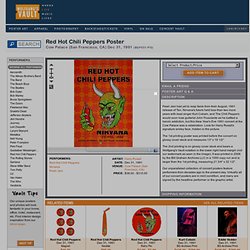 We have acquired each item from its original artist, the production company that staged the concert, the photographer that took the photograph or the performer that played the music. In some cases, we have purchased from the secondary market only after carefully verifying authenticity and condition. The vast majority of our collection comes from the archives of Bill Graham Presents, which was carefully managed by BGP from 1966 until our acquisition, and is now managed and preserved by The Vault. Upon request, we offer Certificates of Provenance signed by the archivist. I have seen posters you have on your website offered for lower prices on other sites and in online auctions. We own the copyright to posters in the BG (Bill Graham), BGP (Bill Graham Presents), F (Fillmore), BGSE (Bill Graham Special Events), FME (Fillmore East), FDN (Fillmore Denver) and many in the Commemorative Series (COMM). 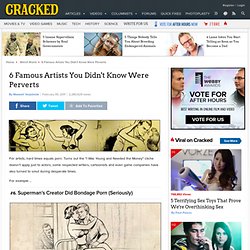 Steampunk Clock Art By Sue Beatrice. Steampunk is a term that is used to describe a specific style of art, jewelry or fashion. 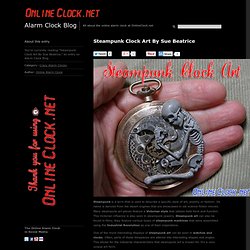 Its name is derived from the steam engines that are showcased in old science fiction movies. Many steampunk art pieces feature a Victorian style that utilizes both form and function. This Victorian influence is also seen in steampunk jewelry. Steampunk art can also be found in films; they feature various types of steampunk machines that were assembled using the Industrial Revolution as one of their inspirations.

One of the more interesting displays of steampunk art can be seen in watches and clocks. Sue Beatrice is a New Jersey artist who has worked extensively with steampunk art. It is not clear why Beatrice chose to start doing steampunk art; however, her thousands of Disney assignments may have something to do with that choice. Sue Beatrice uses actual parts from a wrist watch to sculpt figures. J. Krishnamurti Online. Página oficial de las enseñanzas auténticas de Jiddu Krishnamurti. Street Graffiti Art by Mobstr. 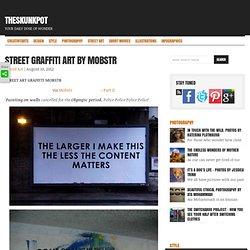 Illustration Section. Unusual stairs. Unique and creative designs of stairs from around the world. 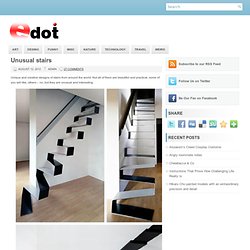 Not all of them are beautiful and practical, some of you will like, others – no, but they are unusual and interesting.