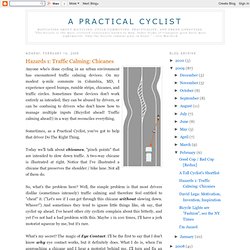 On my modest 9-mile commute in Columbia, MD, I experience speed bumps, rumble strips, chicanes, and traffic circles. Sometimes these devices don't work entirely as intended; they can be abused by drivers, or can be confusing to drivers who don't know how to manage multiple inputs (Bicyclist ahead! Traffic calming ahead!) In a way that reconciles everything. Sometimes, as a Practical Cyclist, you've got to help that driver Do The Right Thing. Today we'll talk about chicanes, "pinch points" that are intended to slow down traffic. So, what's the problem here? What's my secret? Try this the next time you come upon a pinch point (and 3-way traffic circles are analogous to chicanes in this context). TrafficCalming.org. DOT - Street Design Manual. Standards for Highways. On this site you will find many invaluable documents relating to the design, construction and maintenance of highways. 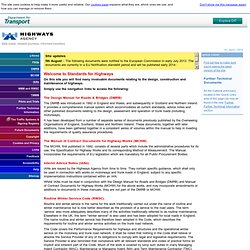 Simply use the navigation links to access the following: The Design Manual for Roads & Bridges (DMRB) The DMRB was introduced in 1992 in England and Wales, and subsequently in Scotland and Northern Ireland. It provides a comprehensive manual system which accommodates all current standards, advice notes and other published documents relating to the design, assessment and operation of trunk roads (including motorways). It has been developed from a number of separate series of documents previously published by the Overseeing Organisations of England, Scotland, Wales and Northern Ireland.

The Manual of Contract Documents for Highway Works (MCHW) The MCHW, first published in 1992, consists of several parts which include the administrative procedures for its use, the Specification for Highway Works and its corresponding Method of Measurement. Interim Advice Notes (IANs) Links. Design Manual for Roads and Bridges. Traffic Calming 101. “In almost all U.S. cities, the bulk of the right-of-way is given to the roadway for vehicles, the least to the sidewalk for pedestrians… just suppose that Americans were to extend their walking radius by only a few hundred feet. 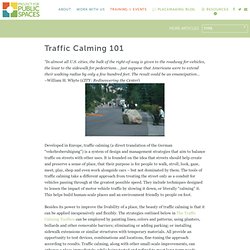 The result could be an emancipation… –William H. Whyte (CITY: Rediscovering the Center) Developed in Europe, traffic calming (a direct translation of the German “vekehrsberuhigung”) is a system of design and management strategies that aim to balance traffic on streets with other uses. It is founded on the idea that streets should help create and preserve a sense of place, that their purpose is for people to walk, stroll, look, gaze, meet, play, shop and even work alongside cars – but not dominated by them.

The tools of traffic calming take a different approach from treating the street only as a conduit for vehicles passing through at the greatest possible speed. Before Traffic Calming: Major Considerations. Pedestrian planning and design guide. PEDSAFE. Accessibility for the Disabled. Chapter 9. Traffic Calming. The Institute of Transportation Engineers defines traffic calming as "the combination of mainly physical measures that reduce the negative effects of motor vehicle use, alter driver behavior, and improve conditions for nonmotorized street users" (Institute of Transportation Engineers, 1999). 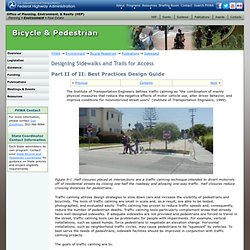