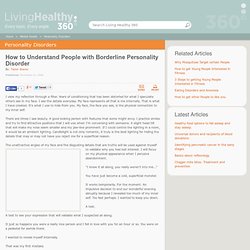 There are times I see beauty. The unattractive angles of my face and the disgusting details that are truths will be used against myself to validate why you had lost interest. "I knew it all along, you really weren't into me... " You have just become a cold, superficial monster. It works temporarily. A test. A test to see your expression that will validate what I suspected all along. It just so happens you were a really nice person and I fell in love with you for an hour or so. I wanted to reveal myself internally. That was my first mistake. You reacted normally. After I reflect on the drama and you're left wondering what went wrong, I feel that pain again.

I wait for your call. I have just created a scenario to be abandoned. It worked. Standing in front of the mirror, viewing my reflection, I pull back a tight-nasal-breath from my sinuses. Coercion. Overview[edit] The purpose of coercion is to substitute one’s aims to those of the victim. 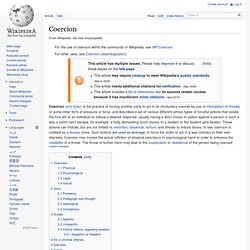 For this reason, many social philosophers have considered coercion as the polar opposite to freedom. [citation needed] Various forms of coercion are distinguished: first on the basis of the kind of injury threatened, second according to its aims and scope, and finally according to its effects, from which its legal, social, and ethical implications mostly depend. Physical[edit] Physical coercion is the most commonly considered form of coercion, where the content of the conditional threat is the use of force against a victim, their dear ones or property. Armed forces in many countries use firing squads to maintain discipline and intimidate the masses, or opposition, into submission or silent compliance.

Psychological[edit] In psychological coercion, the threatened injury regards the victim’s relationships with other people. Legal[edit] Social[edit] Some people[who?] Coercive persuasion. Mind control (also known as brainwashing, coercive persuasion, thought control, or thought reform) is an indoctrination process which results in "an impairment of autonomy, an inability to think independently, and a disruption of beliefs and affiliations. 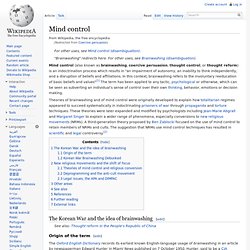 In this context, brainwashing refers to the involuntary reeducation of basic beliefs and values"[1] The term has been applied to any tactic, psychological or otherwise, which can be seen as subverting an individual's sense of control over their own thinking, behavior, emotions or decision making. Theories of brainwashing and of mind control were originally developed to explain how totalitarian regimes appeared to succeed systematically in indoctrinating prisoners of war through propaganda and torture techniques. These theories were later expanded and modified by psychologists including Jean-Marie Abgrall and Margaret Singer to explain a wider range of phenomena, especially conversions to new religious movements (NRMs). 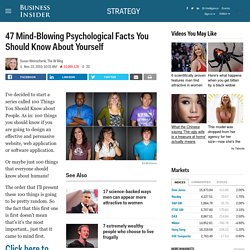 As in: 100 things you should know if you are going to design an effective and persuasive website, web application or software application. Or maybe just 100 things that everyone should know about humans! The order that I’ll present these 100 things is going to be pretty random. So the fact that this first one is first doesn’t mean that’s it’s the most important.. just that it came to mind first. The 48 Laws of Power. 25 Facebook Tips and Tricks you should be aware of. 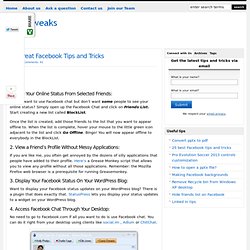 Hide Your Online Status From Selected Friends: So you want to use Facebook chat but don’t want some people to see your online status? Simply open up the Facebook Chat and click on Friends List. Start creating a new list called BlockList. Once the list is created, add those friends to the list that you want to appear offline to. 2. If you are like me, you often get annoyed by the dozens of silly applications that people have added to their profile. 3.

Want to display your Facebook status updates on your WordPress blog? 66 - Various relationships.

Related:  I've learnt that...   -  47 Mind-Blowing Psychology-Proven Facts You Should Know About Yourself   -  25 Facebook Tips and Tricks you should be aware of   -  Education   -  Enterprise