I have too many interests and so my days are full...sometimes i even manage an afternoon nap.. between all my projects.. sol is a big help. 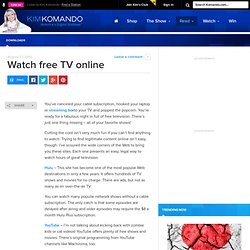 You’re ready for a fabulous night in full of free television. There’s just one thing missing – all of your favorite shows! Cutting the cord isn’t very much fun if you can’t find anything to watch. Trying to find legitimate content online isn’t easy, though. I’ve scoured the wide corners of the Web to bring you these sites. Hulu – This site has become one of the most popular Web destinations in only a few years.

Apps to save money on calls and texts. Since the dawn of the cellular age, phones have required three things to operate: bars, batteries and minutes. 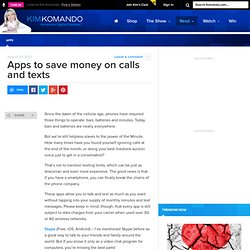 Today, bars and batteries are nearly everywhere. But we’re still helpless slaves to the power of the Minute. How many times have you found yourself ignoring calls at the end of the month, or doing your best livestock auction voice just to get in a conversation? That’s not to mention texting limits, which can be just as draconian and even more expensive. The good news is that if you have a smartphone, you can finally break the chains of the phone company. Untitled.

FASHION BLOG. How to Knit Videos from Love of Knitting - Slip, slip knit. Best Airport Reading - Top Airport Reads - Books to Read in the Airport. Airport reading needs to be fast paced enough to make your wait fly by and engaging enough to keep your attention from people watching or staring at whatever is playing on the airport news channel. 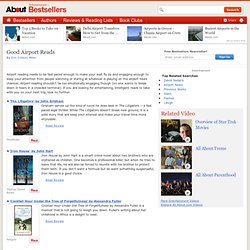 Airport reading shouldn't be too emotionally engaging though (no one wants to break down in tears in a crowded terminal). If you are looking for entertaining, intelligent reads to take with you on your next trip, look no further. 'The Litigators' by John Grisham Doubleday Grisham serves up the kind of novel he does best in The Litigators -- a fast paced legal thriller. 'Iron House' by John Hart Thomas Dunne Books Iron House by John Hart is a smart crime novel about two brothers who are orphaned as children. 'The Mill River Recluse' by Darcie Chan Darcie Chan The Mill River Recluse by Darcie Chan was one of the surprise bestsellers of 2011. 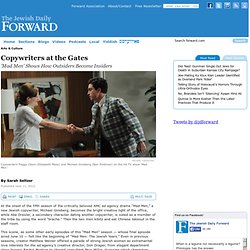 By Sarah Seltzer Published June 11, 2012. At the onset of the fifth season of the critically beloved AMC ad agency drama “Mad Men,” a new Jewish copywriter, Michael Ginsberg, becomes the bright creative light of the office, while Abe Drexler, a secondary character dating another copywriter, is outed as a member of the tribe by using the word “bracha.” This scene, as some other early episodes of this “Mad Men” season — whose final episode aired June 10 — felt like the beginning of “Mad Men: The Jewish Years.” But such shtick, whether as text or subtext, was never the point. Jews are far from the only group that has gone through that transition on “Mad Men.” As the fifth season began, the show’s writers plunked another new character, Ginsberg, down into those hallways. Firefox Tip – Tell Sites You Don’t Want to Be Tracked. When you browse, you leave a trail of data that potentially contains all sorts of personal information. 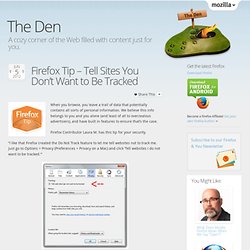 We believe this info belongs to you and you alone (and least of all to overzealous advertisers), and have built in features to ensure that’s the case. Firefox Contributor Laura M. has this tip for your security. “I like that Firefox created the Do Not Track feature to let me tell websites not to track me. Just go to Options > Privacy (Preferences > Privacy on a Mac) and click ‘Tell websites I do not want to be tracked.'” How to Knit the Ostrich Plume Stitch. How to Knit the Lacy Diamond Stitch. How to Knit the Fishtail Cable Stitch. This video knitting tutorial will help you learn how to knit the fishtail cable stitch. 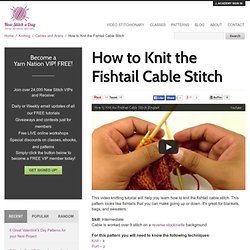 This pattern looks like fishtails that you can make going up or down. It’s great for blankets, bags, and sweaters. Skill: Intermediate Cable is worked over 9 stitch on a reverse stockinette background For this pattern you will need to know the following techniques:Knit – kPurl – p Left Cable 4 – LC4 Right Cable 4 – RC4 Row 1: K9 Row 2: P9 Row 3: (For tail going down) LC4, k1, RC4 (For tail going up) RC4, k1, LC4 Row 4: P9 Row 5: K9 Row 6: P9 Repeat rows 1 – 6 until you have reached your desired length. Multimedia. Daily Knitting Stitch: How to Knit the Simple Garter Lace Stitch - kantor.shula - Gmail.